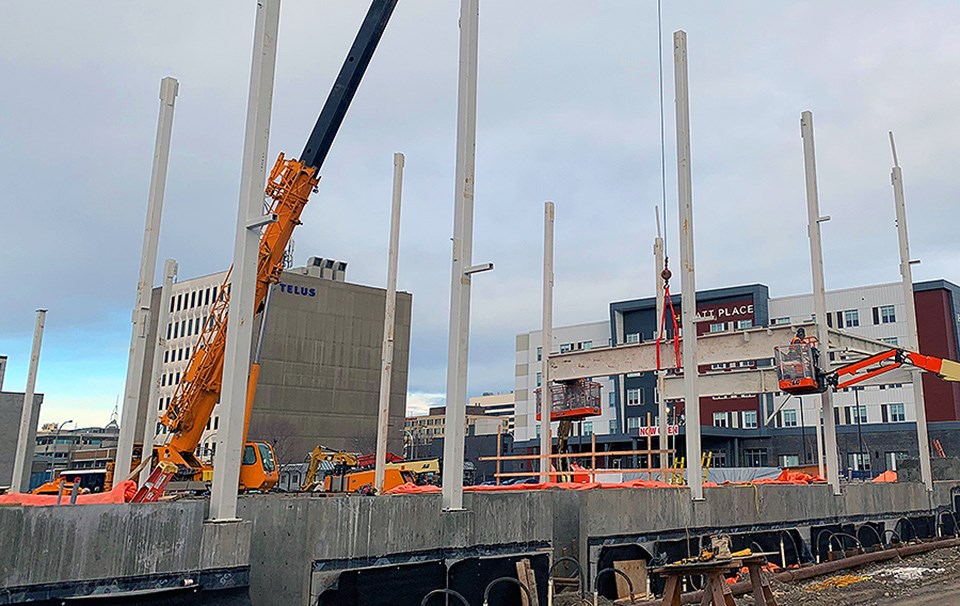 Beams going up in the new downtown pool construction. City of Prince George

The face of downtown Prince George is changing once again as the new pool being constructed is beginning to take its shape.

This morning (Jan. 13), according to an update from the city, crews began installing large steel beams at the $42-million project site near Dominion Street and between Seventh and Sixth Avenues.

Roughly three- to four-dozen steel columns, some as long as 15 metres, will be erected at the site in the months to come, the city adds.

"This phase of the operation will involve the construction of the pool’s mechanical rooms and penthouse level, as well as the change rooms," reads a City of Prince George release as it anticipates this particular period to go well into the spring.

Construction of the building envelope will be the next step.

"Last month, crews with Chandos Construction finished the facility's concrete building foundation, which was the first phase of the construction operation."

However, ongoing construction means there's going to be some traffic disruptions if commuters need to navigate through downtown.

Traffic signals will stay flashing red at the Seventh Avenue and Dominion Street intersection and will continue to function as a four-way stop.

The same intersection is also expected to experience varying levels of disruption to accommodate the project's construction on this project until later in the winter.

At various times, sections of Dominion Street between Seventh Avenue and Sixth Avenue, along with parts of Seventh Avenue between Dominion and Quebec Street, will need to be closed and reduced to two-lane traffic in both directions.