The father of a teenage boy who died from injuries suffered in a car crash took Prince George high school students Thursday through the emotional roller coaster parents endure when they have lost a son or daughter to something that occurs all too oft
Apr 3, 2015 11:23 AM By: Mark Nielsen 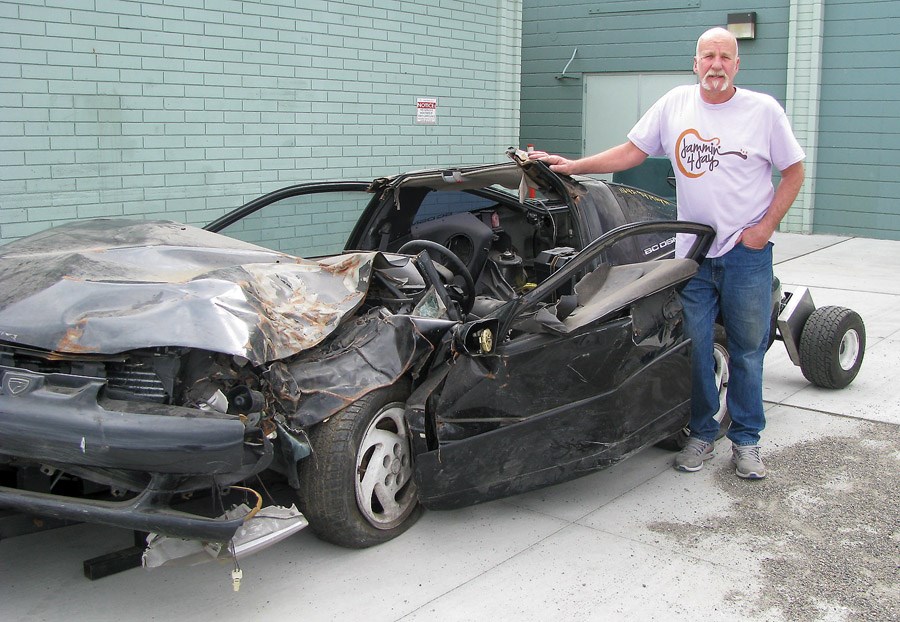 Greg Drew stands next to the car his son Jay crashed in 2003. A firefighter, Drew had to rescue his son from the wreck only to see him die later in hospital.Citizen photo by Mark Nielsen

The father of a teenage boy who died from injuries suffered in a car crash took Prince George high school students Thursday through the emotional roller coaster parents endure when they have lost a son or daughter to something that occurs all too often.

Greg Drew was often tearful as he told a story filled with frustration and looked back on what happened and how maybe, just maybe, the death of Jason "Jay" Drew at a mere 17 years old could have been prevented.

His message? That mom and dad really do have your best interests at heart when they lecture you on the dangers of speeding, not wearing a seatbelt, texting while driving or getting behind the wheel after having too much to drink.

"My son wouldn't listen to me because I was his dad," Drew said in an interview following an hour-long presentation before about 150 students at the Centre for Learning Alternatives.

Such untimely deaths have a ripple effect that spreads well beyond the victim.

"It affects everybody. Kids don't understand that; they think their actions won't affect anybody else," Drew said.

While Jay was blocking out his parents, he was paying close attention to Fast and Furious, the 2003 action movie in which stunt drivers were the real stars of the show. If there was a disclaimer "don't try this at home," he ignored it.

In the two weeks prior to his fatal collision with a tree off the bend of a Langley road, Jay had twice gone off the pavement while trying to "drift" his car around the curve.

The collision occurred during the early morning hours of May 11, 2003. He left skid marks the length of a high school gym and hit the tree with such force the car went up on its nose, twirled 180-degrees and landed facing back in the direction he had come from.

Jay was still conscious and able to use his cellphone call his mother on what happened to be Mother's Day.

Drew, who happened to make a living as a firefighter and had seen his share of serious crashes, went to the scene. Even by his standards, the site was horrific - he found his son trapped in wreckage so twisted it took rescuers an hour-and-a-half to extract him and so compressed his shattered femur was pushed back to his ear.

But Drew was certain he would survive and, while they waited in the hospital, he asked Jay if he would talk to other teens about his experience once he was out.

"He said 'as soon as you wheel me out the front door, I will start talking,'" Drew said.

That was not to be. An embolism from the injuries suffered down below traveled up into his brain and he had to be put on life support. Three days later, doctors concluded it was hopeless and he was taken off.

"It took less than 10 seconds for my son's heart to stop beating and flatline," Drew said as he sobbed. "Do you know what it's like as a parent to hold your kid's hand his heart beats its last beat? What a failure I felt, I let my kid die."

The fallout went beyond Jay's immediate family - his death threw a major damper on graduation ceremonies at his high school, turning a celebration into a tear-sodden memorial for many.

Drew's presentation, often full of blunt talk, struck a chord. Students looked subdued and roundly warned as they left the gym and went outside to take a look at the car Jay had turned into crumpled metal and Drew now tows along with him as he travels cross-country to tell his story.