Louise Holmes and her Mother’s Day tradition began after her mom died in 2009. Every year on the day she visits her grave at Prince George Cemetery to have a few quiet moments alone to rekindle memories of the times she spent with her mom.
May 9, 2021 3:52 PM By: Ted Clarke 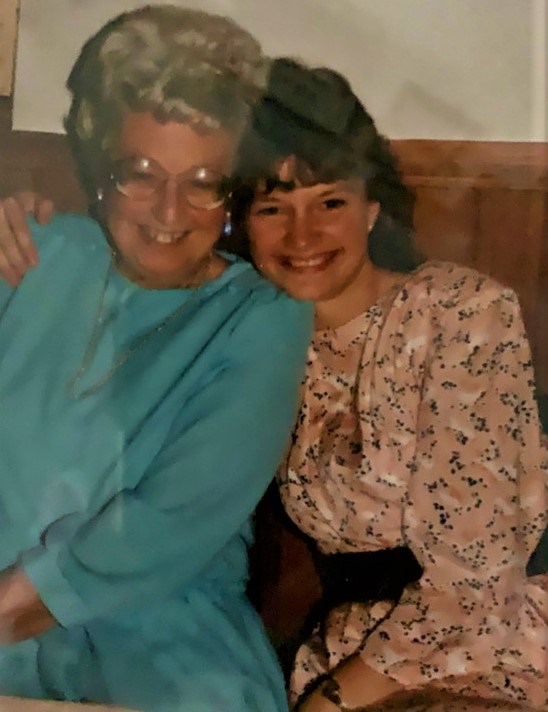 Louise Holmes and her mother Barbara share a moment together in 1992. Louise was reminded of the kindness of people she didn't know when she visited her mother's grave Sunday morning on Mother's Day.Handout photo

Louise Holmes and her Mother’s Day tradition began after her mom died in 2009.

Every year on the day, she visits her grave at Prince George Cemetery to have a few quiet moments alone to rekindle memories of the times she spent with her mom.

Holmes was close to her mother and when she died at age 76, it left a huge void. Mother’s Day is a reminder of the woman she was and a time to reflect on the good times they had together growing up in Prince George with her dad and three siblings.

Those graveside visits often strike at her heartstrings and the emotions trickling out were obvious Sunday morning to a young man who was there with a relative visiting a nearby grave.

“I was just sitting there having my moment and he saw that I was tearing up and he had an extra little plant, I think it’s an African violet, and he came over and said, ‘Here you go, Happy Mother’s Day,’” said Holmes. “I totally didn’t know them and I just burst into tears again, it was so kind.”

That random act of kindness had a huge impact and brightened her day but there was also a second gesture from an older couple who had brought garden tools to cut back the grass growing around the grave of one of their loved ones.

“I think it was an aunt of hers and they were cutting the edge and tidying up the plaque on the ground, which is what my mom has too, and they had a rake and an edger and they both said to me, ‘Would you like us to do yours too?’ so they edged mine as well,” said the 53-year-old Holmes.

“I didn’t know these people and I was so touched by it. For me it was like my mom was talking through them. It was just a beautiful, kind thing for them to do. It was amazing.

“They saw I was struggling a bit. It’s a tough day and a lot of us experience this tough day. It was just so unbelievably kind and so appreciated. It just restores your faith in humanity.”

Holmes’s mother Barbara was a nurse in England when she immigrated to Canada in the 1950s. She was staying in a youth hostel in Vancouver in 1958 when she met her future husband, Jan Ullstrom, who had come over from Sweden. Within three months, they were engaged and they got married that year. Jan was a chartered accountant and with the expansion of the pulp mill industry they moved to Prince George in 1963, thinking they would stay for only six months.

But they liked the city, their permanent roots sprouted and they started a family. Barbara was a stay-at-home mom for the four kids. Louise is the youngest and it wasn’t until after she was in high school, preparing to go off to university to become a school teacher, that Barbara put her nursing skills back to work as a part-time administrator for the Child Development Centre. She was also a dedicated volunteer for the Hospital Auxiliary. At her funeral at St. Michael’s Church, a procession of ladies wearing their pink Hospital Auxiliary smocks followed the family members as they walked up the aisle to the service.

“She did a lot of volunteer work with the Hospital Auxiliary and with St. Michael’s Church and Grace Anglican Church, the churches my parents were heavily involved in,” said Holmes.

Jan is doing well and staying healthy, taking advantage of his Scandinavian genes. He just celebrated his 90th birthday on March 31st.