Mass timber construction on the rise

A new year brings new beginnings, and for Penticton-based Structurlam Mass Timber Corp., that includes building on key developments from last year. With its expertise in cross-laminated timbers, it welcomed changes in the B.C.
Jan 8, 2020 3:24 PM By: Peter Mitham 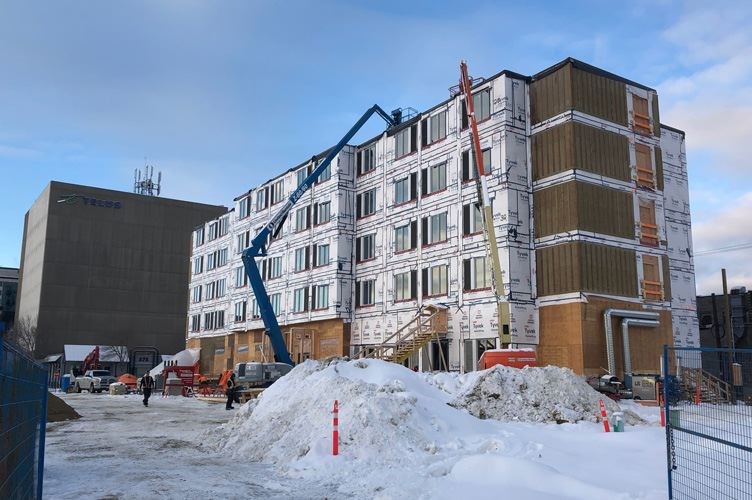 Construction continues on the 104-room Hyatt Place hotel, located at 585 Dominion St. downtown, on Jan. 8. The hotel is one of several projects in B.C. taking advantage of building code changes in the province allowing greater use of cross-laminated timber construction.Citizen staff photo by Arthur Williams

With its expertise in cross-laminated timbers, it welcomed changes in the B.C. Building Code last March allowing for mass-timber construction in buildings of up to 12 storeys. Canada's national building code will adopt similar rules this year.

Structurlam recently won a contract for the first project approved under the new B.C. code, a tower DB Services of Victoria Inc. is building in the Vancouver Island municipality of Langford. Other projects are in the planning stages, including one by Adera Development Corp. that includes mass timber as a component of its Quiet Home approach to construction, and an 83-room addition to the Ramada Kelowna Hotel & Conference Centre by RPB Hotels & Resorts of Penticton.

"I have never seen a code adoption happen so quickly in any of the other sectors I've been involved with," remarked Structurlam CEO Hardy Wentzel.

The changes in Canada parallel similar changes in the U.S., which now allows mass-timber construction in buildings of up to 18 storeys. Structurlam, which expanded its workforce to 290 with the addition of 70 people over the past year as capacity at its four B.C. plants grew, is building a fifth facility in Conway, Arkansas, to serve the U.S. That facility will open in 2021.

It's not just the new building code that's been adopted speedily. The buildings themselves rise quickly, with a minimal labour force. Brock Commons, the landmark 18-storey tower at the University of British Columbia that served as a precursor to the code changes, went up in just 57 days with a workforce of nine people.

"A construction site is actually more of an assembly site now than a construction site because so much of this is done in a factory," Wentzel said. "It's quite remarkable how much faster construction is, and when you do that you get to monetize your investment that much sooner."

Similar arguments have been voiced in favour of modular construction, which is enjoying popularity not only for low-income housing in Vancouver but also for hotels such as the new 104-room Hyatt Place in Prince George that Mundi Hotel Enterprises Inc. of Kamloops is developing with components from the Kamloops plant of Horizon North Logistics Inc. That hotel is set to complete next month.