Hanna Petersen
Jun 8, 2021 9:29 AM
Previous Next
1 / 1 A grizzly bear investigating a mark tree near the Kuzkwa River. FLNRORD
Expand
Previous Next

After a decade-long process, a rare grassland area in northern B.C. has been officially designated a Wildlife Habitat Area (WHA) to protect grizzly bears.

The now 6,983 ha area north of Fort St. James is one of the only grizzly bear Wildlife Habitat Areas in northern B.C.

It was established through collaboration between the Tl’azt’en First Nation and biologists at the Ministry of Forests, Lands, and Natural Resource Operations and Rural Development (FLNRORD).

It’s called Tl’o Ba which means ‘meadow on the edge’ in Dakelh.

“Ever since we go on the land the bears are always there they have been there forever,” said Art Pierre, a Tl’azt’en Elder and traditional Keyoh holder of the area known as Tl’o Ba.

“One story my brother told us was you can walk within 10 feet of a bear and you wouldn’t even know it.”

Although Tl’o Ba was always known as an important area for grizzly bears, work to protect it didn’t begin until Renel Mitchell, Natural Resources Coordinator with Tl’azt’en Nation, started looking for sensitive and rare habitat areas in the territory that needed to be flagged.

Mitchell asked Joanne Vinnedge, a senior ecosystem’s biologist with the ministry, who identified a rare grassland area along the Kuzkwa River, before bringing that information back to Pierre.

“He confirmed from his knowledge of the area that this is what we call ‘grizzly bear country’ and that this area is an important foraging area for grizzly bears and is along a salmon bearing creek.”

Mitchell said she thought working to protect this area would be a perfect partnership between FLNRORD and Tl’azt’en to pursue.

“I thought wow this is a perfect marriage as something an ecosystem biologist has recognized as a rare feature on the landscape and also something that a traditional knowledge holder understands to be an important habitat.”

Vinneedge explained the kind of field data that would be required to establish a WHA and they contacted Dr. Lana Ciarniello, who is a grizzly bear specialist in the Omineca area.

“It's harder to make a living as a bear in the north and so it's important to protect these areas that are critical habitats,” said Crianiello.

Her research found that Tlo’Ba was important for grizzly bears because it offers a complex of different habitat types in a small area.

It’s along a river which gives bears access to Interior fish. There are also stands of old growth Douglas fir trees and large meadow complexes full of early vegetation species and offers bears roots later in the season.

“Those are the kind of areas that when we look as a biologist that we start to say, are critical, because you contain a lot of resources in a smaller area for the animals.”

She says they also found a lot of marked trees and trails which bears use to communicate and is evidence the area is important for the species.

“To overall maintain the ecological diversity of these important, seasonal habitats on the landscape is not only beneficial for grizzly bears,” said Crianiello, adding that since grizzly bears have such large home ranges and diverse needs protecting them protects other species.

“I think it's really critical that. We start saving these areas in the Central Interior and the North and that we start using some of these wildlife habitat areas in there.”

WHAs designate critical habitats in which activities are managed to limit their impact on wildlife and to conserve those habitats.

“It allows government to actually set objectives and practice requirements for a specific area for a species,” explained Kevin Hoekstra, senior ecosystem biologist with FLNRORD.

“Within the order there is a whole suite of different practice, requirements, and objectives that apply to those management areas.”

When Mitchell first proposed the WHA in 2011 it was only 379 ha which just included the grasslands and immediate vicinity.

“When Lana did her research we really focused on, well, the bears forage here in the spring but they also need to access the whole river corridor for the fish, but actually there is also a whole bunch of denning features in that area as well,” said Mitchell.

In 2013, Conifex had planned several blocks in the area but after Mitchell explained what they were trying to do, the company agreed to drop a block which allowed the boundary to be expanded to 785.5 hectares.

“What we essentially did is that we recognized through the understanding of the bears’ ecology that a one season site is not sufficient. It has to encompass use throughout the year for all aspects of the bears’ lifecycle so we really kept pushing the limits of what FLNRO was willing to protect,” said Mitchell.

By the time the final version was drafted in 2018 it inlcuded 6,983 ha - which encompassed the grasslands, entire reach of Kuzkwa River with a one km buffer and the denning habitat in the immediate vicinity.

The Tl’o Ba Wildlife Habitat Area was officially established in December 2020 with two Ministerial Orders – one to protect the habitat area along the Kuzkwa River and the other to protect critical denning habitats.

“When you understand how little FLNRORD does to protect habitat getting a grizzly bear wildlife habitat area protected is almost unheard of,” said Mitchell.

“It’s really satisfying because this was something unprecedented and something they wouldn’t have normally done except for me and Joanne continually advocating and pushing the envelope and making the case that the whole habitat needs to be protected.”

Mitchell says one of the limitations to protecting critical habitats is that current Forest Practices Act has no triggers to protect wildlife beyond telling licensees when they’ve cut too much.

“I’d liken it to mining. They are just mining the forests with no forethought as to how to recover from this mass landscape devastation,” says Mitchell.  However, she says a little bit of change can go a long way to recovering wildlife habitat.

“Once of the most important things is to stop herbicide use and to stop manual brushing to let forest grow up with all of the bushy vertical complexity that promotes biodiversity and another is to start reducing the road density.”

Art Pierre, who still visits Tl’o Ba a few times of year on his trapline, said he’s happy to see the WHA established but would like to see more areas protected.

Mitchell said the celebratory note is that the WHA area was established through the marriage of traditional knowledge and wildlife biology science but the process needs to be replicated over and over again.

“It’s so important that First Nations gain access to the direct management and stewardship of their lands because they don’t have corporate interests to interfere with the proper management of lands and wildlife habitat,” added Mitchell.

“First Nations will provide the balance that is needed against the logging interests.” 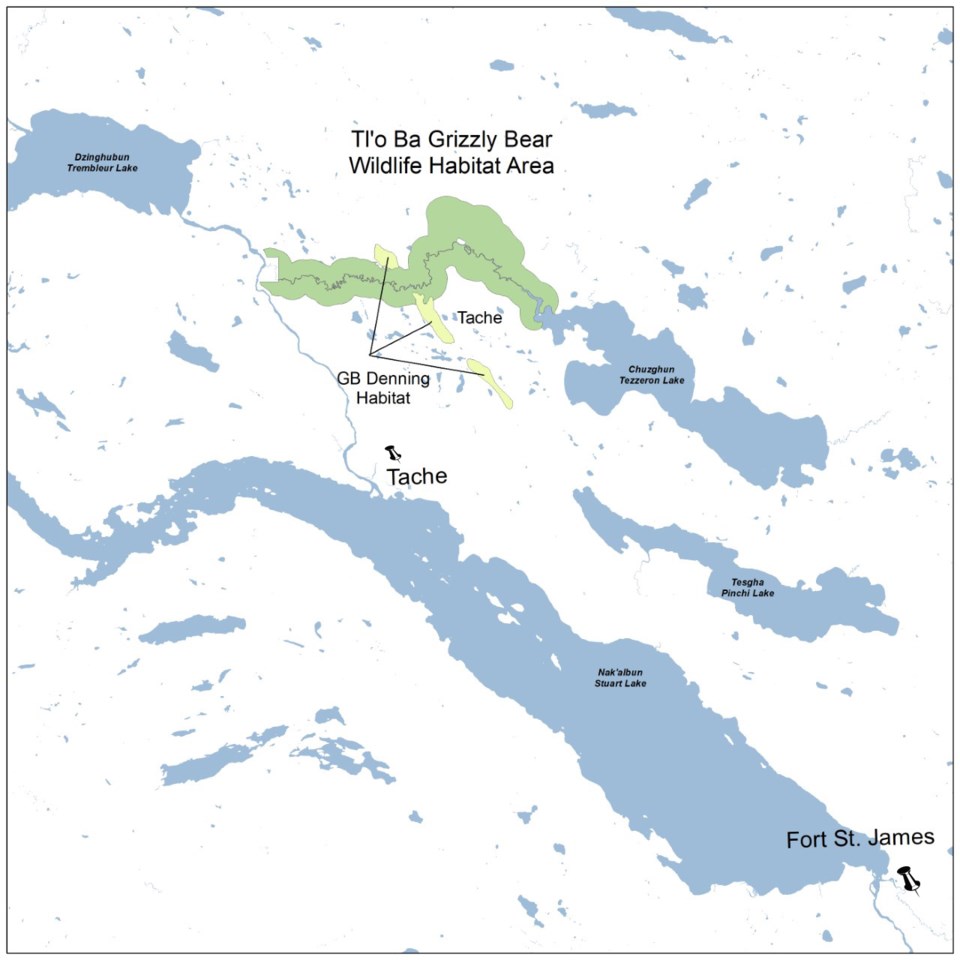