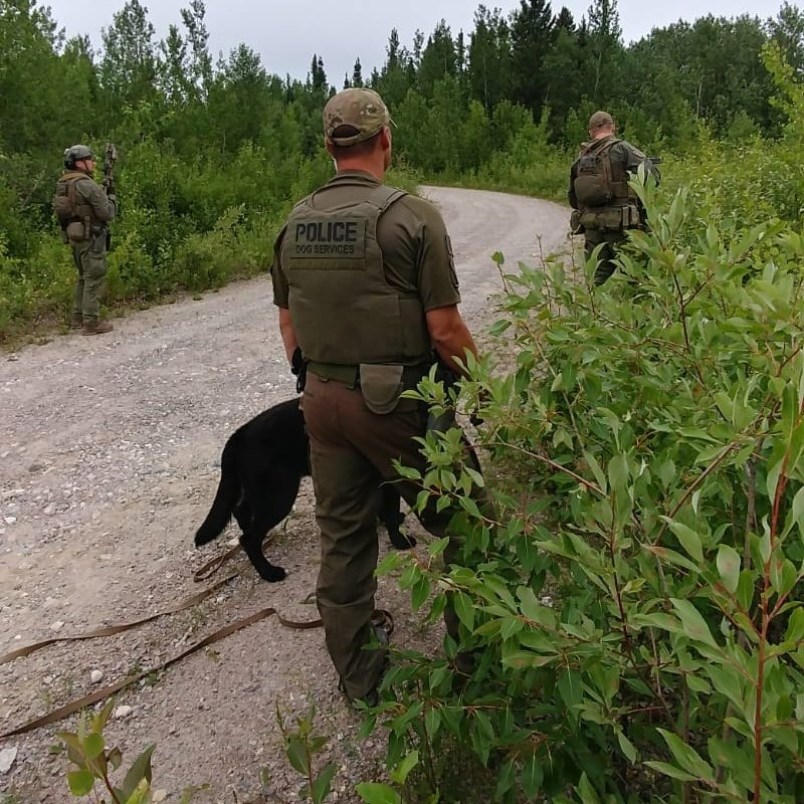 Police and search dogs search for the pair. (via Manitoba RCMP)

The Manitoba manhunt for two suspected B.C. killers continued Friday (July 26) with RCMP saying the pair may have altered their appearances, and that someone may have helped them inadvertently.

The search for Kam McLeod and Breyer Schmegelsky focused on the Gillam area Wednesday after the pair had been spotted in Saskatchewan. Their eastward movement spurred Ontario Provincial Police to issue a public warning.

Courchaine said that over the next three days, investigators would conduct door-to-door canvases in Gillam and Fox Lake Cree Nation, in hopes of generating new tips and information.

“Residents in these areas can be assured that we are activating all necessary resources to protect public and officer safety,” she said.

On Friday, Mounties also released video footage of the pair when they were in Meadow Lake on July 21.

Canada-wide warrants were issued and second-degree murder charges laid against McLeod and Schmegelsky in connection with the death of Leonard Dyck of Vancouver, who was found a few kilometres from the teens’ burned-out pickup truck on Highway 37 near Dease Lake on July 19.

McLeod, 19, and Schmegelsky, 18, are also suspects in the killings of Australian Lucas Fowler and American Chynna Deese; their bodies were found along the Alaska Highway near Liard Hot Springs on July 15.

No charges have yet been announced in that investigation.

RCMP spokeswoman said someone may have “inadvertently” given the pair assistance and are now embarrassed to come forward.

“If someone did, please come forward,” she said. “Maybe they didn’t realize they were helping them."

She said police have received dozens of tips.

“Our investigative team is going through them,” she said. “We need the public’s help.”

Weather conditions have been between cool and wet but police would not speculate on how the pair might be surviving.

McLeod and Schmegelsky were being described as armed and dangerous, the public being warned against approaching them.

Mounties said earlier they believed McLeod and Schmegelsky had remained in the Gillam area with at least two confirmed and corroborated sightings.

An abandoned vehicle found Monday near Gillam is the grey 2011 Toyota RAV 4 the teens were seen driving in Saskatchewan. The last confirmed sighting of the pair was July 22, before police recovered the vehicle.

Police earlier Friday were downplaying a photo that appeared overnight Thursday of a man claiming to be McLeod holding a newspaper with him and Schmegelsky on the front page.

Winnipeg RCMP were quick to discount the image on the force’s Twitter feed.

“We can confirm that the current photo circulating online of a man posing with the front page of yesterday’s paper IS NOT one of our suspects,” the tweet said.

The photo showed the man holding the newspaper with a campsite in the background.

“Gotta wonder if that guy can put one foot in Front of the other. Smiling about his similarity to a murderer,” one commenter on the Twitter feed wrote.

Police said the picture was unintentionally circulated on social media.