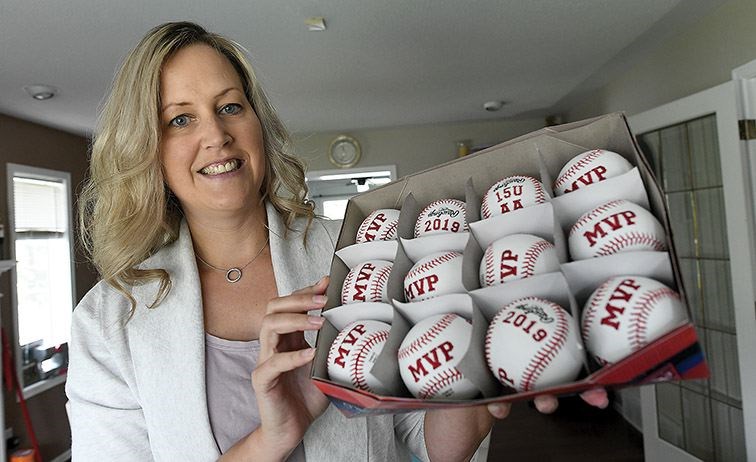 Terry Collins with some of the 80 baseballs she customized for the U15 Provincials held in Prince George this week.Brent Braaten, Photographer

B.C.'s top 15U baseball players are about to have a ball in Prince George.

This city is the host of the 2019 BC Minor Baseball Association's AA provincial tournament from Aug. 1-5 at the Nechako Park Fields (3303 North Nechako Road). The players are aged 14 and 15 (some variation depending on birthday), all able to play talented baseball and conscious of the surroundings when they visit a new place. It is an influx of some of the top teenaged baseball players in B.C.

More than 70 players will square off for provincial gold, but the competitive nature of this tournament is offset by sportsmanship and camaraderie.

One of those elements is the keepsake each player will get to take home from Prince George when the tournament is finished, thanks to the local host committee. Each athlete will received a baseball with the letters MVP stitched into the leather, a handmade gift unavailable from any factory. Each one was personally made by a local entrepreneur who supplies these unique items to the whole continent.

Terry Collins said that she once saw commemorative baseballs given as gifts, but the custom lettering was a vinyl overlay.

She grew up the daughter of a professional embroiderer and had inherited her late mother's stitching machine. She knew she could do something better than a glorified sticker.

"I stole one of Lyle's baseballs (her husband, Lyle Boutin, is a noted local player and coach) and took it apart to see how it was made, and how it might go back together again," said Collins.

"It all worked. The machine can easily stitch through the leather, and it just means I have to hand-stitch the covers back on when I'm done."

She started making them for her son Colton's team. They were a hit - a conversation piece that took off. Someone suggested she look at selling this service on the Etsy website. Collins had never heard of it, so after some quick research she understood the possibilities.

Collins now gets orders from all over North America for small batches of commemorative custom embroidery on baseballs. Some have a player's name, some have topical words like Most Sportsmanlike or Best Coach. This set of 72 is the largest single order she's ever done, and it was for her hometown youth baseball association.

She is also the volunteer uniform manager for PGYBA, baseball is close to her heart, but she hadn't imagined doing anything for the 15U provincials beyond arranging the outfits for the Prince George Knights all-star team, as per usual.

When the organizing committee came to her asking if she was available to make special keepsakes for all the players coming from across the province, she couldn't say no. She has budgeted how many she must do per day to complete the order, and she is sticking to it with military commitment.

"This is just a hobby, really, and it helps pay my vacation fund," she said. "I do it because I know people really like them and nobody else is doing it, and it keeps my hands busy when I can't sit still."

Collins' business can be found on Etsy under her business name Wall Of Thread.

Prince George non-profits get funding for expanded mental health, addictions services
May 13, 2021 11:54 AM