A set of opposition MLAs was in Prince George for a roundtable meeting with forest companies and those who do business with the forest industry. The Prince George Chamber of Commerce hosted the meeting, with its board room full to capacity.
Jul 12, 2019 11:00 PM By: Frank Peebles 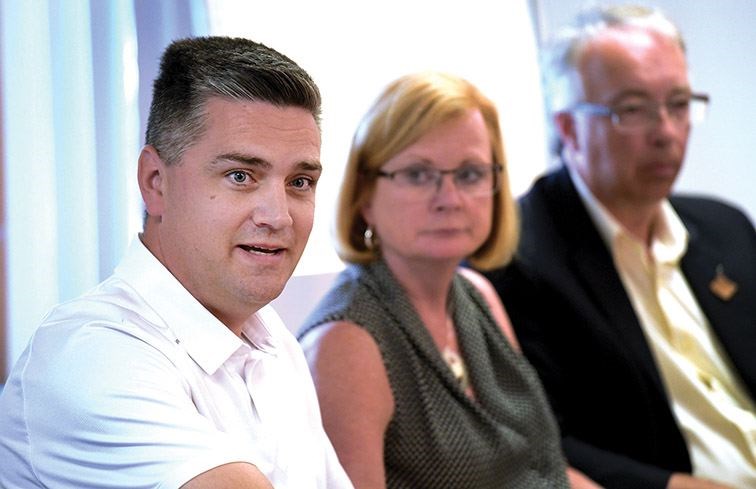 A set of opposition MLAs was in Prince George for a roundtable meeting with forest companies and those who do business with the forest industry.

The Prince George Chamber of Commerce hosted the meeting, with its board room full to capacity.

The elected officials present included Shirley Bond, John Rustad, Mike Morris, Todd Stone and Tracy Redies, plus mayor Lyn Hall. It was convened by Chamber CEO Todd Corrigall, who made sure the room was populated as much by bankers and accountants and small-business owners as by those who operate directly with forest products.

"The benefit of the Chamber is understanding how all of our industries tie together," Corrigall said. "When changes happen to top-tier employers, the residual economic impacts translate to the entire community."

"As the changes happen, and an employee sees less and less income, that is immediately translated to the local economy, because there is less money spent on vehicles, homes, furniture, dinners out. The thought process behind this was, we need to be inclusive of the industries that will be impacted long-term over any changes to our economy as a whole."

The MLAs heard the stories of the local businesses, to gather information to form a response to government. This was not the first such roundtable held by these MLAs, and more are planned. As opposition critics, they were already of the view that the current government was not doing enough to help communities hurt by the state of today's forest industry, and expressed concerns that the downturn the forest sector was going beyond the pre-calculated shortfall in timber due to the mountain pine beetle disaster and the mega-fires in the forest the past few years.

"Contractors, hundreds of contractors, they have no Employment Insurance. So how are we going to help them?," asked Bond, drawing to the point that forest companies are only one level of the impacted sector. Most people who make their living from the forest are in fact the suppliers of goods and services, most of them self-employed or employed by small independent businesses not the major players like Canfor or West Fraser.

Bond also worried out loud about the mental health supports that she feared were not in place in small forest-based communities. When people fear for their jobs, it might not reach the level of medical depression (although it can), but the stress can lead to poor decision-making for small businesses and families.

"This isn't about which government is there. It is about the government being there, on the ground, being a catalyst for supporting communities," Bond said, on behalf of the MLA group. "Yes, there are big forestry issues out there that we are not going to solve in the next month, or six months, necessarily, but somebody could lose their home during that period of time. There are services on the ground that are simply not being activated."

The conversation as a whole, said Corrigall, would feed into the larger BC Chamber of Commerce voice that has the ear of the provincial government. It would also leave the room with those who participated who would be better informed about how to address the complex set of forestry circumstances with their clients and customers, their professional associations and head offices.

The MLAs, meanwhile, are heading into their next rounds of caucus meetings where their political responses would be better informed.