Patience is wearing thin for the Lheidli T'enneh, one year after the Enbridge natural gas pipeline explosion forced members into a hasty evacuation.
Oct 9, 2019 4:08 PM By: Mark Nielsen 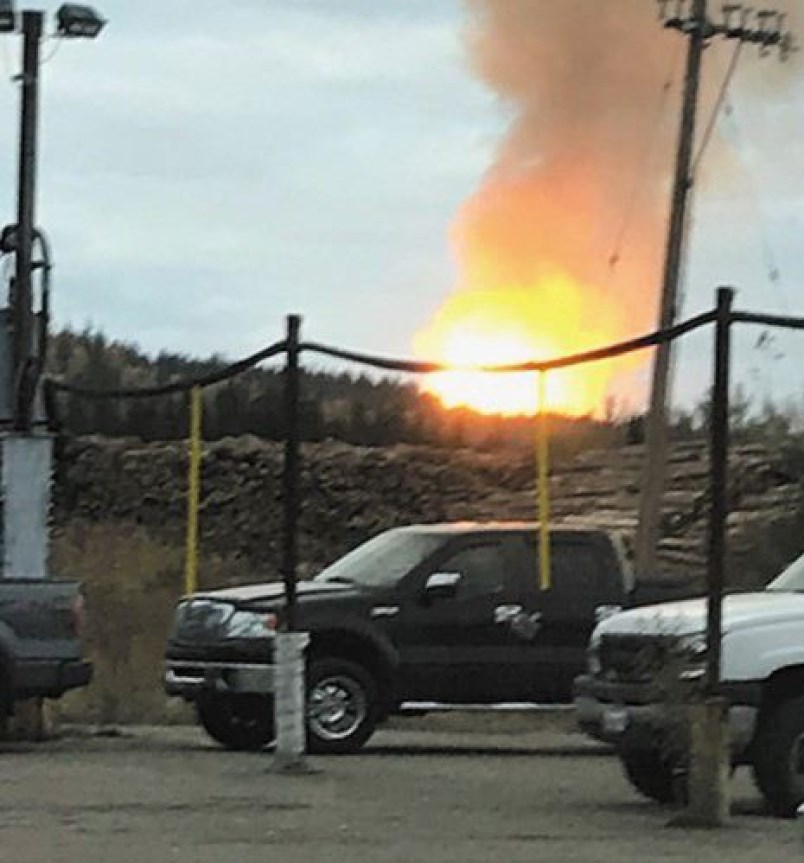 The fireball from the Enbridge pipeline explosion on Oct. 9, 2019.Submitted photo

Patience is wearing thin for the Lheidli T'enneh, one year after the Enbridge natural gas pipeline explosion forced members into a hasty evacuation.

In a statement, Malcolm McPherson, the lawyer representing the First Nation in a lawsuit against the company, said the community is "no closer to any resolution or answers post explosion."

The Oct. 9, 2018 blast kicked up a fireball seen for kilometres, produced ground vibrations strong enough to rattled windows in nearby homes and the LTFN Band Office over two kilometers away and covered them in ashes.

In the lawsuit, filed in February, LTFN claims Enbridge provided inadequate communications and emergency response. As well as damages, the band is seeking an injunction ordering Enbridge to dismantle and remove the pipeline from LTFN territory.

About 139 kilometres of the so-called Transmission South pipeline traverses LTFN territory and 1.5 kilometres runs through the southwestern corner of the LTFN's Fort George No. 2 Indian Reserve.

"The community remains deeply traumatized by the explosion, and for good reason," McPherson said. "Enbridge claims to operate world class pipelines and emergency response systems, but Lheidli T'enneh has seen no evidence of this claim to date.

"Further, Canada's Transportation Safety Board continues to fail to provide Lheidli T'enneh with assurances of safety and the integrity of the Enbridge pipeline system following the explosion."

In a statement, Enbridge officials said it has taken steps to "validate and improve the safety" of the system, including more frequent inspections and improved screening to evaluate and schedule maintenance work.

"While we have to wait for the Transportation Safety Board report, we are committed to fostering a strengthened relationship built on our shared priorities of safety, environmental protection and economic development.," officials added. "We have reached out to the LTFN to talk and remain open to sitting down and beginning a dialogue."

Transportation Safety Board communications director Rox-Anne D'Aoust said its investigation is ongoing but also noted Enbridge was issued a safety advisory in June after the agency found cracking in 37 metres of the pipe taken in for analysis.

It attributed the trouble to the polyethylene tape coating, saying it tends to separate from the pipe and allow moisture to contact the pipe and shield it from the cathodic protection current, an electromechanical system used to prevent corrosion.

About 500 kilometres of pipe in the Transmission South system is coated with the tape, based on company records, the TSB further states, and suggests the company review its management practices to ensure the risks are mitigated.

"Investigations are complex, and we take the time necessary to conduct a thorough investigation to advance transportation safety," D'Aoust said in an email. "Be assured that, if we uncover serious safety deficiencies during the course of our investigation, we will not wait until the final report to make them known."