It isn't uncommon for kids to look upon firefighters as heroes, but in Prince George on Tuesday, there was some reverse admiration happening at Fire Hall No. 1. Nathan McTaggart was in the city on a tour showing off his latest children's book.
Jul 9, 2019 9:08 PM By: Frank Peebles 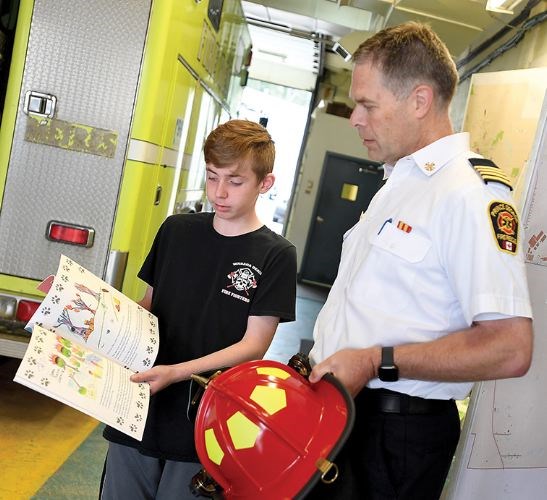 It isn't uncommon for kids to look upon firefighters as heroes, but in Prince George on Tuesday, there was some reverse admiration happening at Fire Hall No. 1.

Nathan McTaggart was in the city on a tour showing off his latest children's book. McTaggart is 13 years old and his fresh title Brandy & Her Super Hero is the third book he and his father Keven have written together. All of them focus on first responders and some fantastical adventures.

The McTaggart family lives in the Lower Mainland but the latest book is about a dog with agility skills who helps save a group of stranded fire fighters battling Cariboo wildfires. He stopped in places like Ashcroft, Cache Creek and Quesnel on his way to this most northerly spot on his junket, and he was headed to Williams Lake following his tours of Prince George fire halls. There he was scheduled to meet with T'exelcemc chief Willie Sellers who is also the author of children's books.

All of these places were deeply affected by recent wildfires, hence the young writer's interest in the personal knowledge.

"We had some crews go out," to aid forest fire suppression efforts in neighbouring communities, explained Marcel Profeit, the city's chief fire prevention officer, one of many at the fire department who spent time talking with McTaggart. Profeit also explained how Prince George hosted thousands of evacuees from the very area in which Brandy & Her Super Hero is based. "This book hits home for us."

There was a quiet stream of firefighters pulling bills out of their wallets to buy their own copies of the book, intending them for the kids in their own lives.

All the money raised from the three books he has written goes to various charities McTaggart has chosen.

Hall remarked that each book was also an opportunity to spread the safety message to young audiences, as each story has learning points built into the plot.

One of the fire department's chiefs, Kevin Scobie, swapped challenge coins - decorative coins presented to members of organizations like the military, police and firefighters - with McTaggart.

"It is certainly impressive at his age," said deputy chief Cliff Warner, after showing the boy around the fire hall and some of the trucks.

McTaggart was especially young when the seeds of this book series first sprouted. He was only three and a half.

"I was at a Food Bank Friday event in Coquitlam making a donation when a fire truck rolled in. I was in awe," he told The Citizen.

"I was being interviewed by a reporter about my donation, but when the fire truck arrived I just stopped and stared.

"The reporter wanted to know why I just stopped talking, and my parents explained it was because firefighters were my superheroes."

When his elementary school teacher asked each student to make a book for a class project, McTaggart's was on firefighters and he went far beyond the requirements his teacher set out for length and composition. It was that process that sparked the idea about doing a book.

His mother is an air force veteran and his father a carpenter and marketing entrepreneur, so the family dynamic was conducive to McTaggart's affinity for first responders and public safety, and feeling empowerment to spread his stories.

"It's a very good way to spend time with my dad. He helps me develop the stories," McTaggart said. "We think of things off the top of our heads. We talk about ideas that fit together. We run scenarios. We cut a lot of it out, I don't like that, because sometimes we want to add it back in later but it's gone. It forms into a book after awhile."

When McTaggart was wondering out loud what a firefighter would have to do if Santa got stuck in a chimney, his very first book was ignited.

Ironically, McTaggart admits that he isn't much of a reader.

He likes the Percy Jackson book series, but he prefers to be playing hockey or lacrosse or video games instead of reading.

Writing is another matter.

He has an active imagination and an animated curiosity. Every time he finishes a book he has ideas for a dozen more already mulling in his brain, and when he is out and about living life, bits of it will spark creative elements for his next story.

When he attended a Superdogs show, the inspiration for the Brandy story flashed in his mind.

McTaggart's books are published by TellWell Talent of Victoria.

They are available for sale online via Amazon or his www.nathanssuperheroes.com website.

"One of Nathan's favourite parts is, at the back of the books, there are five pages where the children can take the book to local fire halls and have their super heroes sign them," said Keven.

"Since we launched his first book, Santa & His Super Hero, two years ago, we have donated $2,500 to the BC Professional Fire Fighters Burn Fund and over $2,000 to other deserving charities."

The reception was so warm in Prince George, plans are already forming in the McTaggart family schedule to return for future visits.