Kyle Balzer
Oct 24, 2019 8:30 AM
Previous Next
1 / 1 Reid Perepeluk (#26) gets caught between several Kelowna Rockets in fighting for a loose puck at the CN Centre (via Prince George Cougars/Brett Cullen Photography)
Expand
Previous Next

For a fourth straight game, the Prince George Cougars were able to beat their opponents in terms of the number of pucks they got to the net.

However, they fell a third consecutive match in the stat that really counts.

Prince George ended their four-game homestand in a 4-2 double-down by the Kelowna Rockets despite outshooting their B.C. Division rivals 35-34.

The Cougars surrendered their first short-handed goal of the 2019-20 season, an opportunity taken by Liam Kindree with 4:23 to go in the second period, and it proved to be the ultimate winner by game’s end.

A struggling special teams core, on the other hand, stepped up in a positive way for the home side as both of P.G. goals came on a power-play and got them out of a two-goal hole. 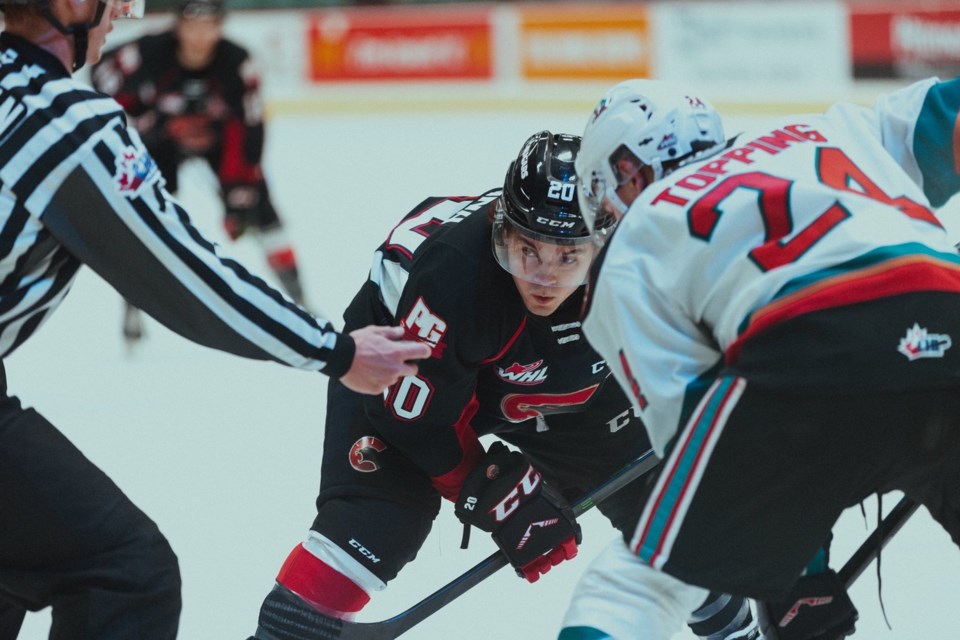 Iljiah Colina found his first tally of the year by batting a puck mid-air from behind the net and off the side of Kelowna netminder Roman Basran to cut the score to 2-1 with 55 seconds left in the opening period.

Defencemen Cole Moberg and Ryan Schoettler helped Colina get the monkey off his back.

The scoreboard was brought back to even-par thanks to Josh Maser’s team-leading sixth goal on a point-blank shot with one second to go in the man-advantage and 99 ticks into the middle frame.

Jack Sander and Ethan Samson were credited with the assists.

That’s all the Cougars could muster in an attempt to come back after the Rockets scored the short-hander later in the period.

Nolan Foote, son of Kelowna head coach and former NHL star Adam Foote, had himself a three-point night, providing assists on his team’s second and third goals and scored the insurance marker on a two-on-one with three minutes left in regulation.

Goaltender Taylor Gauthier stopped 30 of 34 shots in his 11th start of the Cougars’ first 12 games.

A total of 44 penalty minutes were handed out between both benches in what was also another physical B.C. Division battle.

Kelowna leads the nine-game season series against Prince George 2-1; all three meetings were on northern B.C. ice played in a 20-day span.

The setback drops the Cats’ record to 3-8-0-1 and remain in fifth place in their division.

Prince George won’t return home until Wednesday, Nov. 6 when they welcome the Medicine Hat Tigers to the CN Centre.

For now, they embark on a four-game road swing with two stops in B.C. and two in Washington state starting in Tri-City this Saturday (Oct. 26) and Vancouver on Sunday (Oct. 27).