iPads donated to pediatrics wing at hospital for patient use

The idle hours for kids in the pediatric wing of the University Hospital of Northern BC just got a little more entertaining.
Apr 28, 2015 7:44 AM By: Prince George Citizen Staff 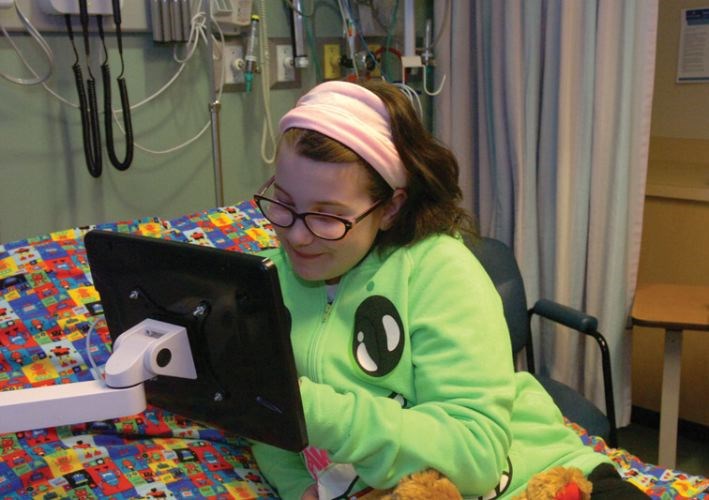 Gibcyn Norlander, a 10-year-old patient at UHNBC, plays on one of the hospital's new iPads Monday. UNBC Continuing Studies students raised $50,000 to purchase 16 iPads and holders for the pediatrics department.Citizen photo by Samantha Wright Allen

The idle hours for kids in the pediatric wing of the University Hospital of Northern BC just got a little more entertaining.

That's thanks to the donation of 16 iPads chock full of movies and games for all ages after a UNBC Continuing Studies class made it their goal.

Fiona MacPherson, who works in Northern Health's information technology department and is enrolled in a Masters Certificate in Project Management, pitched the need to her classmates.

"It's never a pleasant situation for kids to be in the hospital and this just makes the stay a little bit easier," said MacPherson at Monday's unveiling.

Theirs was the first class to pitch a real-life project and follow it to fruition. It meant raising about $50,000 to purchase iPads,16 medical-grade arms to hold them in place and the iTunes credits.

Sandra Wyatt, a child life specialist at the hospital, had been looking for a solution for almost three years.

"This was such a large project," said Wyatt. Money was always the issue, she said, but talking to Fiona they came up with the plan.

Wyatt has no doubt it'll make a difference in the quality of a patient's stay.

"They get bored," she said. "If you're stuck in a room and you're on isolation as nice as these rooms are, it is just one room and after a day or so, it gets a little climbing the walls."

Previously kids could chose from four television channels, but if they had an appointment, there was no way to pause the program.

"They're self sufficient," she said of the patients now that they have access to the devices. "It gives them some control over an uncontrollable situation."

It also saves staff on time. With the devices, they no longer need to spend any time on set-up.

"It's more interactive for (the patients) and so we're into the 21st century," said Wyatt with a laugh. "Kids today, everything's to do with gadgets."

Wyatt expects the iPads will be loaded and ready to go in the next couple weeks.

Course instructor Dale Christenson complimented the 18 students, who were tasked with planning and completing a project.