For the first time, Indigenous students in School District No. 57 (SD57) had the opportunity to attend a high school graduation ceremony that celebrates their journey and achievements in a cultural context.

Ts’udelhti – which means 'We Honour' in Dakelh Lheidli dialect – was held at Vanier Hall this morning (May 30).

Students from Prince George, McBride, Valemount, and Mackenzie made up the nearly 80 graduates from 33 Nations.

The ceremony began with a traditional welcome and opening remarks by Lheidli T’enneh Chief Clayton Pountney. 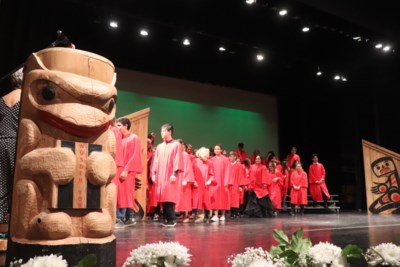 The procession of graduates as they leave the stage at Vanier Hall. (via Hanna Petersen)
“Other districts are doing it, and I just thought it was time,” said Potskin in a news release, who made reference to Aboriginal graduation initiatives at the University of Northern British Columbia (UNBC) and the College of New Caledonia (CNC).

Noelle Pepin, an Aboriginal Resource Teacher with the district, said Ts’udelhti is “one of the first steps” in honouring the cultural identity of Aboriginal graduates.

“Honouring our students’ cultural identity will make them stronger learners and feels like we’re moving towards reconciliation,” Pepin said in the release. “I think it’s a step in the right direction. We need to keep building it, and we’re picking up speed.”

Another significant part of the graduation ceremony was the inclusion of young learners from the Prince George Aboriginal Head Start Program, hosted by the Native Friendship Centre.

That’s a program designed to meet the spiritual, emotional, intellectual, and physical needs of Aboriginal preschool children who live in an urban setting.

“Our school district has been working with Prince George Native Friendship Centre on Kindergarten transitions for the last few years. Accordingly, we wanted to include and honour them in this ceremony,” said Lisa Provencher, who works in SD57’s Aboriginal Early Learning Program.

“We wanted to create intergenerational experiences. The Grade 12 students will honour and gift the Head Start students as a proverbial passing of the torch, saying, ‘We’re ending this particular journey and you’re starting.’”

Pepin noted that some of the 2019 graduates also attended the Aboriginal Head Start Program.

The hope, she said, is that the current Head Start learners take some inspiration from the graduates and follow their own paths to high school graduation.

“This group of Head Start children would graduate in 2032, and then they will take on the role of gifting and inspiring the next generation,” Provencher said.

Ts’udelhti included a cultural performance by Juno-nominated musician Marcel Gagnon, who was born in Prince George and is a member of the Lheidli T’enneh First Nation, and the Southridge Elementary School choir.

“We’re trying to strengthen connections between the students and their Nation and also their Indigenous identity,” added Pepin.

SD57 says Ts’udelhti ties in with the districts strategic plan in multiple ways as it increases a sense of belonging, cultural safety and identity for Indigenous students.

It also helps to increase Indigenous Ways of Knowing throughout the district to support learning for all students and staff.

This man is now the Interim Superintendent of Prince George’s school district
May 28, 2019 11:55 AM
Comments