Premier John Horgan did not inspire a standing ovation upon entry, nor did he illicit any booing. He did not speak with evangelical fervor, nor did he lose anyone's attention.
Jan 23, 2019 9:13 PM By: Frank Peebles 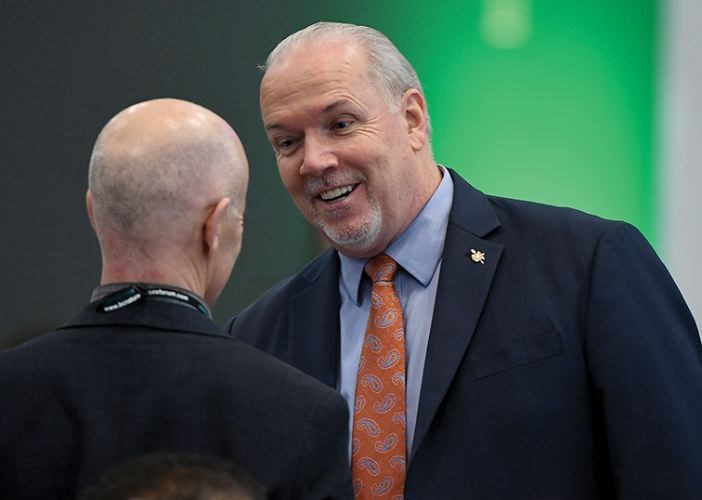 Premier John Horgan speaks with an attendee at the Northern Resource Forum on Wednesday.Brent Braaten, Photographer

Premier John Horgan did not inspire a standing ovation upon entry, nor did he illicit any booing. He did not speak with evangelical fervor, nor did he lose anyone's attention.

For this, his second consecutive year as a luncheon keynote speaker at the BC Natural Resource Forum, he and the crowd showed a casual comfort with one another.

His speech was calm, businesslike, funny at times and thought-provoking at others.

He took time to run the list of his government's challenges, and some of the key accomplishments in his view. It was an opportunity to throw the previous B.C. Liberal government under the bus to paint his NDP-Green coalition government in a campaign light, but he sidestepped such rhetoric.

Most of the challenges, he said, were outside of government control like record-breaking forest fires, harsh floods, and the bite of China and the United States in global affairs.

Horgan also noted that some of the things done by the current government might seem surprising to an industrialist/business crowd.

He was bullish on developing liquefied natural gas. After careful review, he supported Site C Dam construction which he described as a "very controversial but fundamental project."

He also stressed that two sub-topics of government were actually keystone enablers of natural resource development.

He said all the investment a government could make in the burgeoning tech sector was tantamount to investment in mining, forestry, oil and gas, agriculture and so forth because contrary to mental image, the tech sector did not mean making better video games, but rather making better tools for the natural resource sectors to use.

That might mean software, but it also might mean the 18-storey all-wood skyscraper now standing on the campus of UBC in Vancouver.

He complimented the industrialists of British Columbia for being longtime backers of the carbon tax, a system pioneered by B.C. in the North American context.

The carbon tax's effects were examined by the auditor general who determined it was pumping air into the tires of the B.C. economy at the same time as it offered its disincentive to pollute. While other provinces are openly warring over the cross-Canada implementation, B.C. is carrying on with business as usual.

He also referenced the impasse at a small bridge on a small river by a small segment of the Wet'suwet'en First Nation acting in opposition to a natural gas pipeline. This was a complex situation, Horgan outlined, that called on all sides working under the natural resources umbrella to be respectful of each other, for all sides have a degree of righteousness, and no side has overarching power.

"I'm hopeful that you'll all agree with me that no one wants British Columbia to have a black eye on the international stage, when it comes to reconciliation, because we in British Columbia, successive governments, have been working hard to try and get our heads around what is a complicated issue - an issue of profound human rights and also of economic liberation," he said, referencing the generational, systemic habit prior to recent days of natural resources and other economic development being unilaterally imposed on the traditional (and unsurrendered) territories of First Nations "for my benefit and your benefit but not their benefit."