Richard and Sharon Clements have written an open letter to Premier Horgan and health minister Adrian Dix, reaching out to address the issue of elective surgery being postponed with no schedule set for those currently in need.
Apr 10, 2021 6:45 AM By: Christine Hinzmann 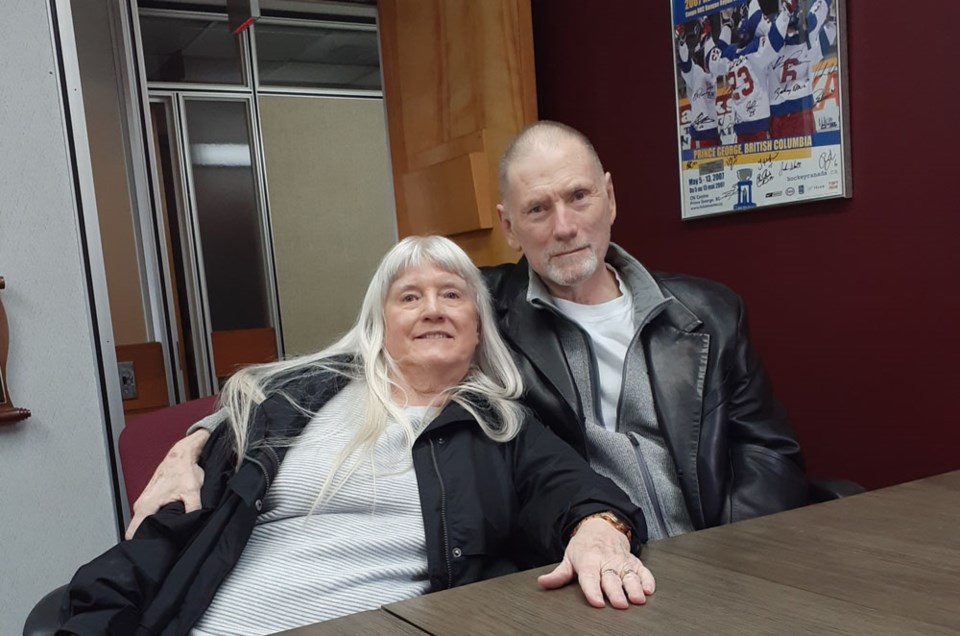 Sharon Clements needs a hip replacement and there's no date set for her much-needed surgery. Husband Richard finds the wait difficult to tolerate as he watches his beloved wife of 54 years suffer through the pain. Citizen staff photo

Richard and Sharon Clements have written an open letter to Premier Horgan and health minister Adrian Dix, reaching out to address the issue of elective surgery being postponed with no schedule set for those currently in need.

Sharon, 74, needs a new hip and suffers with the damaged one every day.

She is a retired registered nurse who worked at UHNBC for 25 years.

In November 2020, Sharon was placed on a waiting list and there's still no date scheduled for the surgery.

A hip replacement is considered an elective surgery, which means that if left untreated your ailment won't kill you.

But there's a lot to be said for quality of life. Sharon can only sleep for short periods of time because of the constant pain her deteriorated right hip causes.

Sharon can't walk without a walker, can't climb the stairs in her home, can't drive and can’t do the things she has always loved doing, like quadding, skiing, snowshoeing and canoeing.

Richard, Sharon’s husband for 54 years, feels helpless because there's nowhere to turn to get the surgery done and COVID is only one of the many barriers.

The Clements said they know their doctor is doing everything he can but the availability on the surgical schedule at University Hospital of Northern BC is the biggest issue and they know there are more people than just Sharon that are hurting because of it.

Sharon's pain and bone deterioration is caused by osteoarthritis and she had to have her right knee replaced in 2019. Recovery from that surgery was relatively easy for Sharon and she was back on her feet in a month.

"By the end of the summer we were back quadding again and we put the canoe in the water," Sharon said. "We were back doing all that kind of stuff."

Then about a year ago, she began experiencing pain in the muscles around the new knee and the doctor soon discovered the source of her pain was her hip. The damage to the hip was extensive and quickly deteriorated so the need to replace it was determined in November.

"It's just gotten worse since then," Sharon said. "It's the little things - it's just seems to lock up and all of a sudden I can't move. I would be clearing the jams off the table and I just couldn't move. Then I'd have to ask Rick to help me and now I just wouldn't do anything without him. I try to do as much as I can but I get tired. The pain is exhausting."

Sharon has a nap every afternoon to try to cope, she added.

To accommodate Sharon's love of gardening, Rick rearranged their dining room into a bedding plant nursery so that Sharon could care for her beloved plants without having to go down to the basement where she used to start her plants.

"Now we eat at a little bistro table for two that's off to the side of my dining room garden," Sharon said with a smile for her beloved husband.

When Rick wrote the letter to Horgan and Dix, he said he wanted to raise awareness about the slow-moving surgical schedule that sees his wife suffering needlessly.

"They're basically telling us we have no plan to help you," Rick said.

In a recent news release linked to the Northern Health Authority's website it was reported that after a backlog of surgeries were put on hold for most of 2020 that as of Feb. 4 health authorities had completed 95 per cent of those 15,373 surgeries.

“Through our surgical renewal commitment, we said we would get more patients their surgery faster, and we are doing exactly that,” Dix said in the March 19 release. “We said that within 15 to 22 months, we would catch up on both postponed surgeries and those that were not scheduled and, despite the second wave, we remain on target. When something as critical as surgical renewal is working so well, you don’t pause, you don’t let up, you go full steam ahead. And that is exactly what we are doing.”

But that is small comfort to Rick who sees what the wait is doing to Sharon.

"One can endure things when there's an end in sight - where there's some relief but there really isn't any," Rick said. "I just want to see Sharon get the kind of care that she should get."

By nature, Rick is a person that does a lot of research.

He started his career as a police officer in Toronto and then became a senior inspector and adjudicator for the Attorney General in BC and then ended his career in Prince George when he opened the provincial consumer affairs branch before he retired. So his career was always based in investigation.

Looking at options to get Sharon's hip replaced, Rick did some research into private clinics and there are no local options and travel is not recommended during the pandemic at this time. The risk presented by COVID-19 is also a very real threat to the couple but they are scheduled to get their vaccines on April 16.

"This situation keeps me awake some nights because I feel I'm not doing enough - there must be something I can do to help - and I'm frustrated," he said. "I don't have a history of turning the other cheek and I'm not about to start now. This is the person that means the most to me. There's got to be something that can be done for her. I hate to see her suffer like this."