'He knew her age, he knew she was a child' 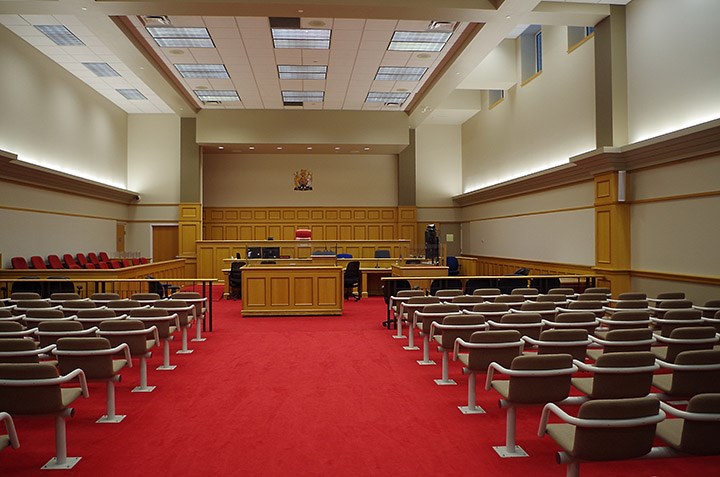 The interior of Courtroom 104 at the Prince George courthouse. John Deacon Q.C. courthouses.co

Crown prosecution is seeking 10 to 13 years in prison for an autistic man who sexually abused and took pornographic photos of a girl when she was only five-to-seven years old.

The lawyer for the man, in contrast, proposed a sentence of two years in prison, less a day – the maximum jail time that can be served in provincial custody – followed by three years probation.

Defence lawyer Matthew James called the Crown's proposed sentence "drastically disproportionate to the nature of the offence, and the nature of (the man)."

The man, who cannot be named under a court-ordered publication ban to protect the identity of the victim, was living in the home of a family member in Prince George, Crown prosecutor Lisa Sukkau told the court on Friday. The family trusted the man alone with their young daughter, who was a member of his extended family.

Over a period of years he took hundreds of images of her naked body, escalating to sexually touching her on the buttocks and eventually attempting to rape her, Sukkau said.

"(The man) abused his position of trust. (The offences) took place in her home, in her bedroom. The place where she is supposed to be safest," Sukkau said. "(He) tried to have sex with this young child – it just doesn't get worse than that."

The case is one of the first of its kind to come forward following a landmark April 2020 Supreme Court of Canada decision. In the case of R. vs. Justyn Kyle Napoleon Friesen, the Supreme Court ruled that jail sentences for sexual offences against children need to increase to reflect changes to federal law and "because society’s understanding of the gravity and harmfulness of these offences has deepened."

High single-digit and double-digit jail sentences "should be neither unusual nor reserved for rare or exceptional circumstances," the Supreme Court ruled.

"There is no case that is the same, thankfully," she said. "It's a dangerous path to not denounce and deter people from sexually abusing children."

While a psychological assessment ordered by the court found the man was on the autism spectrum, and has attention deficit hyperactivity disorder (ADHD), the report found his disability was not responsible for him committing the crime, Sukkau said. The man had previously lived independently, prior to moving in to the victim's home.

The assessment found he had little empathy, was very self-focused, and continued to deny and take no responsibility for his actions, she added.

In addition, he engaged in "grooming behaviour," telling his victim that what they were doing was normal, and warning her not to tell anyone, she told the court. He committed his crimes when the two were alone together.

"They were planned, they were deliberate," Sukkau said. "He knew her age, he knew she was a child. (He) never misunderstood that he shouldn't have sex with (the victim)."

The fact the victim was able to stay composed during her testimony should be a credit to her strength and resilience, not interpreted as a lack of harm, Sukkau said. Often it takes years for victims of sexual abuse to fully be able to articulate the harm they have suffered.

"No sentence will reverse the harm that (the man) has done to his victim," Sukkau said. "(But) it will do justice. (It will show) the reprehensible preying on children will never be tolerated."

James said the sentence has to take into account his client's mental disabilities.

"(He) has issues around cognition and with communication generally," James said. "As a result of his autism, he struggles with empathy and (understanding the) consequences of his actions. He struggles with social cues as an innate part of his disorder."

The man has a history of depression, and twice has been hospitalized because of suicidal thoughts, James said. James submitted letters of support to the court as evidence from the man's parents and a friend, saying the sexual abuse was completely out of character for him.

His family said the man has the mental capacity and maturity of someone in their early teens, James said.

The man has no previous criminal history, and has complied with his bail conditions for the past three years, James added.

The man has been seeing a councillor for more than a month, and with COVID-19 its unlikely he'll be able to continue treatment in prison, James said. As a sexual offender and a person with autism and other mental disabilities, the man is likely to find prison especially difficult, he added.

"He has a lot of work to do, and he acknowledges that," he said. "(But he) is in physical danger in prison. He's in danger of suicide. Two years less a day, with the difficulty he will have in custody, is ample. The idea of 10 to 13 years is grossly disproportionate."

Sending the man to prison for 10 to 13 years would set a dangerous precedent for future cases, following the Supreme Court's ruling, James said.

"We are reformulating what is appropriate, post Friesen (ruling)," he said. "I would say we do not want to put (the man) or people like him at a starting point of seven years. It is not the precedent we need to be setting."

James said thankfully the victim's parents haven't reported any change in behaviour in the victim.

"Harm is often very hard to determine in these cases, I concede that," James said. "(But)the level of documented, actual harm is very low. Hopefully the victim will not suffer long-term harm."

B.C. Supreme Court Justice Sheri Ann Donegan is expected to release her sentencing ruling in the case at a later date.