Gouchie grateful for lessons in Nashville

Kym Gouchie is a singer-songwriter any aspiring musician would be wise to learn from. One of the reasons she is so acclaimed for her work is the spirit of aspiration she keeps alive in herself.
Nov 27, 2018 10:36 PM By: Frank Peebles 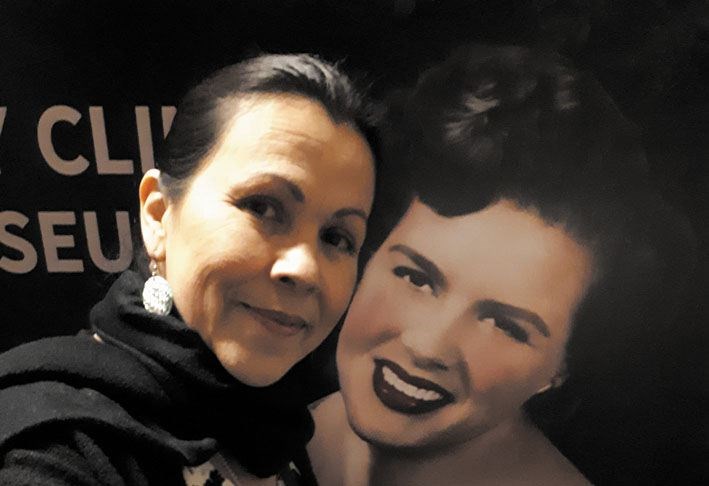 Kym Gouchie took this selfie of herself in Nashville at the Patsy Cline Museum.

Kym Gouchie is a singer-songwriter any aspiring musician would be wise to learn from. One of the reasons she is so acclaimed for her work is the spirit of aspiration she keeps alive in herself. She strives to be better at her craft and she flew right to the top of the songwriter mountain for her next lessons. She journeyed to Nashville where she spent 10 days working with BC Entertainment Hall Of Fame member Linda McRae on how to write a better tune.

McRae was a member of the Canadian Celtic act Spirit Of The West; she has been called in to collaborate by such luminaries as Bruce Cockburn, Neko Case and Paul Hyde; her songs have been covered by acts like The Skydiggers and lauded by ultra-producers like Colin Linden; she was one of The Primary Colours, a limited duration trio act with fellow stars Kim Ritchie and Doug Cox; one, and she has a loaded magazine of solo albums.

McRae has worked as a mentor with many other songwriters, and recently even in Folsom Prison like another singing outlaw you've probably heard of. What she's not done before is 10 days of in-house one-on-one work like she did with Gouchie, where the learning happened almost constantly. Some of it was guitar playing, some of it was lyric structure, some of it was storytelling, some of it was physical technique, and Gouchie drank it all in like a fountain in the desert.

"Linda said she could see my mental light bulbs going off, because yes, I did have a lot of moments of realization," Gouchie said. "Song structure, rhyming schemes, patterns to follow, how to listen to and gather in other people's music especially the lyrics, which is something I've never really done before. I get into the groove of the music, that's what I go with, but where the rhymes are, where the story lives, that's what's been new for me. I've only ever done that before intuitively, not in control of it."

Gouchie was able to spend this time mastering her craft thanks to a grant from the Canada Council For The Arts. Gouchie was a viable candidate due to her own substantial body of work, like the song Sister Rain that hit No. 1 on the Canadian Aboriginal Music Charts, her developing stage play entitled Her Blood Runs Through My Braids, the music she's composed using her native Dakelh language, and years of touring and performing her original recordings.

For any artist, especially one like Gouchie who grew up in a musical family steeped in golden-age country, Nashville is a Mecca.

"I'm just blown away by the amount of live music in this city. It's like it comes out of every crack and corner. When you drive down Broadway, its one building to the next, the sounds bleeding into each other, but they are all so distinct."

Her brother has been to Music City before. Mike Gouchie was an aspiring country star with his own momentum. Buddy Gouchie had a renowned stage command. Both have taken time off from actively pursuing this rare kind of career, but their sister couldn't help dreaming on their behalf as she meandered around this capital city of western music.

It was a lot of work, focused on how to make better art, but it was also a lot of inspiration by visiting famed locations like the Grand Ole Opry, the Ryman Auditorium, Robert's Western World, Tootsies Orchid Lounge, the Bluebird Cafe, the Country Music Hall of Fame and her personal pilgrimage to the Patsy Cline Museum.

"It was pouring rain and there was no one there but me for two hours so I got a private tour and it felt like I'd walked in out of the rain into her house," she said. "Patsy Cline was the first artist that really grabbed my attention and through whom I started to notice song lyrics and notice stories in song. When I first started playing songs, I would perform her music. To be there to feel the sadness and tragedy over how soon she was taken, but how she is still alive today through her music, it was very powerful. All over Nashville you can feel those early stars still alive in memory."

She attended the Country Music Association Awards, which coincidentally took place during her visit, an event she called "sensory overload" and a perfect cap to the grassroots Nashville blitz she'd been engaged in.

She even got some of her own stage time.

"I hadn't been here 24 hours and I was already on a stage singing," she said, after a visit to Papa Turney's, a live music barbecue house where the headliner that night was Daryl Wayne Dasher. Gouchie noticed his tattoos, styled on West Coast native art. She talked with him about that and before long, he had her up joining the band.

It was one of the few flashes of Aboriginal context she encountered on the trip. She was enthralled with Nashville and easily immersed in the music and its history, but she was aware that Canada is more attuned to the Indigenous component of definitive Western culture as we know it today.

"I've never felt like such a minority in my life," she said, as a matter of fact. She noticed a population of African Americans, but only encountered one other visibly Aboriginal American, an Apache server at a club she attended after the country music awards show.

"I was just so happy because I hadn't seen anybody until then," Gouchie said. "She completely made my day, to know she was there, she was visible, and had such beautiful confidence and personal energy and so proud."

Gouchie will be proudly turning her new creative knowledge towards her play and some new music she is working towards.

"Rae Spoon has done so much for me, and Rae is the one who wrote the grant proposal that got me this opportunity with Linda. I have fallen into the most amazing hands," Gouchie said.