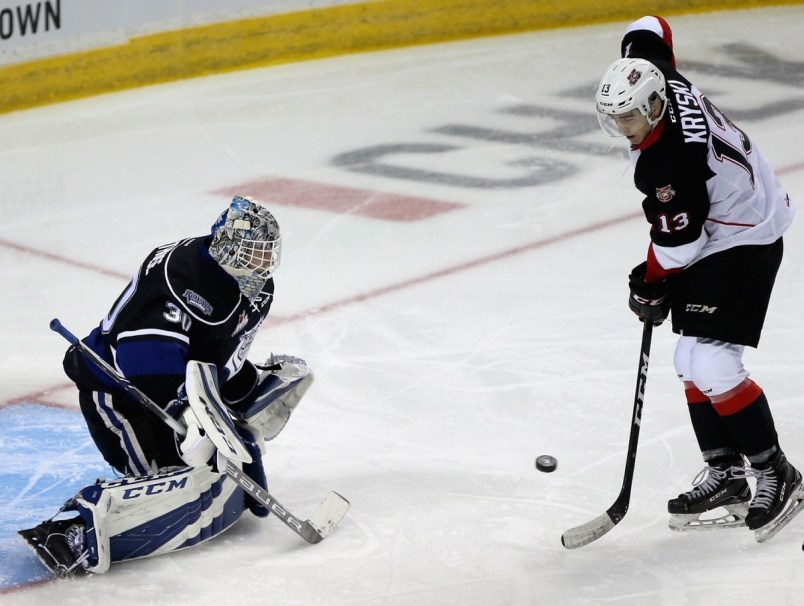 It is widely thought that larcenous goaltenders Griffen Outhouse and Taylor Gauthier need to steal their share of games for the Victoria Royals and Prince George Cougars, respectively, to have a chance this season in the Western Hockey League.

It played to form. Canada U-18 goaltender Gauthier and 20-year-old veteran Outhouse were stellar as the Royals defeated the Cougars 2-1, on a goal by Dino Kambeitz in the fifth round of the shootout, in their season-opening game Friday night before 5,867 fans at Save-on-Foods Memorial Centre.

The opener was scoreless through two periods before Prince George took advantage of a Victoria giveaway at the Cougars blue line to score two-on-one on Outhouse at 4:49 of the third period as Josh Maser nicely deflected home a pass by Vladislav Mikhalchuk.

The Royals finally solved Gauthier at 18:53 of the third as Brandon Cutler snapped home a Mitchell Prowse rebound to send the game into what turned out to be a scoreless overtime session thanks to Outhouse and Gauthier.

Get used to tight games this season in the B.C. Division, which features a trio of outstanding netminders.

“Taylor Gauthier won the gold medal with Canada at the U-18 [Hlinka Gretzky Cup] and has all the tools to be a high-end goaltender and looks to have an excellent future,” said Cougars GM and former NHLer Mark Lamb.

“Outhouse has the experience and can win a game all by himself, and the same with David Tendeck [the Vancouver Giants goaltender and Arizona Coyotes draft pick].”

Royals blue-liner and third-round Canadiens selection Scott Walford is still in Montreal camp, while Cougars forward Jackson Leppard has been returned from the Tampa Bay Lightning camp and was in the lineup Friday. So was 20-year-old Victoria forward Dante Hannoun, who returned from a personal family leave, and with Outhouse received the loudest ovations during the pre-game introductions

The Royals close out their set against the Cougars tonight at the Memorial Centre before hosting the Kamloops Blazers in another B.C. Division double dip next Friday and Saturday nights.

“There is parity in this division, with Vancouver the team with some high-end talent,” said Lamb.