Friends, family come to aid of ranch owners in wake of fire

As he entered the burning building trying to save the horses, Tom Ryan quickly lost his bearings when he bumped into the John Deere Gator blocking his path.
Apr 20, 2021 6:04 AM By: Christine Hinzmann 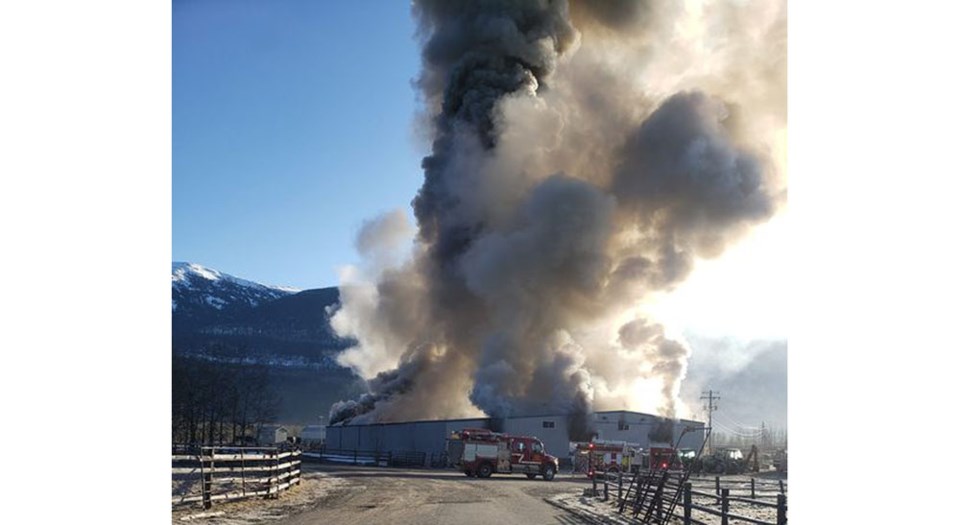 Shelly and Tom Ryan are dealing with the devastation caused by a fire at their ranch on April 12.

As he entered the burning building trying to save the horses, Tom Ryan quickly lost his bearings when he bumped into the John Deere Gator blocking his path.

The Gator wasn't supposed to be there but Tom's wife Shelly is very happy it was because she's sure between that barrier and the wind blowing the smoke clear just long enough for light to shine through a familiar window, Tom was able to find his way out before going in again.

It was too late for Tom to save the horses but he did manage to save one puppy on the second trip into the fire.

The McBride Ranch lost six horses, a dog, a puppy, a cat and 20 chickens when their horse barn/arena burned April 12.

It was Shelly's birthday.

"Tom ended up in the hospital for three hours cleaning out his lungs from all the stuff he inhaled," Shelley said. "Hours later when the fire was out we went into the barn to take a look and we see the Gator sitting there and it's burnt to a crisp and we thought let's take it out because the tires are still intact and see if it starts. It started. We're using it to clear the debris from the barn. We feel it saved Tom by getting in his way and it's still alive so it's kind of amazing."

The horse lovers, who are breeders and trainers, also lost their 42 foot motorhome, another family member's holiday trailer along with all their tack and other tools of a working ranch.

"We are so emotional over this loss," Shelly said. "We figured we got past the crying stage but just a text or looking at a photo will set us off again."

They have no idea what started the fire. What woke them was a vehicle honking its horn in their driveway to alert them to the trouble during the early morning hours.

Since the fire, there have been many woulda shoulda couldas going through the couple's mind, Shelly said.

"We can't help but think like that but you can't do that but you're human so you do," Shelly said.

They were going to get their motorhome out of storage the day before but decided to wait because it had snowed. They're kicking themselves now because they didn't move it.

Back in the early days when they first bought the land in 2004 and started to build, insurance was about $1,500 a year. As time went by it soared to about as much as $15,000 a year and they just didn't have the extra $1,000 plus a month to manage it. They had no storage insurance because they thought everything was safe in the barn. The loss is a big hit.

Everything inside was burned.

Four of the beautiful horses they lost in the fire were the Lusitano breed worth about $50,000 each. They also lost a mare that was bred and a horse that Tom had trained that was to be sold during a clinic next week.

Luckily their stallion and another Lusitano were outside at the time of the fire and are alive and well and among the 18 horses that remain on the ranch.

"We've still got my mare and the stallion so they can still make more babies so that's something," Shelly said. "We have to focus on the positives, right?"

The loss of those lives has left them reeling.

"The barn is a big structure but everything inside is gone and we are picking up the pieces," Shelly said with great emotion. "Without all the help and support Tom and I would never be able to do this so we're just going to do what we can and hopefully we can get some things so we can have a new normal because we ride and train horses and do clinics. And we just thought what do we do now? Where do we go?"

The horse people of McBride have rallied around the family donating what they can, Shelly added.

"We're going to have more tack than we need, " Shelly said. "So there is some happiness in this."

Family, friends and neighbours have gathered to help clean up.

"We're so grateful to everyone who has helped us," Shelly said. "We're staying strong together. We'll get though this."

The call is out for donations to start rebuilding what they can.