The Lheidli T'enneh First Nation and the McLeod Lake Indian Band have formed a partnership to develop an industrial park near Summit Lake.
Jun 23, 2020 11:30 AM By: Mark Nielsen 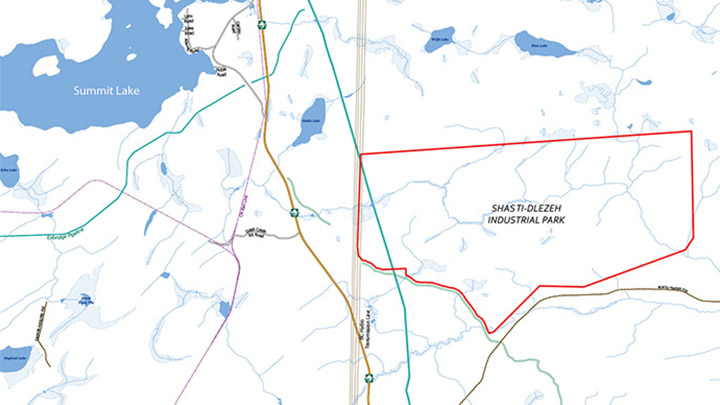 A map showing the location of the Shas Ti-Dlezeh Industrial Park.Handout image

The Lheidli T'enneh First Nation and the McLeod Lake Indian Band have formed a partnership to develop an industrial park near Summit Lake.

They have their eyes on close to 400 hectares (1,000 acres) of Crown land on the east side of Highway 97 North and about four kilometres southwest of the community about 50 kilometres north of Prince George.

"Our two communities have a history of being trading partners and it only makes sense that we work together with LTN and jointly pursue this new business opportunity," McLeod Lake Indian Band Chief Harley Chingee said.

"Not only will development of Shas Ti-Dlezeh Industrial Park benefit our communities and other First Nations but it will also provide long term benefits to both the economies of Prince George and Mackenzie."

Lheidli T'enneh Chief Dayi Clay Pountney said the venture "provides greater assurance that projects proposed for location in the Shas Ti-Dlezeh Industrial Park will meet our environmental standards, as well as maximize economic benefits to our communities and the region."

A proposed $5.6 billion petrochemical complex could become its first tenant. West Coast Olefins president and CEO Ken James said he will be meeting with representatives on Tuesday.

"It's certainly one of the options we're looking at," he said. "A little early to comment."

One other spot near Summit Lake and two spots near Bear Lake are also being considered, James has said.

The company had initially planned to build the complex at a 300-acre site in the BCR Industrial Site, but after public concerns about air quality were raised the company announced earlier this month it will look locate north of the city instead.

The sites are close to the Enbridge West Coast natural gas pipeline that will provide the feedstock for the plants.

Management consultant Terry Kuzma, who has been working with the MLIB said the next step will be a "government-to-government" negotiation over jurisdiction, land title and rights. He said the province's environmental review processes would still apply to any heavy industrial proposal for the site.

Kuzma said the site's northwest corner is about 2 1/2 kilometres south of Summit Lake's southern tip, "so significant distance as the crow flies, so to speak."

And thanks to the topography and area forest, "you won't be able to see it from the community or the southern portion of the lake."

He said the prevailing winds are from the west, and according to a preliminary review he's conducted, discharges from the West Coast Olefins proposal would remain well within provincial standards.

"But what I would take comfort on if I had a residence in Summit is knowing the westerly winds are going to blow everything east towards the Rockies and there is no residence or community downwind from the proposed industrial park so I think that's good news," Kuzma said.

Editor's note: This story was updated June 23 after the Citizen received confirmation that the site in question is currently Crown land.