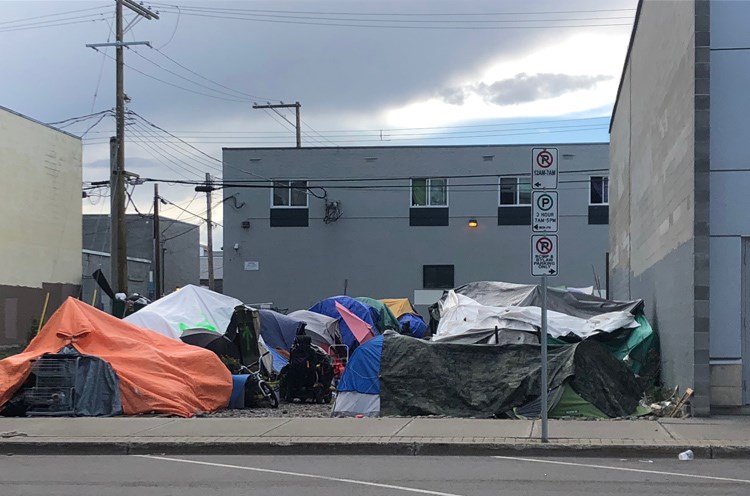 The City of Prince George intends to serve notice of trespass to people camping on vacant lot on George Street, across from the court house, on Friday morning. The city will be seeking a civil injunction to remove unauthorized encampments, the city announced on Thursday evening.Citizen photo by Arthur Williams

The First Nations Leadership Council (FNLC) is calling on the City of Prince George to stop evicting residents of a tent city until a workable plan to address homelessness is in place.

FNLC is asking the city to instead collaborate with First Nations organizations and other service providers.

On June 10, the city announced it will be seeking a civil injunction to remove unlawful encampments downtown, including the one on George Street across from the court house. The next day the city severed notice of trespass to the residents of the encampment.

FNLC says while the city has plans to build supportive housing, in the interim, it has directed resources toward criminalizing the homeless population through a heavy-handed bylaw approach.

A proposed bylaw going before city council tonight (June 14) would authorize bylaw officers to ticket people for a wide range of offences including panhandling, open drug use and camping in public areas.

“The homelessness crisis in Canada is complex, multifaceted, and cannot be addressed with these kinds of blunt and short-sighted approaches,” said Regional Chief Terry Teegee of the BC Assembly of First Nations

“City Hall’s approach continually re-traumatizes these vulnerable people, many of whom are suffering from the intergenerational impacts of residential schools. The City of Prince George has a long-term plan to house people experiencing homelessness, but they need to work with First Nations and other service organizations in the meantime to ensure humane treatment of these vulnerable people.”

FNLC says the current encampment is close to services used by the homeless population and the city should provide alternative space for the encampment and work with First Nations organizations to support the encampment’s residents.

“We demand the City’s eviction notice be rescinded until such time as they have a way forward that treats those impacted with dignity and respect,” said Grand Chief Stewart Phillip of the Union of BC Indian Chiefs.

“Our unhoused Indigenous relatives are disproportionately impacted and targeted by these ongoing actions to displace from our own lands. While governments respond with inaction, local First Nations organizations have developed a proposed plan to provide services to those living in the encampment. The city needs to provide the space, and the Province and Federal Government need to provide the resources for services. Anything less is can only be described as criminalizing poverty, and upholding the racist and colonial values this province continues to deny.”

Under the proposed Safe Streets Bylaw set to go before council, bylaw officers could issue $100 tickets, with a $75 penalty for late payment, for a variety of "nuisance" behaviours. In addition, city council is being asked to approve an amendment to the Parks and Open Spaces Bylaw to allow homeless people to temporarily camp in designated areas, but only when shelters in the city are full.

Currently the city's bylaws allow bylaw staff to remove people from parks and open spaces if they are camping, starting fires, littering or using alcohol. Bylaw officers also have the authority to move people and their possessions if they are blocking roads or sidewalks.

“This is a clear reflection of the low-income housing and shelter crisis in Prince George. Further marginalizing and stripping the dignity of those who have little choice but to seek shelter in tents, will only make this issue worse,” said Cheryl Casimer of the First Nations Summit Political Executive.

“While tents may not be an ideal option, it is the only option many of these people have. The City of Prince George must work with the provincial government and other partners to find immediate solutions that will address the lack of affordable housing and shelter for disadvantaged citizens.”

FNLC is comprised of the BC Assembly of First Nations, First Nations Summit and the Union of BC Indian Chiefs. The organizations work together to develop coordinated approaches to issues relevant to First Nations communities throughout the province.

Together We Stand, a Facebook Group of citizens concerned for the wellbeing of unhoused persons in the city, is also organizing a camp out tonight at city hall in opposition to the injunction and proposed bylaw.

The group will be assembling on the city hall steps to view a webcast of the council meeting which begins at 6 p.m.

All hands on deck needed to address homelessness in Prince George
Jun 8, 2021 5:52 AM

Opinion: Evicting the homeless in Prince George is modern colonialism
Jun 11, 2021 4:58 AM
Comments