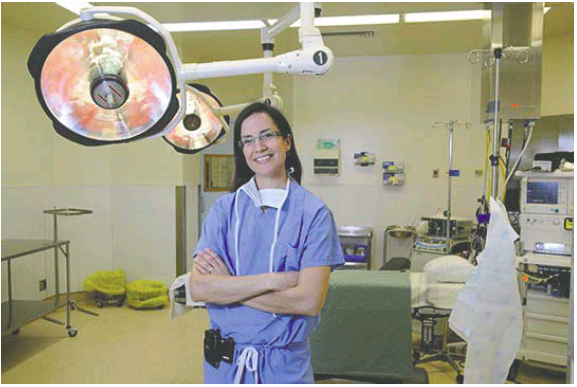 UHNBC surgeon Dr. Nadine Caron has been appointed the First Nations Health Authority chain in cancer and wellness.Photo from Simon and Schuster Canada

When it comes to firsts, Nadine Caron has made a career out of getting to the head of the line.

The 49-year-old Prince George doctor was the first female of First Nations descent to graduate UBC’s medical program and she used that knowledge to go on to become Canada’s first female indigenous general surgeon.

Now Caron has another first to add to her resume. She’s been appointed the First Nations Health Authority’s founding chair in cancer and wellness.

In her new role she will consult with indigenous cancer patients, survivors and their families to try to improve medical outcomes and gain a better understanding of how the medical system responds to their needs. Caron, co-director of UBC’s Centre for Excellence in Indigenous Health, aims to determine if traditional cancer treatments work as well for First Nations people as they do for other British Columbians.

During her five-year term she will try to find ways to combine established hospital treatments with traditional healing practices to better the health and wellness of cancer patients. She will share her insights with her teaching colleagues, students and medical staff and provide training and mentorship to strengthen provincial and national partnerships to improve indigenous health.

“It will take time to have the impact that our partnership aims to achieve along the entire cancer prevention and care spectrum — to better understand where we are and change these outcomes,” said Caron, on the UBC Faculty of Medicine website.

“Now we can say our responsibility starts here; the impact starts now. With all of us working together to bring Indigenous voices and perspectives forward, our tomorrow looks promising.”

The federal-funded First Nations Health Authority will provide $1.5 million for Caron’s department and that budget will be matched by UBC.

Caron headed a study two years ago which found First Nations residents of B.C. are less likely than non-indigenous people to survive a cancer diagnosis for almost all types of the disease and that indigenous people are significantly more at risk of developing colorectal and cervical cancer.

Caron is an associate professor at UBC who teaches surgery in the Northern Medical Program at UNBC. In 2016, she established the Northern Biobank on the UNBC campus, a storage facility for human tissue donated by patients for research purposes.

Caron’s mother is of Ojibwe descent from the Sagamok Anishinaabe First Nation in Ontario on the north shore of Lake Huron, where she attended a residential school and was the first graduate of her school before she became a teacher. Caron’s father is an Italian immigrant who became a mason and together they raised Nadine and her three brothers in Kamloops.

A graduate of Westsyde Secondary School in Kamloops, where she was a star athlete for the Whundas basketball team, Caron was recruited to Simon Fraser University in Burnaby in 1988. She continued her athletic career as one of the top players on the SFU Clan basketball team until 1993, when she graduated with a degree in kinesiology. After finishing medical school at UBC in 1997 she began her surgical residency and earned a Masters of Public Health degree from Harvard University. After completing her residency in 2003 she moved to San Francisco where she completed postgraduate fellowship training in endocrine surgical oncology.

Caron continues to serve rural patients as a surgical specialist at UHNBC, where she’s worked since January 2005. Her husband, Pat Turner, is an emergency room doctor at UHNBC.