Prince George firefighters spent early Tuesday morning battling a blaze on a Hart property that city council had ordered cleaned up last month. The back of the boarded-up and rundown mobile home at 7003 Adam Dr.
Apr 13, 2021 3:21 AM By: Citizen Staff 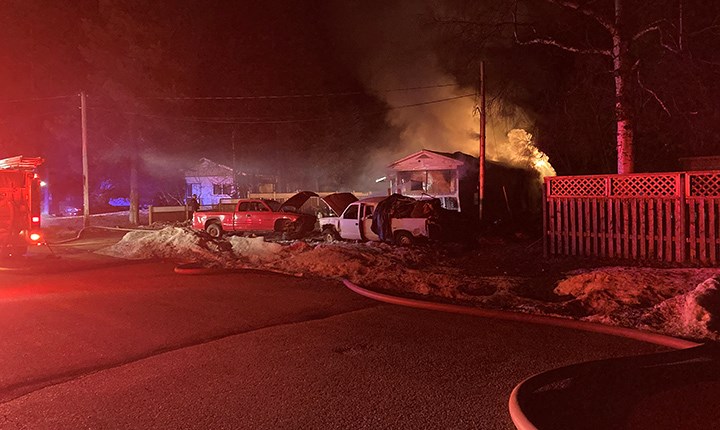 Police officers and firefighters were on the scene of a blaze at a rundown and boarded-up home at 7003 Adam Dr. in the Hart early Tuesday morning.

The back of the boarded-up and rundown mobile home at 7003 Adam Dr. was engulfed in flames as firefighters doused the home with water. The sound of chainsaws and other equipment being used filled the air along with acrid smoke at about 2:30 a.m., as area residents looked on.

Neighbours reported to RCMP seeing a male with a silver car on the property late Monday afternoon.

Since August 2020, the RCMP had been called to the property 45 times or roughly once a week, city director of community services and public safety Adam Davey wrote in a report to city council. The complaints ranged from noise complaints to drug activity and dangerous dog complaints.

In addition to the RCMP calls to the house, bylaw officers were on the scene at least 17 times since May 2020. And since August 2020, firefighters were there five times – four times to respond to drug overdoses and once because the residents were burning copper wire in the yard.

On Feb. 4, the RCMP informed bylaw officers the home was abandoned and left unsecured. Bylaw officers issued an order to board the property up, but despite at least six attempts to contact the owner, he has never responded to the city.

In March, city council had ordered the property owner to demolish the damaged mobile home and clear away the derelict vehicles, discarded household appliances, tarps and other trash littering the yard. The owner was given until April 30 to complete the clean up, or the city will do the work and bill the owner to recover the costs.

"This is one of the worst properties I've seen, and I have seen a lot of bad properties in my career," Charlotte Peters, the city's new manager of bylaw services and a former RCMP sergeant in the city, told city council in Marhc. "Having this property abandoned is a good opportunity to remediate this property, because we don't have to evict anybody."

Peters said that the property was a "flophouse" or "crackhouse," and bylaw officers suspected that at some points people were living in a pair of derelict campers on the site, two of 17 derelict vehicles on the property. The RCMP identified several of the residents as frequent offenders in the city, she said.

City crews boarded up the mobile home but the problems had continued.

Peters said she interviewed a longtime neighbour, and that person said that people, vehicles and trailers continue to come and go from the property at all hours of the day.