Elves for Elders brightens the holidays for Prince George seniors

The holidays can be a hard and lonely time for seniors.

One Prince George Group known as Elves for Elders is working to make the season a little brighter for seniors throughout the community. 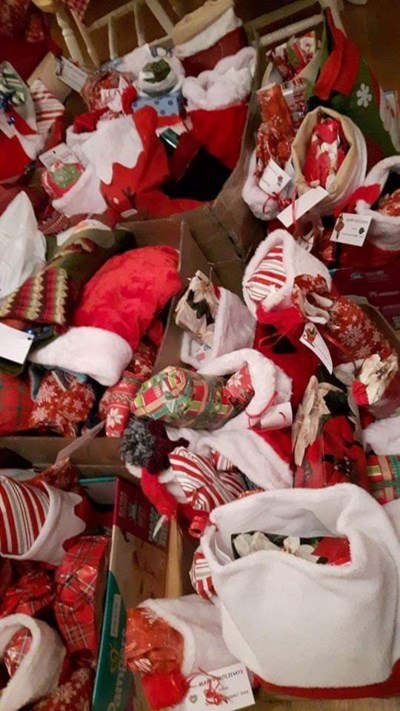 Gifts collected for Elves for Elders. (via Kari Gaddy)
“We try to aim for anybody who is alone for the holidays,” says Kari Gaddy, who started the group in 2016. “At least, maybe, we can alleviate some of that headache and worry during the holiday season.”

Elves for Elders works with various seniors’ organizations throughout the city to identify seniors who are in need of some Christmas cheer to act as a secret Santa and fulfill their wish lists.

They also run an Elves for Elders Stocking Program, where they distribute full stockings to local seniors' homes and agencies.

“The stockings go over quite well. We fill them to the brim and they are filled with a variety of toiletries and everyday essentials and maybe a deck of cards or toques,” says Gaddy.

Elves for Elders, which is now in its third year, was born out of a conversation on the Facebook group Questions and Answers of PG.

Gaddy was inspired by a London Drugs initiative in Alberta aimed at helping seniors during the holiday season.

Seniors could fill out a tag with something they wanted and pin it to a Christmas tree. Customers could then purchase that item and place it beneath the tree (this was before a similar initiative had started at the London Drugs in Prince George).

So she turned to the Facebook group to see what could be done for seniors in Prince George. Before she knew it, she had been nominated to run the group, which became known as Elves for Elders.

With only three weeks of organizing, Elves for Elders was able to assist 147 seniors in its first year. Thirty-six Secret Santa wish lists were fulfilled.

“Last year, we did 274 seniors with 86 secret Santas, and this year, it’s going to be even bigger. We continue to grow every year,” says Gaddy.

She says the success of the program is because of the many donors and volunteers.

“We couldn’t ask for better people, more giving people, or more thoughtful people. A lot of the donors have been with me since the pilot launch in 2016,” Gaddy tells PrinceGeorgeMatters, adding that one donor dropped off more than 100 toques she had knitted throughout the year.

Gaddy says it’s the memory of her mom and dad that keeps her motivated to give back each year.

“Since doing this, it’s even more of an eye-opener and it’s very sad what our seniors have to go through, especially as they get older and have mobility issues."

She says even though she doesn’t get to meet all of the seniors when dropping off gifts, she is often moved to tears by their responses.

“The first year I was in tears a lot because they are in tears and it was very emotional. Last year I was a bit stronger but I was still in tears,” says Gaddy.

“They are just happy to know that someone is thinking of them; so many are alone and they are happy to have a little bit of recognition.”

Elves for Elders will be filling their stockings on Dec. 16, but Gaddy says they will always welcome more donations, as there are a lot of seniors in need.

To get involved with Elves for Elders, or to find out how, what, where and when to donate, you can send a message to the Facebook group.