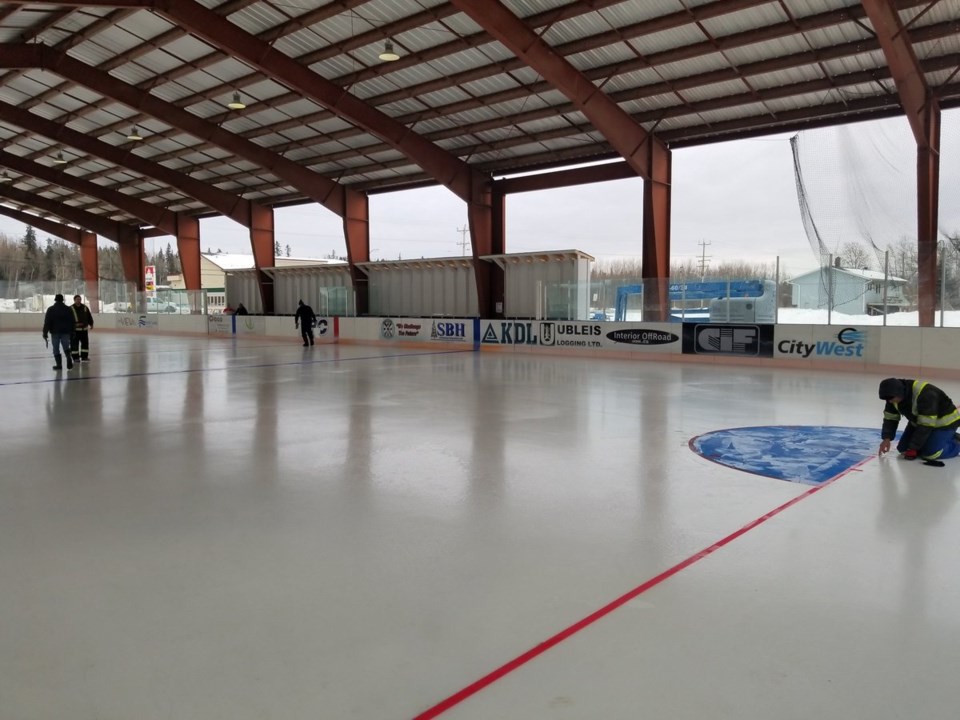 The Cariboo Cougars are going back to hockey’s roots this Sunday.

The Winter Classic-style contest is pitting the host Cougars, who are based in Prince George, against the Vancouver Northeast Chiefs, and General Manager Trevor Sprague tells PrinceGeorgeMatters he’s been working long days with local rink-rats to get the ice in shape.

“We had a great crew here from the District of Fort St. James and the Nak’azdli Territory; they’ve just been have been outstanding,” he explained.

“Starting back on Monday, we put a lot of ice down with heated water, and then on Tuesday, we pulled a 42-hour shift in building the ice. We’ve now gotten to painting the surface, dumping more ice, and getting the zamboni with more heated water out there to crisp it up for practice ahead of the game.”

We are done for the night rink is in great shape and waiting for lines in the morning. Thank for everyone ones help on making this game happen ! Up for 42 hour so now it’s time for Bed . @NakazdliWhuten @cariboocougars @NEChiefs_MML @BCHockey_MML #DefendTheNorth #WinterClassic pic.twitter.com/Gd0MjHnNe8

The event was made official last November and is also situated on the Nak’azdli Whut’en Territory.

In conjunction with the Sunday game, the BCMML is also running camps with minor hockey associations in Fort St. James, Burns Lakes, and with three Indigenous bands.

While hockey is the main reason for the Cariboo Cougars visit out west, Sprague said good sportsmanship is also what his team wants to exemplify.

“It’s about developing the youth in these communities. They’re excited about the game and practicing with our coaching staff and leadership group, but we’re also reaching out to the schools. School is very important; there’s always hockey, but school has got to be number one in their lives at their age. So I hope we really inspire youth in the north to continue to play hockey, the game we love to play here in Canada, and build the sport within the other rural communities of Northern BC.”

Forecasted weather conditions are calling for 0 C around the 2 p.m. puck drop with winds blowing in from the southwest, but that’s not a concern for Sprague.

“The rink, luckily, is covered. I think it’s going to be perfect weather for outdoor-rinking. The coaches won’t be too cold and the players from Vancouver should be okay with what’s expected. It’s perfect for what we need; the players and the fans that come out to watch are going to have a good time and they’ll be as comfortable as they can be.”

Northern Spirit Transportation is sending a fan bus to the Ernie Sam Memorial Arena from Prince George, leaving 11:30 a.m. from the Kin Centre.

The Winter Classic is the second game of a weekend series between Cariboo and Vancouver, with game one being played (indoors) on Saturday also in Fort St. James.

The Cougars have one player from the District on the roster in Lane Goodwin.