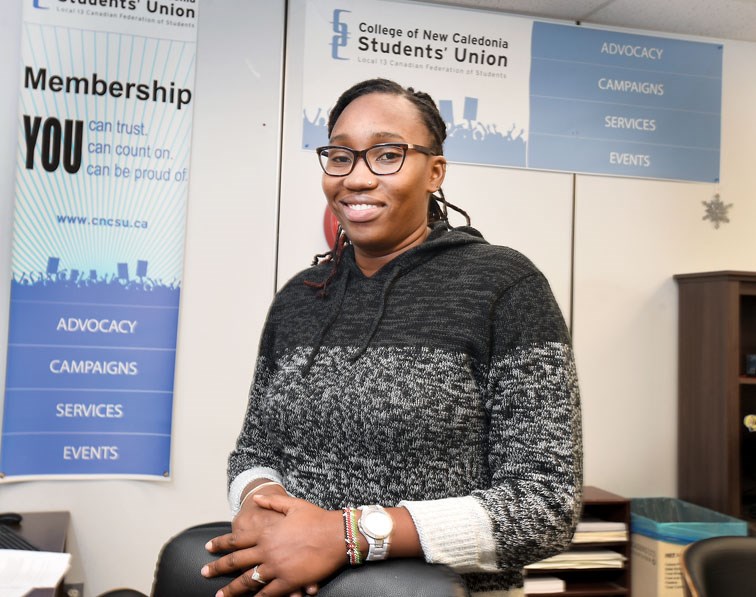 Leila Abukakar, shown in the student union office at the College of New Caledonia, is a graduate of CNC’s business and marketing management programs who has received her permanent residency. – Citizen photo by Brent Braaten

Prince George is seeing a significant increase in international students who are choosing to remain in the city after graduation.

Overall, the number of study permit holders in the city almost doubled over the last two years, from 960 in 2015 to 1,715 as of November of 2017, according to Immigration, Refugees and Citizenship Canada.

If Prince George is able to retain these students, the city will have bucked the trend elsewhere in the country. According to a study conducted by Statistics Canada, 75 per cent of international students leave Canada in the years after graduating, due to difficulties in finding work, finding social connection or navigating immigration requirements. However, during their studies, most students plan to remain in the country long-term.

Another study, conducted by the Canadian Bureau for International Education, found that 59 per cent of international students viewed the potential of permanent residency as a deciding factor in their decision to study in Canada.

So far, there are indications the city is doing well in retaining these students. Neeru Gupta, a settlement coordinator for the Immigrant and Multicultural Services Society of Prince George, said many graduates feel satisfied with their experience in the city and wish to remain.

“I would say I haven’t seen anybody who’s returned to their home country,” Gupta said.

The retention of these qualified international graduates could have many benefits for the region. Aside from the changes in culture and perspective that might result from new immigration to Prince George, most research indicates the population might bring significant economic benefits. Statistics Canada has found new immigrants are more entrepreneurial than Canadian-born residents. A significant and increasing number are studying professions such as nursing or social work, which are in high demand in the region.

But some recent graduates have suggested that local post-secondary institutions, as well as the region as a whole, may need to work harder to keep these highly educated young people in the north.

Leila Abubakar’s story could in many ways be looked at as a model success story of an international student in the north.

Recently, the Kenyan graduate of CNC’s business and marketing management programs received her permanent residency, a significant milestone in gaining full citizenship. She currently works as a front manager at Costco, while acting as the executive director of the CNC Students’ Union. Last month, she was recognized by the Prince George Chamber of Commerce as one of the city’s Top 40 Under 40.

But Abubakar acknowledges that her recent success was partly due to simple luck. She submitted her application for permanent residency in late 2016, soon after the federal government made changes to its immigration points system for skilled workers. A friend of hers, another international student who had also graduated, submitted her application for permanent residency earlier in the year and was not so lucky.

“I got my papers six or seven months ago,” Abubakar said. “She hasn’t gotten hers.”

Her friend has waited over 21 months to hear word about her application for permanent residency. Abubakar said she waited between two and three months. The issue underscores the uncertainty international students often face when attempting to plan a future. Rules, qualifications, even federal programs for eligibility for permanent residency often change depending on who’s in power in Ottawa.

In 2015, the federal Conservatives under Stephen Harper introduced changes to skilled worker programs, the most popular category under which international students apply. The changes introduced the express entry program, which officials claimed would streamline the process. Instead, the process ended up favouring skilled workers applying from abroad over graduating students who were actually in Canada.

By November of 2016, the Trudeau government introduced changes to express entry, which then gave significant advantages to students. Applicants for permanent residency who had studied in Canada, or who had advanced language skills in english or french, gained higher points.

The changes were widely praised by immigration lawyers and consultants who worked with students.

Gupta, who works closely with international students, said they often apply for permanent residency under B.C.’s Provincial Nominee Program, under the skills immigration stream, as well as under express entry. She said the current processes for applying under these streams are not overly difficult, but acknowledged many students feel a pressure to apply early out of fear of policy change from Ottawa.

“Everybody’s kind of anxious. The rules might change any time,” Gupta said.

Students who have gained a work permit after graduation usually can remain in Canada for a three-year period, which allows graduates to choose which program for permanent residency application suits them best.

Abubakar completed her application for permanent residency without any assistance. She said she spent three full days preparing her application, and provided extensive detail about her work experience and education.

“I made it so that there was no reason to call me,” she said with a laugh.

Despite the time it took Abubakar to complete her application, she also said the process was not overly difficult and was largely explained on the IRCC website. But she also said that students who require assistance in navigating the technical details of permanent residency application do not have the option on-campus at CNC.

Both CNC and UNBC have international student centres that provide academic assistance, as well as many other services to ease the culture shock, for newly arrived students. But representatives from both institutions acknowledged that neither have staff dedicated or trained in assisting students with applications for permanent residency. IMSS is the only local agency that is equipped to aid international students with permanent residency applications.

CNC’s centre does have a staff member, certified by the Immigration Consultants of Canada Regulatory Council, who assists students with applications for post-graduate work permit applications, which allow students to temporarily remain in Canada after graduation and work.

But some students also face challenges in entering the job market in areas that are related to their field of study.

Zeyi Tong, an international student from China, arrived in Prince George as a graduate student in environmental studies. Her UNBC graduate research focused on methods of eliminating industrial contamination in soil through the use of absorbent material.

But since graduating last year, Tong has struggled to find a position in her field in the region. She currently works as a sales representative at Value Village.

“It’s hard, especially because I want to stay here in Prince George, not anywhere. Here, the job market isn’t big. Most of the companies at the career fairs, they want students who study forestry. So it’s a different area,” Tong said.

Tong said she has applied for between 20 and 30 positions at environmental consulting firms, but has yet to land a position. Some employers have stated in their postings they are unwilling to hire international graduates, while others, such as the provincial government, require permanent residency for consideration.
Tong is currently applying for positions outside of the region.

Gupta said the local job market is challenging for recent graduates, especially those that may be lacking in work experience in Canada.

“Many have completed their diploma in IT and still they’re working as a food supervisor,” she said.

Although these students may not be working in their desired field, Gupta said most students that are working after graduation are often successful in getting permanent residency.

The experience of working outside of one’s field of study may be familiar to many students, both Canadian and international. But Abubakar said international students face an added pressure because of the disproportionately high tuition fees paid by these students.

Abubakar, who works two jobs, said she ended up paying close to $100,000 for her college and university education in Prince George. Her family provided significant financial support.

Simka Marshall, the chairperson of the B.C. Federation of Students, of which the CNC Students’ Union is a member, said the cost of tuition for international students places a high burden on these students, which they continue to face after they graduate.

The BCFS has recommended the provincial government to provide a cap on the amount that universities and colleges are allowed to raise international tuition each year. A report based on their recent research on international students is due to be released later this month.