Jul 24, 2019 5:00 AM By: Glacier Media
Previous Next
1 / 1 Kam McLeod & Bryer Schmelgesky are considered at-large and connected to the Dease Lake and Alaska Highway homicides in northern B.C. (via B.C. RCMP)
Expand
Previous Next

Editor's note: This story has been updated. Click here for the latest information.

cross-country manhunt is underway for two B.C. teens considered suspects in the murders of two young, international tourists on the Alaska Highway, as well as the death of a man on Highway 37 near Dease Lake last week.

Kam McLeod, 19, and Bryer Schmegelsky, 18, both from Port Alberni on Vancouver Island, are considered dangerous and were last seen in northern Saskatchewan, police said this morning (July 23).

By the afternoon, Manitoba RCMP reported the teens may have been seen in Gillam, nearly 1,100 km northeast of Winnipeg.

Both are wanted in the double homicide of Australian Lucas Fowler, 23, and American Chynna Deese, 24, sometime on July 14 or 15, as well as the death of an older, unidentified man found near their burning pickup truck days later on Friday (July 19).

"Consider them dangerous, do not approach, and call immediately 911," RCMP Sgt. Janelle Shoihet said during a news conference today.

The teens were last seen driving a grey 2011 Toyota RAV 4, both six-foot-four inches tall and weigh about 170 pounds, however, police warn they may be driving a different vehicle and may have changed their appearances and clothing.

The news is a surprise turn to the investigations.

McLeod and Schmegelsky were first considered missing under suspicious circumstances after their Dodge pickup truck and camper was found on fire near the Stikine River on Friday.

A dead man in his 50s was found nearby a short time later, but investigators have since gathered new information leading them to believe they are suspects in all three deaths, Shoihet said. She could not divulge specifics.

"This investigation is very complex and ever-evolving. Investigators continue to follow up on tips, and review the physical and digital evidence collected," Shoihet said.

RCMP did not release specifics about where the teens were last seen in northern Saskatchewan, but released photos captured from CCTV video from a store where they were last seen.

Police agencies across Canada have been notified about the wanted teens, Shoihet said.

"We believe that they're likely continuing to travel but we don't have a possible destination," Shoihet said. 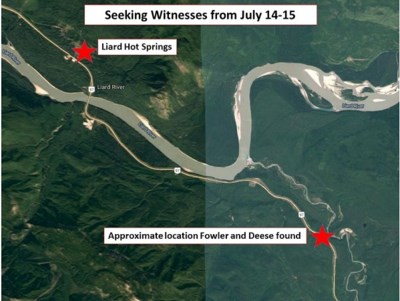 The first victims were Fowler and Deese.

They were found shot to death outside their van south of Liard Hot Springs on Monday, July 15.

The couple had just started their road trip when their van broke down 20 kilometres south of the hot springs on the afternoon of Sunday, July 14.

Witnesses say they last saw the couple smiling and sharing a meal that afternoon despite having broken down.

The engine of their van had reportedly flooded, but Fowler reportedly knew how to fix it.

"Obviously their van had broken down, but they were still happy and smiling. They were having lunch or a bit of a meal when we pulled up," Curtis Broughton, a mechanic from Fort Nelson, told the Australian Associated Press.

"He seemed like he had everything diagnosed properly. The vehicle was flooded out and they were going to try and get it going again."

Another witness saw the couple later that evening in some sort of confrontation with a bearded man standing in the middle of the road.

The couple looked bothered, and the man was staring at them with his arms open.

“He looked frustrated or something,” Alandra Hull told Australian TV outlet Nine News, which sent reporters to northeast B.C. to cover this story along with News Corp Australia.

Hull spoke with police and helped a sketch artist develop a portrait of the man.

Police say the unidentified man is a person of interest wanted for questioning.

They add he may be associated with an older model Jeep Cherokee with a black stripe on its hood similar to a racing stripe, and a black light/bull bar with small, covered lights.

Fowler and Deese were found around 7 a.m. on Monday, July 15.

Trevor Pierre, a medic, found their bodies in the ditch near their van, about five metres apart.

One of the van's back windows had been smashed, and its back doors were left open.

"I don't know how anybody could live with themselves after doing what I saw," Pierre told Nine News. “You see this young, beautiful lady laying there … that’s vivid into my mind."

There are at least 30 investigators reported to be working the case. 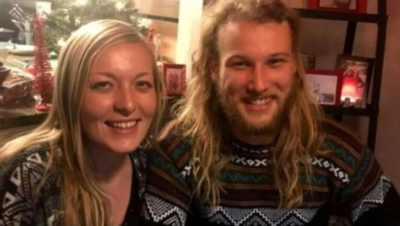 Fowler and Deese were globetrotting adventurers — he, from Sydney, Australia, and she from Charlotte, North Carolina.

They met in Croatia in 2017, and spent their time travelling through Europe, Central America, and Asia.

They were in Canada to spend time working at a ranch in Hudson's Hope and visit the country's iconic parks.

Fowler's father, Stephen, is a senior-ranking police officer with the New South Wales police department, and spoke to media in Surrey on Monday (July 22).

He said the murders have devastated two families and nothing in his job as a police officer had prepared him for the news he received about his son's shooting death.

"Our son Lucas was having the time of his life travelling the world. He met a beautiful young lady and they teamed up, were a great pair and they fell in love," said Fowler.

"We were overjoyed for Lucas. He came to Canada and he planned a trip in a van with Chynna," Fowler said. He added his son had saved up his money after working in Sydney, so he could travel to B.C. and join the love of his life, he said of Deese, who had arrived from her home in Charlotte.

Fowler had been working in Hudson's Hope since February, according to CBC, when he left the ranch with Deese on Saturday, July 13, for their trip north.

"He loved animals," Erika Weder told CBC. "He wanted to get more experience with animals, learn about ranching in Canada in general, just to experience the West. That was one of his dreams."

Fowler planned to return to the ranch at the end of July to continue working through the summer.

"How can you react? It's a shock, of course," Weder said. "You hear about things like that in movies and all of a sudden it's someone you know

Deese was a graduate of Appalachian State University in North Carolina, with degrees in business and psychology.

On her Couchsurfing page, she wrote she was "traveling the world and looking to meet new people and experience new places from a local's point of view."

“They were deeply in love,” Deese's brother, British, told the Charlotte Observer. “They met traveling and that’s just what they did — travel."

They are expected to travel to the Northeast sometime this week, but Deese's family will not be travelling to Canada, RCMP said.

Mounties have released surveillance video on its website of Fowler and Deese at a gas station in Fort Nelson on July 13, when they arrived at 7:30 p.m. and left around 15 minutes later. 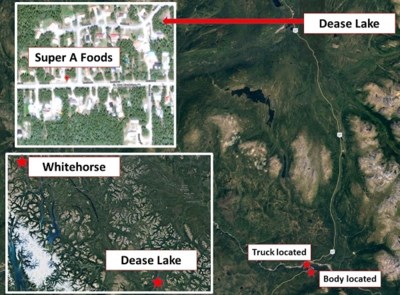 (via B.C. RCMP)
McLeod and Schmegelsky's Dodge pickup truck and camper were found on fire on Highway 37 near the Stikine River south of Dease Lake on Friday, July 19.

A man's body was discovered by investigating officers at a highway pullout a short time later.

No specifics on the man's cause of death was released, and police have yet to call it a homicide.

"We're still going through the steps in order to confirm the details surrounding that man's death," Shoihet said.

Police are still working to identify the man, and have released a sketch in hopes of a lead. He had a beard, a heavy build, and was between age 50 and 60 years old.

Who are the two teens?

If they had taken the ferry to Prince Rupert, the route to Whitehorse is up Highway 37 through Dease Lake.

However, police had reports of them being seen travelling south from the Super A general store in Dease Lake at about 3:15 p.m. last Thursday.

Schmegelsky’s father, Alan Schmegelsky, said he received a message from Bryer on July 12 saying he and McLeod were headed to Alberta and might be unreachable.

Schmegelsky described his son as “a smart kid,” into computer games, curious about his ancestry and just starting to become less introverted.

Neither is violent or into drugs, he said. He said both enjoy games simulating war that involve hunting and camouflage.

McLeod’s online presence indicates an interest in the Communist Party of Canada and the Young Communist League.

His little-used Facebook page features a skull with geometric designs, one half in black, white and grey, the other in blazing colours.

Another picture depicts a lion with a blazing rainbow of colour for a mane.

Mounties urged the public to be patient as they carry out their investigation.

"This is a fast-moving investigation and is compounded by several factors, which include the vastness of the north, the fact that individuals have made some efforts to move out of jurisdictions," said B.C. RCMP Assistant Commissioner Kevin Hackett.

"All those things contribute to our ability to quickly identify additional information or additional facts."