Exploration Place is hoisting a cold one to one of Canada's kings of suds. Ben Ginter made his fortune in the construction sector but he made his fame in the brewing industry.
Dec 8, 2017 10:27 AM By: Frank Peebles 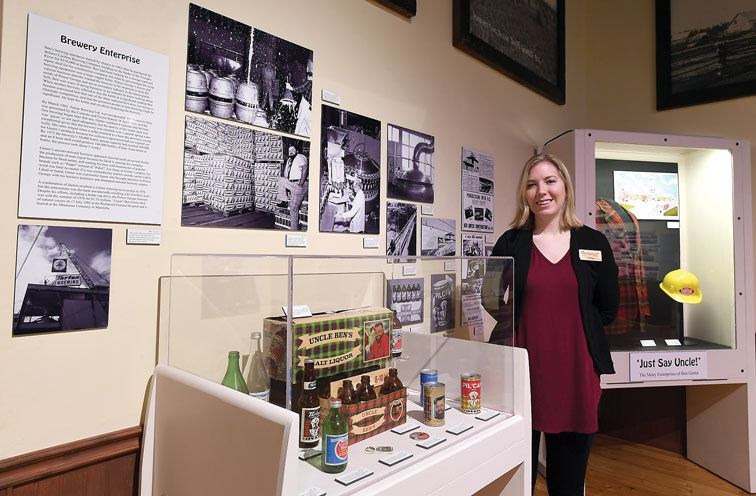 Exploration Place is hoisting a cold one to one of Canada's kings of suds.

Ben Ginter made his fortune in the construction sector but he made his fame in the brewing industry. The company he founded, Pacific Western Brewery (PWB), is today considered by some to be the largest craft brewer in Canada, the oldest all-B.C. brewing company in the province (the Columbia Brewing Company dates back to 1898 but is owned by the Labatt consortium), and records seem to indicate it is second only to Moosehead of New Brunswick as the oldest active brewery in Canada not owned in some way by a non-Canadian beer corporation.

The archives and repositories of Exploration Place contained a number of references to Ginter, who founded PWB in 1957 on the site of an abandoned brew factory on the north shore of the Nechako River where the John Hart Bridge now crosses. He had every intention of bulldozing the site to make it a parking lot for his fleet of industrial vehicles, but something pushed his two most significant buttons: his sense of a good business deal and his sense of cantankerous fight.

"It all happened because of the big brewing kettle," said Alyssa Gerwing, the archival staffer who arranged the exhibition. "We have a great photo of that kettle. Ben put a ridiculous price tag on it. He put it up for sale for the same price he bought the entire property for. Then he got a phone call from one of the big brewing companies willing to pay the asking price. That set off all kinds of bells in Ben's mind."

He surmised that the big company was trying to block a competitor from starting up a new beer venture. If they were so concerned that they would pay such an inflated price to wrest a kettle from a neophyte, there must be big money to be made in the beer sector, he deduced. He so hated the idea of selling out an opportunity to some big-city dandy of a company that he did exactly what they were trying to surreptitiously eliminate: he put that kettle to work against them.

"He was definitely an unconventional guy," said Exploration Place curator Alyssa Tobin. "He wasn't Scottish but he established his Tartan beer line because he liked the sound of the word, and he figured it would be fun to market."

He even grew swarthy facial hair for the purpose of imaging the beer. He was a clean-shaven man as a construction magnate, and was so impatient to change his image for brewery marketing purposes that he glued a false one on for one of the first photo shoots. The exhibition shows that photo for Uncle Ben's Malt Liquor featuring his smiling face with whiskers that just don't look quite right. It might have been Canada's first beerd.

"He was always pushing the boundaries and forcing his personality into his business dealings, and even when he sounded self-serving, when you examined the actual points he was making, there was a lot of wisdom and intelligence to it," Tobin said.

"He tried all kinds of things to sell his beer, and he might have seemed like a crackpot at the time, or underhanded, but truly he accomplished a lot of innovations," said Gerwing. She listed things like the first brewery in Canada to make malt liquor, the first to sell beer in pull-tab cans, and also the first using pull-tab bottle caps. He was the first to sell pop in stubby bottles (in a parallel twist, PWB was the first brewery in Canada to go back to the vintage stubby bottles in 2011), and the first to offer refunds on each item sold.

This was one of those examples that appeared underhanded, in its day, and drew major ire from the established brewing conglomerates. Because sales prices were regulated by law, and Ginter wished to sell his beer at a lower prices, he simply taped a dime to each bottle and can so the purchaser got 10 cents off of each item purchased.

He also took note of popular beer titles in other jurisdictions and borrowed from those names, like, for example, selling a line of Paaps and of Budd (aping the established Pabst and Budweiser names advertising out of the U.S. but not widespread in Canada at the time).

He also marketed PWB swag like buttons and keychains with a Don't Litter message on them, tying product to a social cause.

If anyone has any of these homonym cans at home, or virtually any of PWB's Ginter-era items, the museum would love to add them to their collection.

"I learned a lot, working on this display," said Gerwing. "I grew up in Prince George, so I'd heard the name Ben Ginter and I knew a few little facts, I think everyone knows where Ginter's Field is and the old foundation where his house used to be, but I didn't know that Grace Crescent at the bottom of the field is named for his wife, and James Drive and Shane Place are named after his sons. So much was new to me, and really interesting stuff."

The place now called Ginter's Field, a municipal dog park today, was where Ginter operated his other passion project Green Valley Ranch. He was an award-winning breeder of registered Hereford cattle and Arabian horses on what was then 175 agricultural acres topped by his eccentric mansion (it had a cowhide wrap around the bar, an indoor pool rare for its time, and other unique features) at the crest of the driveway that extends off the western terminus of Massey Drive, adjacent the Pinewood and Westwood neighbourhoods.

Some of the photos in the Ben Ginter exhibition depict aspects of the now-razed house, the agriculture livestock, the construction equipment and other aspects of Ginter's life.

"He was this epic figure in local culture, and certainly not always a popular person, often controversial, but always colourful and always a big booster of Prince George even when that wasn't exactly a popular thing to do," said Gerwing. "He is also a tragic figure in a way, because he got in too deep with bank financing and that's how he lost it all, when they foreclosed. It all went down the drain. That was the Citizen headline of the day.

"But you can't really talk about the history of brewing in Canada without substantially talking about Ben Ginter and PWB," she added. "He is starting to get that credit, now that the craft brewing industry is taking off and people are looking back at how that all began. People in other parts of Canada may not have heard of him, but those beer historians are now discovering all the innovations and all the history he was responsible for. He shook things up so much. We are so proud to be able to tell that story a little bit."

The Ben Ginter display will be up for public viewing during the winter months. That section of the museum will now be home to all-local historical exhibits that rotate quarterly. Much of it will come from the Exploration Place's own collections. Ginter is the first.