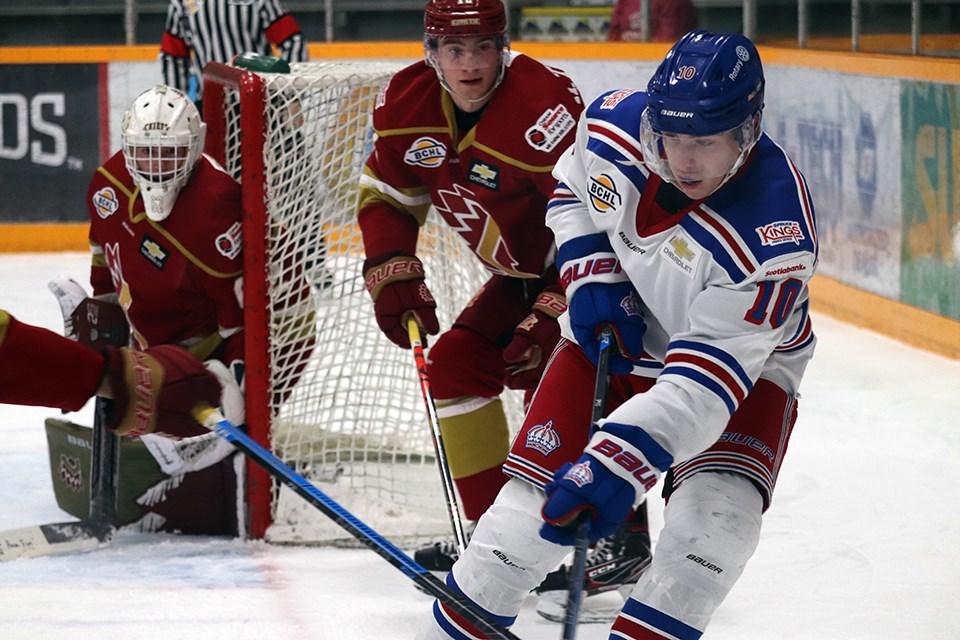 Corey Cunningham (#10) has the puck deep in the offensive zone for the Prince George Spruce Kings at home against the Chilliwack Chiefs. (via Kyle Balzer, PrinceGeorgeMatters)

A shortened regular season, from the normal 60 games, is presumably on the offer, but the final decision is pending approval from B.C.'s Provincial Health Office.

“This is obviously good news for us as a league and organization today. Having a date to plan for will allow us to release new ticket packages, sponsor packages, and will let us re-launch as we normally would do in March of a normal season.

“We don’t want to rush into these plans given that we are not sure how many seats we’ll be allowed to sell at that time,” added Anderson, “but we are also confident that our fans will fill the Rolling Mix Concrete Arena to whichever capacity it’s allowed.”

The 2021 Centennial Cup Canadian Junior 'A' championship tournament, currently scheduled for May in Penticton, will likely be pushed to June.

The 2020-21 regular season was originally to start in early October.

“We’ve been having discussions with the Ministry of Tourism, Arts and Culture since March around a safe return to play,” said BCHL Commissioner Chris Hebb in a news release.

“The PHO has indicated to us that waiting until December gives us the best chance at ensuring we have an uninterrupted season, while also maximizing the amount of regular-season games we’ll be able to play.”

.@SpruceKings to tentatively drop the puck as early as Dec. 1 as the BCHL announces its 2020-21 plans pending approval from B.C.'s Provincial Health Office.

"... waiting until December gives us the best chance at ensuring we have an uninterrupted season." | #CityOfPG @PGMatters pic.twitter.com/Db87uzG7Pr

B.C. guidelines ban gatherings of more than 50 people, so the BCHL cannot plan for having fans in attendance.

Nobody, however, can anticipate what the rules will be in December.

“The reality is that, for us to be able to operate, we need to have fans in our buildings,” said Chairman of the BCHL Board of Directors Graham Fraser in the same statement.

“It became clear from our discussions with the PHO that the best way to accomplish this would be to delay the start of our season to give them time to assess the effects of a potential second wave of COVID-19 during flu season.”

Sources say the league is hoping for eventual socially-distanced attendance of between 25 to 50 per cent of arena capacities.

Training camps are set to start Sept. 8 that align with the restriction of gatherings of up to 50 people.

The league says teams can continue to run summer invite camps up until that date, which includes the Spruce Kings' Modified Hockey School set to take place Aug. 17 to 21 and 24 to 28.

The 2020 BCHL playoffs were cancelled mid-stride in March because of the pandemic.

The major-junior Western Hockey League, which includes the Prince George Cougars, has announced a start date of Oct. 2 but has said socially-distanced attendance of up to 50 per cent capacity is needed to make that financially viable.