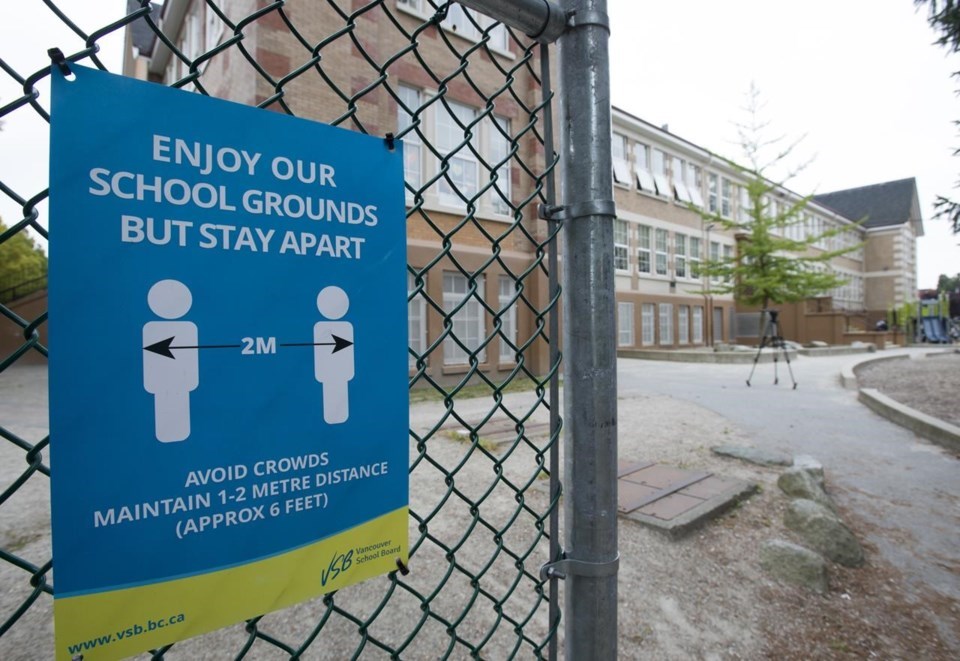 British Columbia's education minister hopes the government will be able to avoid school closures under any scenario but he would defer to advice from public health officials should COVID-19 cases worsen.

Rob Fleming said Tuesday that the government would look to keep schools and daycares open even if the province were to lock down the economy to stop community transmission.

"That doesn't mean that we wouldn't amend how we deliver education," he said in an interview.

"But I think we've learned from the early days of the pandemic that shutting down schools was probably a mistake when we should have focused on safety protocols."

Those involved in the education system agree that it is important to keep children in school so they do not suffer developmental setbacks, he said.

Fleming said schools are safe although there is "increasing concern" about community transmission in the regions covered by Fraser Health and Vancouver Coastal Health, especially in Surrey.

Provincial health officer Dr. Bonnie Henry announced bans related to social gatherings, group fitness, workplaces and travel in the two regions on Nov. 7 to curb the spread of COVID-19. The restrictions are in place until Monday.

Fleming said he is waiting for the results of those restrictions before making further decisions with advice from health officials.

"It may include a modified break schedule over the winter. It may include some direction from public health on the various layers of protection in the school including masks. It may look at some other amendments we may make."

Four out of 643 schools in the Fraser Health district have been closed either because of an outbreak or staffing shortages related to COVID-19. The other schools remain open and the level of transmission remains "incredibly low," Fleming said.

Henry has said schools are a reflection of what's happening in the community, but COVID-19 transmission rates are lower in schools than elsewhere.

"It's incredibly important for families and for children to have in-person, in-class (education), but we're looking at all of our options," she told a news conference on Monday, referring to an extended winter break.

Fleming said officials believe children may be safer in schools.

"If you were to send kids home right now and suspend school, public health would be very concerned that kids would be having playdates and all kinds of informal activities that would actually put them in an unregulated area of greater concern, which would be transmission that occurs in households."

Thanksgiving and Halloween gatherings brought spikes in cases and officials are worried the winter break could bring similar results, he said.

"We do want students and families to enjoy time together, and we want them to have a much-needed rest. So, we're going to consider that. We haven't made any decisions yet."

B.C. officials are watching a number of western European countries for how they manage their schools and what community restrictions they implement to curb the spread of the virus, Fleming said.

On Nov. 2, Germany embarked on a four-week “lockdown light” where restaurants, bars, sports and leisure facilities were closed, but schools and shops remain open.

France, which has had more infections since the pandemic started than any other European country, is in the midst of a month-long lockdown that has left most adults confined to their homes for all but one hour a day, although schools remain open.

"We look, of course, to other provinces, that we've been in close contact with. And early on in the development of our plan, we leaned most heavily on Denmark and New Zealand to create the K-12 safety guidelines for B.C. schools," Fleming said.

The minister stressed the importance of children and youth "being around peers" and learning not just academics but also social skills, including how to cope during a pandemic.

"Kids are actually quite adaptable, they've learned, you know," he said.

"I think we worried, will they wash their hands? Will they follow the rules and stay two metres apart in the hallways and not get into each other's personal space, be respectful? And they've shown they're very, very good at that."