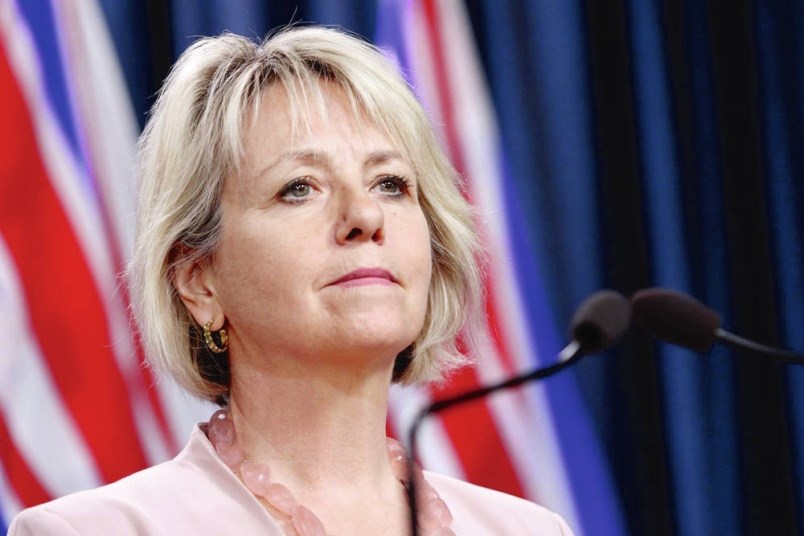 Changes could be coming in B.C. as health officials continue to struggle to contain rapid COVID-19 spread and transmission.

With today's numbers, the new provincial total is 24,422 since the pandemic struck in January.

Out of the newly recorded cases, officials said Northern Health tallied 13 of those, bringing the authority's total to 552 since March, a day after it broke its own daily record of 21 infections.

Active health monitoring has risen to 9,871 people who have recently come into contact with someone previously infected with the virus, while 16,914 have recovered.

Officials added there have been 10 new deaths from the virus in the past day, which brings the new provincial fatality rate to 320. Yesterday also saw a double-digit death count with 11. This is the first time B.C. has recorded two consecutive days with double-digit deaths.

Dr. Henry in the statement: 'This second surge is putting a strain on our health-care system, our workplaces and us all.' #COVIDbc #COVID19 #cityofpg #bc #bcpoli #bced #covid19bc @PGMatters

There has also been an outbreak declared at Peace Villa in Fort St. John, according to Dr. Henry.

Northern Health says it is implementing enhanced COVID-19 precautions at the Peace Villa care home following lab confirmation of a single COVID-positive case in a worker at the site.

The health authority said Wednesday afternoon that medical health officers have declared a facility outbreak, and that communication with Peace Villa staff, residents, and families is underway.

Northern Health said it was declaring the outbreak as a precaution, and that the declaration will be in place until at least Nov. 25, which is 14 days after any potential exposure to the confirmed case within the facility.

"At this time, there is no evidence of transmission of illness among staff or residents within the Peace Villa facility," the health authority said in a statement.

"In this case, it is a single lab-confirmed case in someone who worked during their potential infectious period."

Earlier today, B.C. Premier John Horgan appeared in front of the media, urging people to change their behaviours as cases rise rapidly while also stressing non-essential travel throughout the province should not happen.

"This is not the time to go storm watching on the West Coast of Vancouver Island," he said.

"This is not the time to be making plans for large gatherings at Christmas. If you're not required to travel, you shouldn't travel."

Horgan also hinted that there might be tighter restrictions coming, saying Dr. Henry was finalizing details on orders that she will be bringing forth tomorrow. It is unclear what the orders are or where they could be applied.

Horgan says that Dr. Henry is finalizing details on orders that she will be bringing forward tomorrow #COVIDbc #COVID19 #cityofpg #bc #bcpoli #bced #covid19bc @PGMatters

Yesterday (Nov. 17) saw a flurry of COVID-19 activity in the north with flights, schools, health warnings and details about recent deaths being made public.

Northern Health issued a statement urging residents in the authority to adhere to COVID-19 precautions and behaviours, saying they are concerned with a rise of cases in the region.

"Recent orders in the Fraser Valley issued by Provincial Health Officer Dr. Bonnie Henry to address cases in the Lower Mainland are not currently directed at Northern Health," the statement read.

"However, we need your support to avoid more stringent measures. We are encouraging against non-essential travel and are asking people to ensure they are following all of the current orders, guidance, and advice."

The Northern Health authority also confirmed to PrinceGeorgeMatters yesterday that the fourth and fifth tragic passings were two residents living in the Rotary Manor in Dawson Creek, where a facility outbreak was declared on Nov. 2.

The one reported on Nov. 13 by Provincial Health Officer Dr. Bonnie Henry was in his 70s, while the other reported by Health Minister Adrian Dix on Nov. 16 was in his 80s and was one of nine in total that passed on the weekend.

The other three people who lost their lives from COVID-19 in northern B.C. have all been women; a Nak'azdli Whut’en elder in her 70s, another woman in her 70s and one in her 60s.

In the afternoon, Van Bien Elementary School in Prince George was listed for COVID-19 exposure as well as another school in the authority located in Chetwynd.

PrinceGeorgeMatters obtained a letter that was sent to parents of students at the school (Nov. 16) from Northern Health.

It explains students and staff may have come into contact with someone who tested positive for the virus between Nov. 9 and 10, but that the safety protocols in place for Van Bien were ‘followed precisely’ and the risk of any further spread is considered low.

Parents are being advised to monitor their child’s symptoms between now and Nov. 24 at midnight, which will mark 14 days after the last date of possible contact.

Chetwynd Secondary was also added to the list, citing Nov. 13 as the exposure date for the SD59-Peace River South school.

Nine other northern B.C. schools have been flagged for possible COVID-19 exposure:

In the evening, the BCCDC also flagged a Prince George bound Air Canada flight for COVID-19 exposure from Nov. 10.

Air Canada flight 8201 from Vancouver (YVR) to Prince George (YXS) on Nov. 10 was the affected flight.

Passengers in rows one to seven were listed in the update.

The other flights involving YXS that had a passenger exposed to COVID-19 are:

Since March 27, passengers seated near a case of COVID-19 that was recognized after arrival are no longer being directly notified of their potential exposure, but are asked to check online and monitor their symptoms.