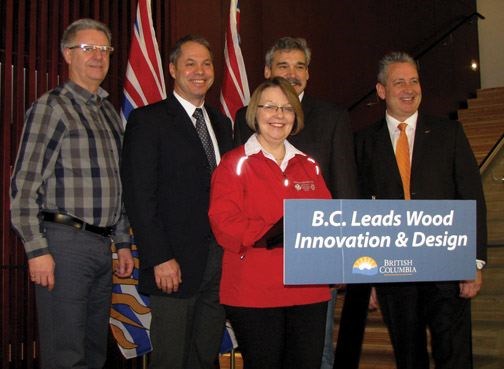 Famed creative thinking school Emily Carr University of Art + Design announced it was moving to Prince George with a set of programs specifically invented to dovetail with the UNBC wood engineering endeavors already happening there.

"There are few institutions that carry the reputation of Emily Carr," said Shirley Bond, Minister of Labour, Jobs, Tourism and Skills Training during the introduction ceremonies held at the WIDC building. "Many of you will think of the art side, but Emily Carr is also the home of excellent applied research."

She recalled, during a tour she once took while Minister of Advanced Education, that students there were working on new designs for mobility equipment for people with special needs, and sports clothes that allowed for superior airflow to keep athletes cool.

"I am delighted to announce Emily Carr will be a permanent resident of downtown Prince George in partnership with another fantastic institution: UNBC. They have agreed to collaborate, work together, and use this building for its intended purpose."

"All the good ideas have yet to be thought of," added Prince George-Mackenzie MLA Mike Morris, meaning the outcomes of the partnership can't be predicted. The only agenda being imposed at this point was to bring their best creative mentalities into the same conversation and the innovations would grow from there.

UNBC president Daniel Weeks said he had heard a refrain for economic success during the past few days at the B.C. Natural Resources Forum, and that was diversity.

"Diversity is the hallmark of our provincial and national economies," he said. "Well this partnership is diversity in our educational programming. The fact these two great institutions are coming together is enabling - bringing incredible students here to do incredible things."

ECU vice-president and provost David Bogen was at the event and added: "It gives us great pleasure that Emily Carr be the final tenant in the tallest contemporary wooden structure in North America."

This is not the first time Emily Carr has set up shop in Prince George. There was a fine arts partnership with CNC more than 20 years ago, and a UNBC Continuing Studies summer program for artists held this past year.

Furthermore, Prince George residents like Heather Oland and Judy Russell have served on the institution's board of directors in recent years, a provincial program by ECU to foster aboriginal art had some local connections, and in the mid-2000s UNBC came close to establishing a fine arts degree program in concert with ECU.

It is also not a new thing for ECU to focus its educational programming on wood. Christian Blyt, for example, is a faculty member who is an award-winning wood designer.

It is not clear yet how many ECU students and staff will be at the Prince George facility. Bogen said the target date for students to get to work was August 2016.

"There are no other programs like this in Canada," he said, indicating careful planning was still neededwith UNBC, with First Nations and with industry so graduates will be real-world ready.

"We know that we will be developing programs together, broadly speaking, in the realms of design, secondary manufacturing, studying the properties of wood so we can maximize what we can do with wood, and we will also continue to work with youth on the use of wood in art," he said. "We are very serious about talking through exactly what this is going to be with the community of Prince George, and we have to step carefully in this planning stage so we don't get ahead of the wants and needs of our major stakeholders."