Aquaculture industry is headed for a sea change 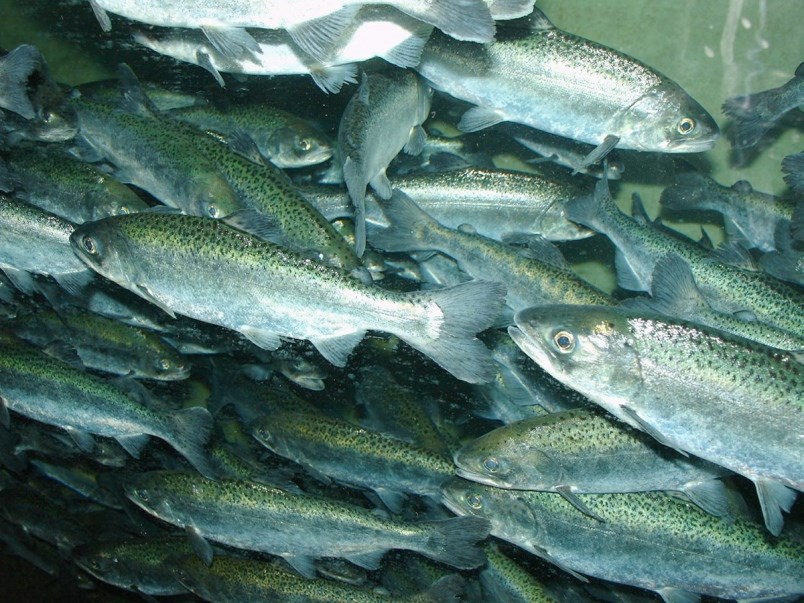 Chinook salmon in a pen. (via Wikipedia)

Planning a salmon barbecue? Your options will be limited this year. With a complete 2019 closure on Fraser River sockeye, due to dismal returns, your options are to buy Alaska sockeye or farmed Atlantic salmon.

And, as the world’s population grows, and wild-capture fisheries either are maxed out or declining, farmed seafood options will become an increasingly important source of animal protein, according to a new Nature Conservancy and Encourage Capital report.

Towards a Blue Revolution is largely aimed at the investment community and lays out the opportunities and risks, noting that certain next-generation systems such as land-based recirculating aquaculture systems (RAS) or ocean-based fish farms will require impact investors to take the lead before more risk-averse investors follow.

Aquaculture is already a $244-billion industry, the report notes, and is the fastest-growing sector in the global food industry.

“Conservative estimates suggest that by 2030, the aquaculture sector will require an additional $150 [billion to] $300 billion in capital investment to expand production infrastructure capacity to meet projected demand growth, the report states.

“While private investors of all types express growing interest in the aquaculture sector, many tend to shy away from capital-intensive investments such as RAS and offshore aquaculture, especially for technologies that are unproven at scale and for first-time businesses implementing those technologies.”

For a country such as Canada, which already has an aquaculture industry and 80,000 kilometres of marine coastline, there could be significant potential, not only in conventional salmon farming, but also in shellfish production, as Don Noakes detailed in his Oceans of Opportunity report last year.

The Nature Conservancy report notes that 60 per cent of the world’s wild-capture fisheries are harvested at their maximum sustainable levels, and 33 per cent are overfished. Climate change already appears to have hurt some wild fisheries — southern range Pacific salmon being one of them.

“With the world population expected to reach 9.7 billion by 2050, global demand for seafood is likely to grow rapidly, and aquaculture will account for most, if not all, of that growth,” the report states.

Pound for pound, farmed salmon has a significantly lower environmental impact than beef, pork or poultry.

“Aquaculture can have a lower environmental footprint than most meat production in terms of freshwater use, CO2 emissions, and land usage,” the study says.

Whereas it takes one pound of feed to produce one pound of farmed salmon — a feed conversion ratio of 1:1 — the ratio for beef is 8:1, pork 4:1 and chicken 2:1.

The report acknowledges that there may be “bona fide impact investment strategies” in the area of conventional coastal open-net fish farming, but it largely skirts the topic to focus on three other areas:

From an investor’s perspective, shellfish farming is the easiest and least capital intensive. Shellfish farming in B.C. is already a thriving subsector of aquaculture (valued at about $270 million per year), with room to grow.

It is unclear whether there is opportunity for growth in B.C.’s conventional salmon farming, and that doubt could discourage the investment needed to develop next-generation aquaculture.

Environmental groups have campaigned intensively against salmon farms in B.C., which may leave some investors skittish about investing in the province s aquaculture sector. 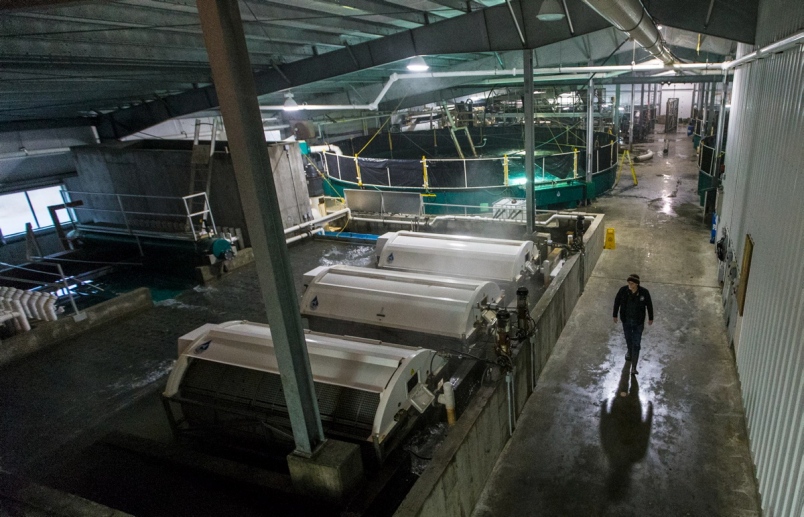 Both the provincial government and Justin Trudeau’s Liberal government are taking steps to close fish farms down in certain areas of the Broughton Archipelago, and the B.C. government has imposed a moratorium on new fish farms for several years.

“A legacy of failed projects, high capital requirements, a lack of experienced operators and unproven economics at scale has left many investors and industry players skeptical until recently,” the Nature Conservancy report states. “Our view is that the sector will remain risky in the short term, but not prohibitively so in all cases.”

John Paul Fraser, executive director for the B.C. Salmon Farmers Association, noted that RAS systems are already used in B.C. to raise salmon to fry stage before they are introduced to open-net pens. He pointed to the potential to develop hybrid systems that would reduce the amount of time salmon spend in open-net pens.

One land-based farm, Golden Eagle Aquaculture in Agassiz, raises small numbers of coho in a land-based system, and Kuterra in Alert Bay, owned by the ’Namgis First Nation, raises a limited number of Atlantic salmon.

Built largely with public and non-governmental organization money, Kuterra has struggled to find the private-sector investment needed to scale the project to the point where it would make a profit.

Earlier this year, Emergent Holdings, Whole Oceans’ parent company, offered to become a major shareholder and expand the operation. The ’Namgis rejected the offer earlier in July, but a Kuterra representative said the ’Namgis and Emergent are still talking.

Just as it led the development of open-net salmon farming, Norway has also been the leader in developing open-ocean salmon farms.

These open-ocean systems ease some of the concerns associated with coastal open-net fish farms, one of them being that they reduce the chance of migrating wild fish interacting with penned fish. That lowers the chances of disease transmission.

Designed by SalMar and built by China Shipbuilding Industry Corp., the Ocean Farm 1 fish farm is the first of a series of open-ocean pens to be built, at a cost of $300 million US. The first Ocean Farm 1 pen contains up to 1.5 million Atlantic salmon.

Fraser said one of the challenges is B.C.’s ocean depth.

He said one option for RAS is a hybrid model, in which the salmon would be reared for longer periods on land before being introduced into open-net pens.

“We are getting extremely good at RAS, and at other technologies to raise fish in a land environment,” Fraser said.

But he warned that investor uncertainty could curb improvements in fish-farming technology.

“There are a bundle of challenges that are involved in land-based aquaculture that I don’t think we’ve fully addressed, and that needs to happen,” Fraser said. “And the best way for it to happen is for companies to remain active and profitable and growing so that those revenues can be generated and targeted towards new and different kinds of aquaculture.”

One of the biggest concerns with open-net salmon farms is that a heavy concentration of fish in close confinement can lead to outbreaks of sea lice or viral or bacterial infections that can then spread to wild fish, especially if those fish get inside the net pens.

Cermaq Canada is trying to address those concerns with investments in new technologies.

One is a hydrolicer, which essentially washes sea lice off infected salmon with pressurized water without using pesticides. The $13-million system is now being used in Tofino, where about 70 per cent of Cermaq Canada’s salmon farms are located.

“We are just basically now getting to know the machine,” said David Kiemele, Cermaq’s managing director.

The other investment Cermaq Canada is planning to make is in a semi-closed containment system. 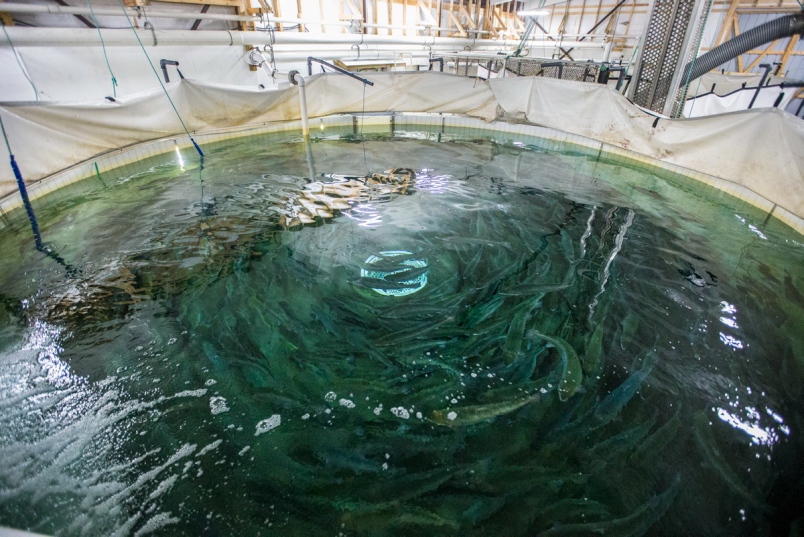 A semi-closed containment system is a pressurized polymer bag that is placed under and over a conventional net pen. It creates a barrier between the ocean and the fish, reducing the chance of penned and wild salmon interacting.

Cermaq Norway has been testing the new system in Norway and Cermaq Canada is now trying to get government approval to test one for its Canadian operations.

“I’d like to trial one, if not two, over the next five years and then understand if the technology delivers the results that we’re after to make it economically viable for us to pursue it in a larger way,” Kiemele said.

But the closed-containment system costs $5.5 million. Cermaq Canada has more than 100 net pens, so enclosing every one of them might be prohibitively expensive. In fact, it might be cheaper to build the kind of multimillion-dollar open-ocean farms that SalMar is building in Norway.

Asked if that is even on the radar, Kiemele said: “The offshore piece is something we’re taking a deeper dive into and having strategic discussions around whether or not it’s something we’d like to pursue.

“Would there be an opportunity in British Columbia for this sort of technology? Perhaps. Any time you move into these new technologies, whether it be land-based or whether it be offshore — you really have to look at the whole value chain. It might be something that’s utilized closer to our markets.

In other words, if companies such as Cermaq decided to invest in either open-ocean salmon farms or land-based systems, it might not be in B.C., but closer to their primary customers: California, for example.