More child care spaces are coming to the northern capital.

The provincial government announced today (Sept. 18) the Aboriginal Housing Society of Prince George will be opening 40 spaces funded by the Childcare BC plan.

B.C. says since July 2020, when a new milestone of close to 17,000 chlid care spaces was reached, an additional 3,634 new licsensed spaces have been created through the New Spaces Fund.

The Childcare BC New Spaces Fund has provided funding for an average of 700 new licensed spaces each month.

"The pandemic has highlighted the importance of child care, not just for children and families, but for our communities and the economy," Minister of Children and Family Development Katrine Conroy said in a news release.

On Sept. 9, it was announced Prince George would be receiving 85 new child care spaces.

“The development of new child care spaces, particularly in our downtown core, helps to fulfill a critical need that was clearly demonstrated by the city's child care needs assessment,” Prince George Mayor Lyn Hall said in a news release.

“This will greatly benefit families in our community and will help to attract families to our downtown neighbourhoods. This investment in child care along with the new condos, student housing and pool development will greatly improve and enhance our downtown core."

The new centre will be constructed downtown across from city hall and next to the Park House Condominium and above the City parkade development. The facility will be operated by the YMCA.

"These new child care spaces in Prince George and Valemount mean more families will have access to this vital service, allowing more parents to participate in the community and economy," Conroy added.

The facility is set to be fully accessible, professional development for staff working with children with extra support needs, and it's expected to open in summer 2021.

Through the Childcare BC New Spaces Funding, applications can recieve up to the following amounts:

The Urban Aboriginal Project was announced in February of 2020 and will be built in numerous phases, which will include a daycare. 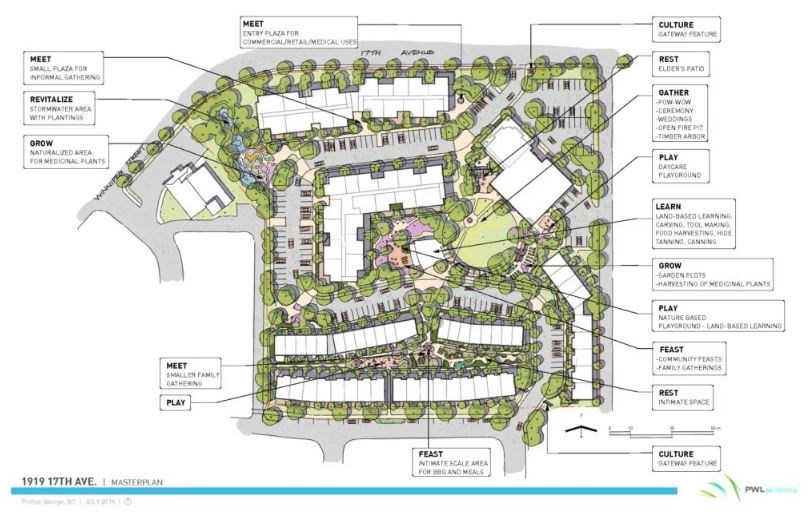 A rendering of the Urban Aboriginal Community project being built at 1919 17th Ave. (via Aboriginal Housing Society of Prince George)