Russell boys back on stage together again

It used to be a regular occurrence to see all three of Judy Russell's sons in the cast of a musical theatre production.
Jul 12, 2019 11:04 PM By: Frank Peebles 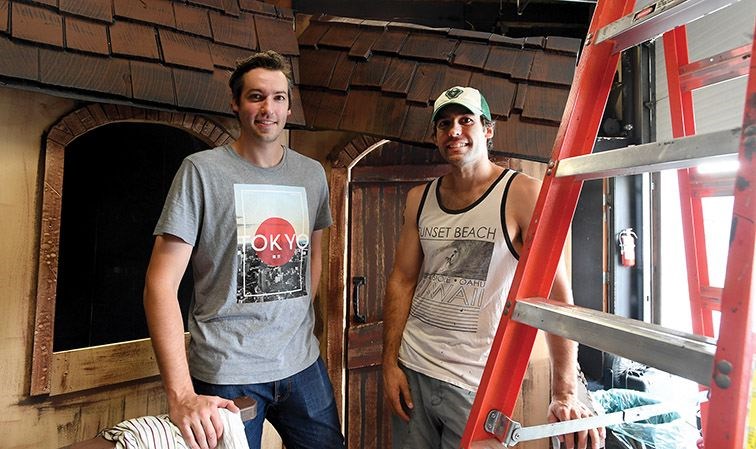 Jon and Matt Russell back stage at the Prince George Playhouse. The three Russell boys are back on stage for the first time in a long while.Brent Braaten, Photographer

It used to be a regular occurrence to see all three of Judy Russell's sons in the cast of a musical theatre production.

The local choreographer-director-producer, and her sets-and-effects husband Bill raised their boys inside theatres and studios and they all took to the stages on which they were brought up.

As adults, though, they have all had their different directions to follow in life, with jobs and marriages and children and other interests to pursue.

But Andrew, Matt and Jon are all converging once again into the cast (and crew) of Beauty & The Beast.

The youngest of the three, Jon, is portraying the title role of The Beast. Although he is heavily involved in the sound, lighting, sets and other backstage elements of recent Judy Russell productions, he hasn't had a part to play on stage since Spamalot in 2014.

"I didn't even know what part I was going to get, I just went into it wanting to get back on stage again, it had been long enough and I was feeling that pull," said Jon. "And I get to be a baritone, which is rare. Characters like this tend to be for tenors, so I love that I get this really lovely song and it's a baritone solo."

Jon observed that Belle is the only true lead character in the show, despite The Beast being in the title. "In true Disney fashion, there are like six subplots all interwoven, so Matt's character has as much stage time as I do, really, or close to it," he said.

Matt, the middle of the three, plays Gaston, the loutish ladies' man who overzealously fixates on Belle. Matt has been the most consistently active of the three on stage in recent years, playing starring parts like Capt. Von Trapp in The Sound of Music and Ash in Evil Dead: The Musical, but also supporting roles in other productions.

"Gaston is definitely a larger part than the one I had in Legally Blonde," Matt said. "There is some meaty music to this role, there's some comedy to him, but he is essentially a villain and I love that. I've never done a villain before, so I'm loving that."

Andrew spotted that all three of them were portraying villains, in a way. The Beast starts out as the chief antagonist of the show before his personality transforms. Gaston is a brute from start to finish. His own character, Monsieur Dark, "has his personality right in his name, and who doesn't like to be the bad guy? It's fun to be a villain. The last time I got to be a villain was in The Producers (in 2012, portraying flamboyant neo-Nazi Franz Liebkind) and that was so comical. This one is a straight-up Disney caricature bad guy."

Andrew was also in 2013's Evil Dead: The Musical, and the supporting cast of recent stagings of The Nutcracker, but that last time all three were in the same show was that edition of The Producers seven years ago.

"I love working with my brothers. We are very close, always have been, and that has never changed," said Andrew. "It feels great to all be together and to get back into a show, it really does. I'm only disappointed I couldn't do it sooner. It's like getting back on a bike, all the memories coming back and the muscles getting familiar with it again. The passion gets re-ignited. And I never stopped because I didn't want to do it anymore, I just had other commitments, it was a busy time with employment, adulting, just life has other priorities for awhile even if you don't want it to."

In true Russell production fashion, all three (their wives, their friends, the other cast members, etc.) are also involved as much behind the scenes as they are on stage. The times between rehearsals and memorizing lines are spent painting sets, cueing the lights, searching out props, and other practicalities of putting on a theatre show.

"It is true Vaudevillian spirit in action," said Jon. "We don't have an establishment we are beholden to, but then again, that means it's all on us. Someone's got to do it, and we are those someones. That's part of the fear and the reward about live theatre."

These good guys get to be their respective bad guys starting tonight and running to July 27 at the Prince George Playhouse. Tickets to Beauty & The Beast are on sale now at all Central Interior Tickets platforms, or at the door while supplies last.