Alex Mackenzie is trippin' on comedy. The trip will go wherever the sound of laughter might take him.
May 21, 2019 9:49 PM By: Frank Peebles 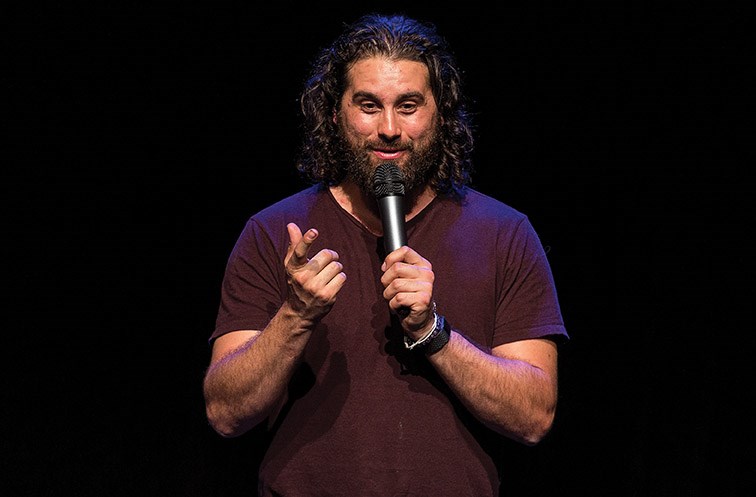 Citizen file photo Comedian Alex Mackenzie performs while hosting the Wheely Funny Fundraiser 2 on May 16 at Theatre Northwest. Mackenzie will headline a show at the Prince George Playhouse on Saturday, which will benefit the P.G. Hospice Society.

Alex Mackenzie is trippin' on comedy.

The trip will go wherever the sound of laughter might take him. With his RV under his butt, and his power engineering and industrial instrumentation certifications in his back pocket should he ever need them, Mackenzie is driving off into the urban wilderness in search of the common Canadian belly-laugher in its natural habitat.

Mackenzie quit a six-figure job at Canfor to embrace this spiritual mission. He's a third generation employee at Prince George Pulp, but he knew he had to strike out on this adventure or he might strike out in life.

"When you tell people you just quit Canfor to be a full-time comedian, they look at you like you just put square tires on your car," said Mackenzie, unfazed and undeterred.

"It's not about money; it's about fulfillment. I can always fall back on my trades but my biggest fear in life is not taking my shots, leaving my potential on the table."

If you've only ever shot hoops in the backyard, then maybe it's stupidly naive to abandon your career for a tryout with the NBA, but if you've climbed the local ranks, the regional ranks and now you're competing in side-games with pro players, then going for the big leagues isn't an opium dream, it's just taking the next logical step.

That's the position in which Mackenzie finds himself.

He remembers his first time on stage the way you never forget the terror of your first roller coaster ride. It was July 2014 at an Alfredo's Pub open mic.

It all happened like a "funny thing happened" joke come to life. He and buddy Mike Stang were hosting a regular podcast. It was called Address This Mess (first episode March 19, 2013). It was a young man's semi-juvenile discussion about current events, sports, popular culture, and just supposin' with a semi-comedic delivery.

"Comedy is the best way to get a message across," Mackenzie said.

"It's when people are the most receptive, even if the topic is a big concept or an unpleasant thought. When people are laughing, it opens their minds to things. The message is the medicine and the comedy is the sugar that helps it go down."

They got a real comedian, The Daily Show's Kevin Bartini, to be a special on-air phone guest one day, and that got the attention of local comedy leader Brian Majore. Majore heard Mackenzie talk about wanting to try comedy out one day, so Majore literally called him on it, and the Alfredo's gig was set up.

Mackenzie loved the adrenaline of fear that so many actors, musicians and standup comedians get hooked on. He built up about seven minutes of material and called on Majore to get back on another stage. This time it was at Nancy O's and this time there was added pressure. Mackenzie was on the undercard of a real professional, part of the opening set for Michelle Shaughnessy.

Shaughnessy didn't order his execution, so he took that to be encouragement.

Veteran funnyman Brett Martin is probably most to blame for Mackenzie's crack(ing jokes) habit. Martin was the first act for whom Mackenzie got the call to be the direct opener while out of town. Mackenzie made the trip to Kamloops, did the show, and Martin responded by openly telling him he had the goods to do it for a living.

That may not have tipped the balance, but on that same trip professional booking agent Drew McLean of Kammerce Promotions also agreed and started getting Mackenzie some additional shows.

Mackenzie also started to get his name requested as an opening act. Veteran comic Simon King has been especially eager to have Mackenzie on stage to warm up his audiences.

"There was a gap where I didn't get on stage for about six months," Mackenzie said, describing yet another incremental step. "I had usually been doing something about once a month, but then Sonar (Comedy & Night Club) opened up and that allowed me to get on stage multiple times a week, and sometimes even multiple times a night. That's when I noticed my comedy really starting to pick up. I also got to meet a lot more pros and start to see the details about how this is a viable career."

Hockey was holding him back, too, but those ties got severed this winter. Mackenzie had been playing senior hockey for the Quesnel Kangaroos (there is presently no Prince George team in the Central Interior Hockey League) "and I always said I would keep playing competitive hockey until they made me leave," he said, and they finally did. When he was finally cut this season, one chapter closed but another opened and it was a lot funnier.

"Sports is for the young," he said, "but comedy you can do forever."

Forever starts on Saturday. Mackenzie will headline a farewell comedy event at the Prince George Playhouse. Local standup veteran Mike McGuire will be the emcee, with featured comedy guests Jon White and Cody Malbeuf also on the bill.

Tickets are $25. Partial proceeds to PG Hospice Society and some will fill up Mackenzie's RV fuel tank, because he's leaving the city after this Wish Me Luck Show as he departs on a project he's calling An Experiment Called Life - a comedy road trip with no fixed end date.