Beauty & The Beast a beauty of a show 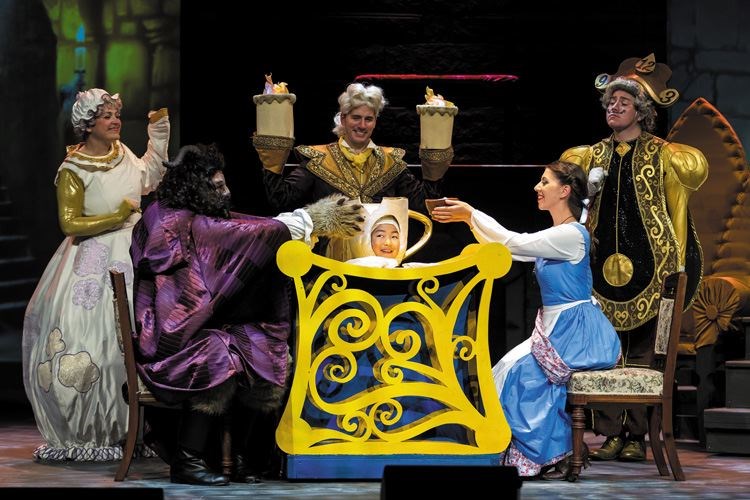 The cast of Judy Russels production of Beauty & The Beast runs until July 27 at the P.G. Playhouse.Citizen photo by James Doyle

If you think you should see Beauty & The Beast at the P.G. Playhouse, you 'guest' right.

Let's start there, shall we - with Belle. No production of Beauty & The Beast would be able to qualify without a talented frontwoman in the lead role. There are versions of Beauty & The Beast done all over the world every year, and every director in every location wishes they had Kelsey Jewesson to anchor their event. She's all Prince George's. The P.G. stage star can sing, dance, act, and command a spotlight. It's beyond getting the job done, and gets into how I'm ever going to see Belle again and not wish it were Kelsey instead. She is the Belle every steeple wishes they could ring.

Some versions of Beauty & The Beast could stop there and still feel OK charging money for tickets, but director Judy Russell had much more to work with. There isn't a weak link in this chain, not a sour berry in this buffet of sights and songs.

For the pivotal role of Lumiere (Disney got the quintessential Jerry Orbach to do it in the animated film version), Russell had two aces up her sleeve. Not only is Nigel McInnis a full theatre professional with well developed stage charisma, he also played the part once before when Excalibur Theatre Arts staged it 12 years ago. He may only look like a couple of candles, but McInnis was dynamite. He ignited the sensational number Be Our Guest, but he also carried many a scene inside the enchanted castle.

Another couple of comedically gifted actors with strong timing and confident grasp of character were the hysterically funny Bradley Charles in the role of LeFou (his performance was dominant during the showstopping song Gaston) and Franco Celli as Cogsworth. These are sometimes the roles that go to actors more eager than studied, but in the hands of Charles and Celli, the show was instead a breakthrough.

Even what one might call smaller roles were filled by actors who didn't show a crack, even when the name was Chip. The little teacup was performed by alternating child actors Andrew Lee and Addison Liu and both are interchangeably cute and already showing their talent.

Kathy Pereira was hot as Mrs. Potts, Catherine Higgins was oooo la la as Babette, Andrew Russell was dark as Monsieur D'Arque, Gary Chappel was paternally evocative as Maurice, and Sharon MacDermott will blow your drawers off as Madame de la Grande Bouche.

No Beauty & The Beast would be complete without the two leading men of the cast. Both are louts and insufferable, possessive, violent bullies at the beginning. One of them, Gaston, embraces this personality with beer-swilling gusto. Matt Russell is such a flexible actor he owns this part, and he definitely puts the flex in flexible. We have seen him many times before in local productions, and he is always an asset to any show.

Making other choices, and changing with the input of new information and experiences, is The Beast.

Demonstrating the hope for male humanity is this ghastly creature inside we men that can, with the right guidance, come out to shine and be an egalitarian ally of women, employees, the elderly - gosh, who else does he initially torment.

It's a role that demands nuanced acting, not to mention a rich baritone singing voice. For that, the city gets the surprise of Jon Russell. This is the best singing in Prince George that Prince George has never heard before. He has been in many past productions, but this was an especially prominent role, and he unfurls a voice we in the audience have never been treated to until now. It is a diamond in this glittering showcase of local talent that would sell just as many tickets were they to uproot this show to any other city in Canada.

It's worth noting that the sets are also a ballet of structure. The designers have triumphed in the way walls and staircases swing and unfold to reveal different facades depending on the scene.

There are also special effects to marvel at, like a silent film clip projected onto a wall, and most notably like the transformation scene that will leave you stunned and amazed as The Beast becomes The Prince in a tempest of shadows and light.

In so-doing he bucks the Disney trend.

Instead of the princess coveting the handsome prince, here we have the ultra-male prince striving for the love of someone known especially for her individual and nonconformist traits.

Beauty & The Beast is on at the Prince George Playhouse until July 27. Tickets are being snapped up quickly from Central Interior Tickets outlets.