Barber of Seville hits the stage

The operatic fur is flying. Theatre North West has been transformed into a barber shop - one of the most famous barber shops of all time, at least to the ear.
Jul 15, 2016 10:32 PM By: Frank Peebles 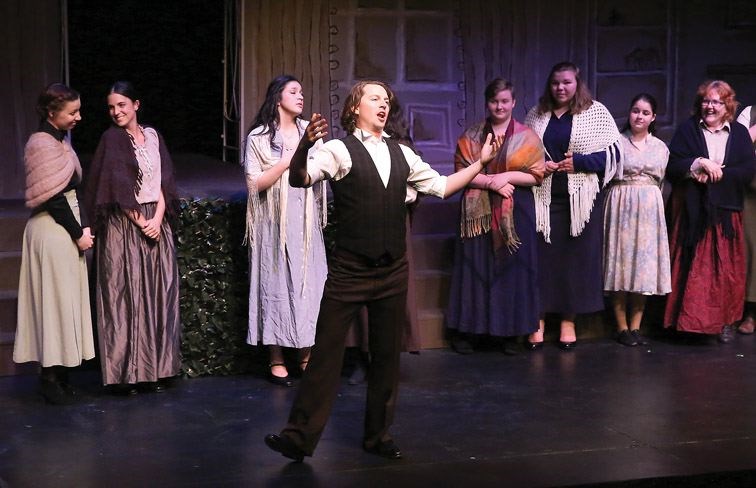 Jason Klippenstein, as Figaro, sings during a dress rehearsal of The Barber of Seville on Tuesday at Theatre North West. Fraser Lyric Opera's production of the Rossini comedy takes place this Friday and Saturday at 7:30 p.m. at Theatre North West, with a matinee showing Sunday afternoon at 2 p.m.James Doyle, Photographer

The operatic fur is flying. Theatre North West has been transformed into a barber shop - one of the most famous barber shops of all time, at least to the ear. The music of classic opera The Barber of Seville is among the most recognizable in human history, but rarely in small towns or even small cities is it ever seen in full performance. Fraser Lyric Opera Society, led by local opera singer and choral director Melanie Nicol, is giving audiences here that rare opportunity.

The Barber of Seville opened Friday night. It is on again tonight at 7:30 p.m. and Sunday at 2 p.m. It stars a mixed cast of imported professionals and local talent.

"You (Prince George) are very lucky to have Mel, and I am also very lucky you guys have Mel," said professional bass-baritone Ian Fundytus who plays the pivotal role of Dr. Bartolo. "This is an amazing opportunity for all of us to do one of the great operas. We are all thankful that Prince George has this new organization going that is giving us a chance to sing."

Fundytus complimented Nicol and the organization team on its casting choices. The talent is strong, he said, so the audience gets full operatic value, but behind the scenes it is a well-meshed cast and crew.

"There are no cast conflicts. I am so excited to see everyone every day. That helps the work part of it," he said.

Nicol agreed, saying there was a technical delay at a recent rehearsal that caused some unexpected down time. So what did the bored cast do? They sang. When they could have been reading or checking emails or twiddling their thumbs, they clustered up around the piano. "It was like opera karaoke," she laughed. It spoke to the easygoing and gung-ho nature of those involved.

Some of the singers are only beginning to get their performance feet under them. Makayla Lansall just graduated from College Heights secondary school.

She has been an aspiring singer since childhood, but now she gets to be directly involved in staging a major opera production.

"It is a lot of hard work, but I know I'm making the right choice about wanting this for my profession because it has been so much fun. No matter how exhausting it might be, I'm looking forward to every rehearsal," she said.

"It's a world of make-believe," said Nicol, echoing Lansall's pure enthusiasm. "You get to put on costumes, sing, goof around, pretend to be other people, do it with others who like it just as much as you do. What's not to like? Everyone should love their job this much."

"I don't think my inner child ever grew up," said Fundytus. "He actually gets to come out and play quite a lot."

For him, that sense of play began when, like every northern Alberta kid, he dreamed of playing for the Oilers, but understood early on that he wasn't a proficient skater.

What caused a similar burn of interest, he discovered, was musical theatre. He loved watching Andrew Lloyd Webber's Aspects of Love, in particular, and went on to study first trumpet then, when he received some chance encouragement from a professor at the University of Lethbridge, switched to voice. It is now his profession.

Seeing local talent in supporting roles and comprising an entire chorus is exciting to Fundytus, because, he said, he would have thrived on such opportunities in his youth.

"Young up-and-coming singers or singers who had that professional quality but chose other paths in life, those people have a place in a production like this, and that's so important," he said.

"You get a community of singers motivated to take part in the production, involved in the genre and it shows your whole community what opera has to offer. Opera is on a big comeback, there is a lot of energy in the opera field right now, and that's because people have discovered the amount of work that goes into it, and the talent it takes, and the great stories it can tell. What this chorus does here in Prince George is just brilliant." He turned to Lansall with his hands outstretched to her, on behalf of all the community members, and said "Really, you sound awesome, it's just amazing to be working with you."

Nicol nodded. "I'm not just a proud choral mamma when I say this: we are going to melt people's faces with the power of our singing. The finale is, just, wow. They just kill it. We all get taken with it and enjoy those moments in the show when it all comes roaring out. We are absolutely proud and excited to give Prince George this experience. All we need now is the audience. We need to feel that laughter. That's the next step after all the rehearsals, is bringing the audience's energy in on it."

Fundytus said social media was offering unprecedented access to opera through platforms like iTunes and YouTube, movie theatres were playing live opera broadcasts on the big screen, and advertising such a multisensory experience was more effective than ever before. Technology allows the public to see opera in better context, as the height of vocal skill, and compare it to pop music that uses only a fraction of those abilities. There is a place for both, he said, but opera's validity is on a much stronger footing now, and it allows a small city like Prince George to have its own opera company.

That's what we love to do, it's what we've been trained to do, and not everyone, not a lot of people, can do what we do, but anyone can be part of the audience and benefit from that. Life is difficult enough. You're supposed to have the ability to go to the theatre and experience different emotions and be moved and get excited and so our job moving forward in this profession is to tell those amazing stories as effectively as possible to modern audiences."

Tickets are available in advance, while supplies last, at Studio 2880.