Statistics show a strong rebound for B.C.’s tourism industry in 2022

As visitors return to Whistler and the rest of the province, the industry's labour force isn't bouncing back quite as quickly.

As visitor numbers trend ever closer to pre-pandemic levels in B.C., its tourism industry’s labour force isn’t recovering at quite the same rate.

“We picked up a lot of momentum after many of the last travel restrictions were lifted in the spring of last year, and that really opened the doors to people wanting to travel,” said Walt Judas, CEO of the Tourism Industry Association of British Columbia (TIABC).

“We saw that particularly on the domestic side—we’re still far behind from where we need to be or want to be on the international front, but we’re getting a lift from international destinations now, too, and anticipate that there may be recovery in ’24, ’25, depending on all kinds of circumstances, including whether a full recession materializes, or whether there are other influences such as inflation or wars or what have you. There are always those variables.”

While operators aren’t “fully confident” 2023 will bring in the kind of numbers recorded in 2019 and the years leading up to the pandemic, Judas said industry stakeholders “have reasons to be optimistic just based on performance in 2022.”

Some sectors within the broader tourism industry “exceeded expectations” in 2022, said Judas, matching or improving their 2019 numbers. “For others, they’re not quite there yet,” he added. “The other consideration is, while domestic visitation has certainly filled in the blanks, it’s not necessarily the case for every single sector within tourism—for example, the meeting sector isn’t quite where it needs to be yet.”

Data from Destination BC’s “Snapshot of BC Travel” dashboard shows Whistler’s hotel occupancy rate hit 68 per cent during the week of Dec. 26, 2022, while the province-wide occupancy rate for the same week sat at 44 per cent.

Whistler’s average daily rate (ADR) for accommodation during the week between Christmas and New Year’s was $984, with revenue per available room (RevPAR) sitting at $665, compared to an ADR of $241 and RevPAR of $106 across the entire province.

Though monthly occupancy statistics for December 2022 weren’t available as of press time, Destination BC statistics listed Whistler’s average hotel occupancy for the previous 11 months at 60.2 per cent, representing a 30-point increase year-over-year. The resort’s occupancy peaked at 73.6 per cent in March 2022—seven months after Canada reopened its borders to Americans—before bottoming out at 38.9 per cent in November. In 2019, Whistler’s average hotel occupancy rate for the year reached an all-time high of 70.1 per cent, with March marking the busiest month that year at 87.5 per cent.

In 2022, "Holiday season visitor levels were similar to those prior to the pandemic," explained Tourism Whistler's president and CEO Barrett Fisher in an email. She said resort occupancy is pacing strong for the coming months, and noted "attractive book-early incentives" prompted many visitors to lock in reservations earlier than usual this year. 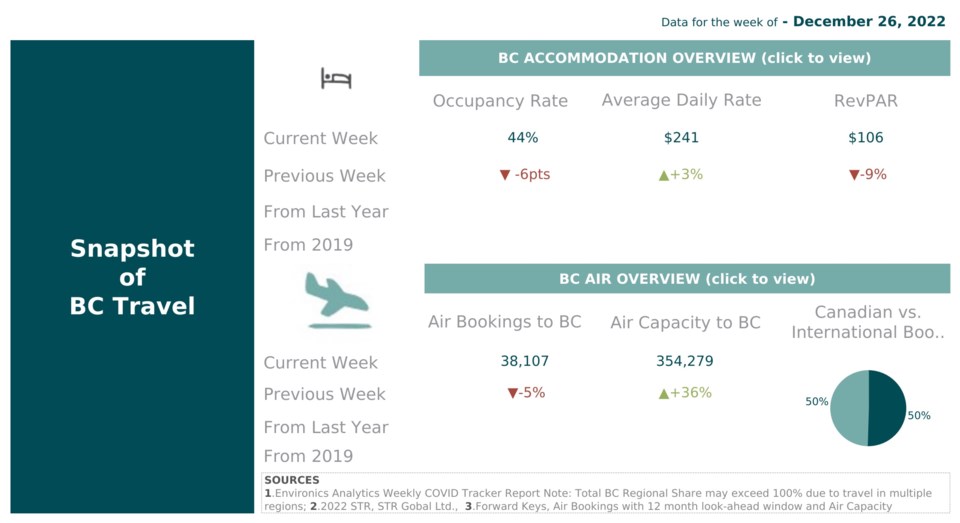 Statistics show B.C.’s hotel occupancy rate for the entire province was 66.6 per cent during the first 11 months of 2022. For a three-year stretch beginning in 2017, the province’s average occupancy rate held steady at 70 per cent, before dropping to 40 per cent in 2020 following the onset of the COVID-19 pandemic.

"Visits from B.C. and domestic Canadian markets continue to be solid, with US and international travellers also returning to Whistler, but not at the levels seen prior to the pandemic," Fisher added. "We are tracking longer lengths of stay from the B.C. market, a decrease in visits over peak periods, and an increase in visits during off-peak and midweek periods—aligning with our strategy to achieve more balanced visitor patterns."

Employers 'know what challenges they're going to face'

As those visitors return to B.C., rebuilding the tourism industry’s labour force after it was decimated by the pandemic is proving to be a more difficult endeavour.

B.C. tourism operators face the same struggles recruiting and retaining staff as employers in other industries, brought on by a high volume of retirements compounded by a lack of secure, affordable housing, said Judas. Some employers are coping by limiting operating capacity, while others are “pulling out all the stops to try to recruit people, and also spending a lot of time and effort to ensure that the employees they do have find every reason to stay with a company or a business,” he added.

Meanwhile, organizations like Go2HR, B.C.’s tourism and hospitality human resource and health and safety association, are working with clients to “change the mindset for employers, to plan and be more strategic so that they’re not under the wire and having to scramble at the last minute,” explained Cindy Conti, Go2HR’s human resources consultant for the Vancouver, Sunshine Coast and Sea to Sky regions. Operators “know they need to plan appropriately,” she added. “If there are challenges with transportation or accommodation, or your employee doesn’t have anywhere to live, it’s not a surprise anymore.”

According to Go2HR’s B.C. Tourism and Hospitality Employment Tracker, employment in the sector reached 335,750 in December 2022, representing a significant jump from the same month in both 2021 and 2020, and a more modest 0.4-per-cent rise from the 334,500 tourism jobs recorded in November 2022. But even with those increases, employment in B.C.’s tourism industry remained below pre-COVID levels, with 16,500 fewer jobs compared to December 2019.

Federal policies are helping, agreed Judas and Conti, like the government’s decision to remove the cap on the number of positions seasonal employers can fill through Canada’s Temporary Foreign Worker (TFW) Program, increasing the number of days TFWs are permitted to work in Canada and ditching the 20-hour-per-week working limit for international students. Still, Judas said more can be done on the immigration front to help bolster the tourism sector.

With in-person events once again the norm, “Generally, my impression is that things have come back,” said Conti.

“Yes, people are still struggling with that the labour force, but ... in terms of bouncing back, they’re busy, but a lot of them are almost more prepared than they were in the past because they know what challenges they’re going to face. I just spoke to an employer [who works with tour guides] who’s already kind of preparing for summer, and has started to chat with some of the schools.”