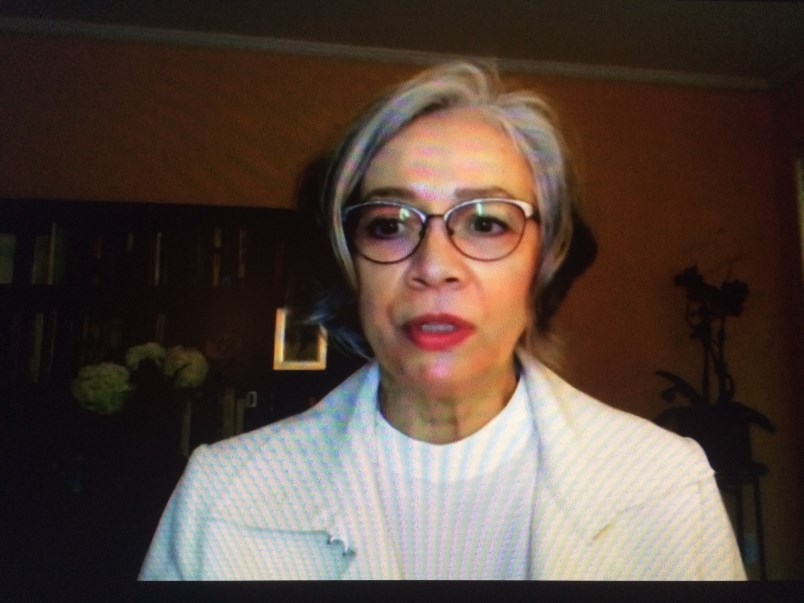 Jennifer Whiteside takes her oath of office, virtually, as she's sworn in as the new Minister of Education for British Columbia. (via Screenshot)

New Westminster just got a voice at the cabinet table - and it's a major voice.

Jennifer Whiteside, the rookie NDP MLA just elected in October following the retirement of former New Westminster MLA Judy Darcy, has been sworn in as the minister of education in Premier John Horgan's new cabinet.

She replaces outgoing minister Rob Fleming at a hot-button time for the education portfolio, with COVID-19 numbers surging and calls growing for further action in schools.

Fleming remains in cabinet but has moved to the transportation and infrastructure portfolio. Among other major cabinet posts, Adrian Dix remains minister of health. Selina Robinson, MLA for Coquitlam-Maillardville, takes on the finance portfolio, while David Eby (MLA, Vancouver-Point Grey) remains attorney general and adds housing to his responsibilities. (See a full list of cabinet portfolios below.)

The swearing-in took place largely virtually, with Horgan and Lt.-Gov. Janet Austin on hand in Victoria, while MLAs took their oaths of office from their own homes.

The cabinet includes 20 ministers and four ministers of state, with gender representation balanced 12-12. The cabinet will be supported by 13 parliamentary secretaries.

Newly named school board chair Gurveen Dhaliwal has already tweeted out her congratulations to Whiteside, as have other members of the New Westminster school board:

Big congratulations to @JM_Whiteside on becoming our new Minister of Education! Such exciting news! Looking forward to working with her on behalf of @newwestschools

Congratulations @JM_Whiteside on your appointment to BC education minister. Exciting news! Looking forward to working with you and your ministry moving forward. #bced

Congratulations to New West MLA @JM_Whiteside on being named Minister of Education! I look forward to seeing the work she is able to do with this amazing portfolio for all BC students. @BCSTA_News

The B.C. Teachers' Federation, which has been lobbying hard for more action to keep schools safe, has also chimed in:

Congratulations Jennifer Whiteside and welcome to #bced as the new Minister of Education. Minister Whiteside is the new MLA for New Westminster. Before becoming an MLA, @JM_Whiteside served as the secretary-business manager and chief spokesperson of the Hospital Employees’ Union

The full list of cabinet ministers is as follows: