The 'do more' message could have been improved, says psychology professor
Jan 27, 2021 9:25 AM By: Roxanne Egan-Elliott / Times Colonist 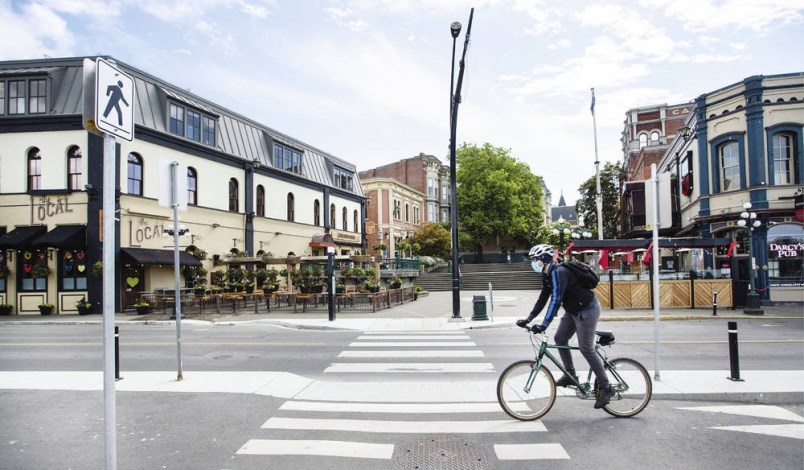 A masked cyclist rides along on Wharf Street in Victoria.Darren Stone / Times Colonist

At Monday’s COVID-19 update, provincial health officer Dr. Bonnie Henry called on British Columbians to “do more” to bend the province’s curve of new daily cases. The request had some people feeling frustrated, wondering what more they could be doing.

B.C. Greens Leader Sonia Furstenau took to Twitter to say she believes the vast majority of people are “doing literally ­everything they can” and, judging by the reaction — nearly 1,000 likes, almost 300 retweets and dozens of comments sharing the sentiment — many are feeling like their efforts are already maxed out.

Furstenau said in an interview most British Columbians have given up seeing their family and friends, attending funerals to say goodbye to loved ones, meeting newborn babies and enjoying favourite hobbies. They’ve abstained from ­religious gatherings and sacrificed a traditional Christmas or winter holiday.

Instead, it should be the government doing more, she said, especially given the heightened concern around new variants of the virus brought to the province through international travel.

Furstenau said there’s “a long list” of changes that British Columbians have been asking for, including mandatory masks and better ventilation in schools, travel restrictions instead of recommendations, paid sick days for essential workers and more transparency around where COVID-19 clusters are occurring.

Premier John Horgan said last week the province wouldn’t ban travellers from going in and out of the province after ­undertaking a legal review that suggested the bulk of travel was for work and therefore protected under the Charter of Rights and Freedoms.

Prime Minister Justin Trudeau has warned that new travel measures are coming and said any Canadians planning a trip should cancel it.

Frederick Grouzet, an associate professor of psychology at the University of Victoria, said the “do more” message is not necessarily the wrong approach to reach people, but it could have been improved by including examples of ways people who are already following health orders can extend themselves further.

Doing more could mean sharing updates with people around you who may not be paying as much attention, encouraging them to avoid risky activities or supporting people who are struggling to follow restrictions, he said.

The key to having a productive conversation around restrictions is to listen to the other person and show that you understand their ­perspective, said Grouzet, who studies human motivation and ­messaging.

After establishing a good connection, try to explain why it would be beneficial for the person to change their behaviour, not just for themselves, but for others.

“It’s important to not try to impose on the other person what to do, to tell them what to do,” he said.

“This is what could create some conflicts … people could be very defensive.”

Showing compassion to those who appear to be doing less than you and giving strangers the benefit of the doubt is another way to do more, he said.

For example, he said if you see someone who is not wearing a mask, recognize they could have a valid reason. “So rather than automatically blaming them, it’s good to understand them.”

Grouzet said while many people are following the rules, there are certainly people who could do more.

“For the few who have chosen to put aside the public health precautions we all need to follow and make exceptions for themselves, now is your time to join or rejoin us in our efforts. It is never too late to be a part of the team who is making a difference every day across our province,” they said.

Zhenyi Li, a professor at Royal Roads University and director of the School of Communication and Culture, said messaging about health issues is one of the most difficult areas of communication.