The unlikely alliance  includes 25 organizations, representing around 275,000 British Columbians and over 900 businesses — and new members continue to join  the ranks.
Jun 12, 2021 5:42 AM By: Matt Simmons, Local Journalism Initiative Reporter/The Narwhal 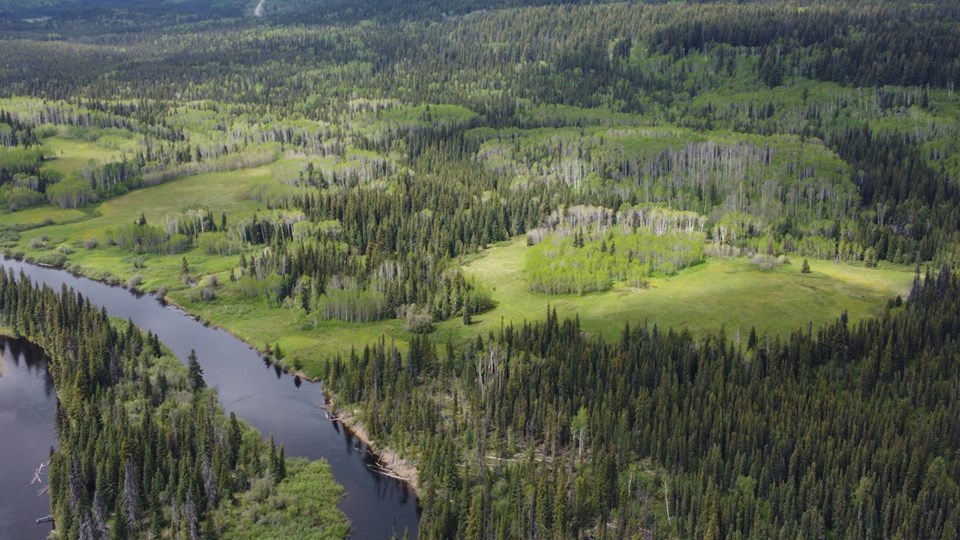 Drone footage of the grasslands of the Tl'o Ba Wildlife Habitat Area.Tl'azt'en Nation

As B.C.’s landscapes are fragmented by industrial activities and the province faces biodiversity collapse, with more than 2,000 species at risk of extinction, guide outfitters, hunters, fishers and trappers are standing  shoulder-to-shoulder with naturalists, ecotourism operators and  conservation organizations in a new coalition calling on the province to protect B.C.’s ecosystems before it’s too late.

The Fish, Wildlife and Habitat Coalition  launched in May with the hope that the diversity of its members will  force the province to listen and take action. The unlikely alliance  includes 25 organizations, representing around 275,000 British Columbians and over 900 businesses — and new members continue to join  the ranks.

“Within the coalition, there’s a  recognition or consensus that we’re losing these values in British  Columbia,” Jesse Zeman, director of fish and wildlife restoration at the  B.C. Wildlife Federation, told The Narwhal in an interview. “We’re at a  fork in the trail: one [path] is the status quo, which will ensure that  we end up with more ecosystems and fish and wildlife populations that  move towards endangered, extirpated and extinction, and the other is  where we jointly advocate…to drive positive change for those values.”

Tim Burkhart, of the Yellowstone to Yukon  Conservation Initiative, said he’s not surprised so many groups and  organizations have signed on.

“I think what we’ve seen is that  stakeholders from across all sorts of different sectors are losing or  have completely lost faith with the province,” he said in an interview,  noting the province’s failure to act on its promise to implement the  recommendations of the 2020 Old-Growth Strategic Review  as a timely example. One of the key recommendations said the province  should immediately defer logging old-growth in ecosystems facing  irreversible biodiversity loss.

“They’ve had plenty of time and there has  been no meaningful change to the status quo of destroying old-growth, no  deferrals, and it’s just not acceptable anymore.”

The ongoing conflict at Caycuse and Fairy Creek  on Vancouver Island, where more than 100 protestors have been arrested  while trying to prevent logging of old-growth forest, is indicative of  how provincial policies put ecosystem values at odds with economic  interests.

“You’d think that we should be taking care  of fish, wildlife and habitat first, and operating industry and  resource extraction within those constraints — but we’re not,” Zeman  said.

The Narwhal requested an interview with Premier John Horgan but did not receive a response prior to publication.

‘We align on almost every concern’

Scott Ellis, executive director of the  Guide Outfitters Association of B.C., said it wasn’t easy to convince  his membership and board of directors to join forces with organizations  that are anti-hunting. He told The Narwhal in an interview he was  surprised to discover how many issues the groups agreed on.

“It probably sounds corny but it warms my  heart a little bit that we have so much alignment,” he said. “If we can  come together as unlikely allies, I think government should be like,  ‘Holy shit, we need to pay attention.’ ”

“I didn’t see a bunch of pottery-making,  marijuana-growing, tie-dye-wearing, dreadlocked freaks and hopefully  they didn’t see a bunch of trophy-hunting, beer-drinking knuckle  draggers,” he said. “We align on almost every concern about our water,  our forest, our harvest rates, about climate change concerns, our fish  populations [and] our wildlife populations.”

Ellis credited Zeman for keeping the conversation going and setting up a framework to ensure members agree to  put aside their differences and focus on those alignments.

Katherine MacRae, executive director of  the Commercial Bear Viewing Association of B.C., told The Narwhal she  has worked with the Guide Outfitters Association on other initiatives  and is hopeful this coalition will have a positive impact.

“We never speak about wildlife management  or bear viewing or grizzly bear hunting or anything like that — we leave  that at the door,” she said in an interview. “Ultimately, it’s habitat management in British Columbia that is failing right now and if we can join forces to make the voice stronger, then we want to be a part of it.”

Burkhart described the alliance as “unlikely bedfellows” and said he believes the coalition has great potential.

“There might be challenges and challenging  conversations but by focusing on what unites us, I think it’s a really  empowering step to take.”

Coalition calls on the province to create a vision for fish, wildlife and habitat

The coalition is asking the province to  prioritize fish, wildlife and habitat through legislation and regulation  and commit to using independent science to inform its decisions. It is  also advocating for increased funding for protection and a new  governance model to support restoration and conservation efforts, all in  partnership with First Nations.

Zeman said it’s vital that the province  first establish a clear vision for what protection looks like, and then  back that vision up with appropriate regulatory tools.

“We need to have a goal for what we want  B.C. to look like 50 years down the road,” he said. “We know what it  looks like without a goal, because we have no salmon in the Fraser  River, endangered steelhead [and] endangered caribou. We cannot continue  to repeat those same mistakes.”

Burkhart said B.C. has many opportunities to live up to its promises, such as enacting provincial species-at-risk legislation which it committed to doing after the 2017 election, but agreed that  landscape-level solutions have to start with the big-picture vision.

“There are many ways in which [the  province] can take action right now,” he said. “We want to see that  vision articulated and put into action, and we’re going to be there to  hold them to account. We don’t need campaign commitments — we need  action on the ground.”

He added that the province has an opportunity to show the world a better way of balancing industry and conservation.

“With our incredible biodiversity and  incredible natural values, B.C. should be a global leader in  conservation,” he said. “Instead, we’re falling way behind as species  wink out and different caribou herds go extinct  and more and more habitat is lost across the province with zero vision  for what fish, wildlife and habitat could look like in British  Columbia.”

While the coalition is focused on pushing  the province to create that big-picture vision, it is also looking at  leveraging amendments to existing legislation, such as the Forest and  Range Practices Act.

“When we talk about the forestry industry,  a big industry that employs lots of British Columbians [and] brings a  lot of economic value to this province, we’re not asking for it to  stop,” MacRae said. “We’re asking for different value guidelines to be  added into the forestry act.”

She explains that the value of tourism,  for example, is not considered in any forestry-related decisions, adding  that adventure tourism alone is a $3.2 billion industry.

“At what point are we going to look and say that there are other values in this province that need to be considered?”

Ellis agreed and said he believes the  forest industry can coexist with habitat protection, but warned there  will be more conflicts unless the province acts quickly to implement  significant change.

“Let’s do a better job. Let’s deactivate  some roads, let’s plant some deciduous [trees], let’s have a kind of  mosaic of tree species out there.”

He added he’s been unsuccessfully advocating for change in how the province manages B.C.’s forests for over a decade.

“Government doesn’t care, doesn’t listen,”  he said. “Or if they listen, they just blow it off. And it is  regardless of government — green, orange or red, we’ve talked to them  all.”

The Ministry of Forests, Lands, Natural  Resource Operations and Rural Development declined requests for an  interview and the Ministry of Environment and Climate Change Strategy  was unable to provide an interview prior to publication.

B.C.’s cultural identity is intertwined with the natural world

Zeman said the members of the coalition  are coordinating how best to work together and to ensure growth is  sustainable. The next step is to start actively engaging with the  province, and later the federal government as well.

If B.C. continues to lose species and its  landscapes are increasingly fractured, Burkhart said there will be  far-reaching impacts, not only in the natural world but also to the  province’s cultural identity.

“The tourism slogans, ‘Beautiful British  Columbia’ and ‘Super, Natural B.C.’ aren’t going to hold up for long if  we keep seeing all the habitat disappear, and more and more species on the brink.”