Declines in Fraser River sockeye are a major concern for the commercial fishing sector in B.C.
Jun 8, 2021 12:38 PM By: Nelson Bennett 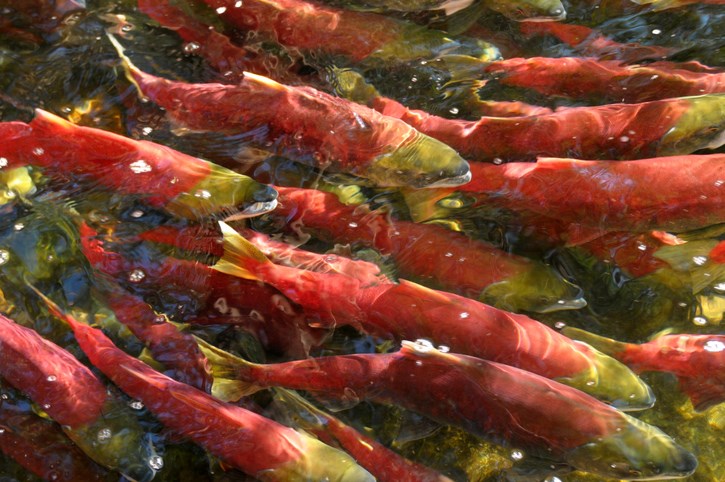 Pacific salmon in decline, not just in B.C., but globally, according to recent catch dataBirdimages

The Canadian government will spend $647 million over five years on a Pacific salmon strategy that includes the building of two new hatcheries, increased conservation measures, habitat enhancement and "harvesting transformation."

The announcement came one day after the North Pacific Anadromous Fish Commission (NPAFC) released data that showed global Pacific salmon abundance in 2020 was the lowest in more than 40 years.

While recent NPAFC data suggests there has been a recent system-wide decline in salmon abundance, the declines have been most pronounced in the southern ranges – from California to B.C. – and in certain species, like chinook.

For B.C., declines in Fraser River sockeye are a major concern for the commercial fishing sector.

"A generation of Canadians have seen salmon populations decline, some up to 90% in their lifetime,"Fisheries and Oceans Minister Bernadette Jordan said in a press conference Tuesday.

She and her parliamentary secretary, Terry Beech, announced the Pacific salmon strategy will have four pillars:

"The strategy will be a massive undertaking, unlike anything before," Jordan said.
The plan includes building two new hatcheries and enhancing production at existing ones.

In 2019, a record number of salmon from hatcheries – 5.5 billion – were introduced into the Pacific Ocean, according to the NPAFC. B.C. introduced a mere 384,404 salmon through hatcheries, compared with roughly 2 billion each from Japan and the U.S., and 1.2 billion from Russia.

Asked if the new strategy has a target in terms of the number of salmon that will be produced through Canadian hatcheries, Jordan said there were no specific production targets.

She was also asked if the plan to increase hatchery fish production would include increased marking. This is particularly important to the sport fishery.

Recreational fishers have been pushing for a more aggressive marked selective fishery, which would involve clipping the adipose fin on hatchery fish. This would allow sport fishers to retain marked hatchery fish. It would also allow for better brood management of wild stocks, since the markings would allow fisheries managers to distinguish between natural wild stocks and hatchery stock.

But asked if the plan announced today includes a more aggressive marking program, Jordan was non-committal.

"We're going to continue to have conversations with our rec fishers," she said. "We know how important this is to them. I'm not adverse to a marked selective fishery. But I do want to make sure that we have the right science in place. With this strategy today, more fish means more opportunities and that's what we're working towards."

She added the two new hatcheries that her government plans to finance would be aimed at strategically enhancing stocks that are most in need of enhancement.

"Releasing hatchery fish has to be done in a strategic way to enhance the populations that are in decline," Jordan said. "The idea is not to overwhelm the wild Pacific salmon stock – it's to enhance them."

"This is a cyclical species that will require multiple reproductive cycles to recover," she said.