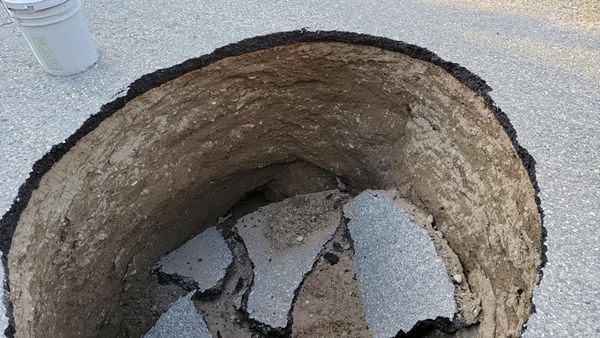 You could say it was the pothole from hell… or to hell, considering how deep it was.

Stephen Davies was coming home from his job in sales at Chemo RV in Quesnel on Friday evening when he came around a corner on Blackwater Road and saw a truck blocking the road.

Davies recognized the driver of the truck as Doug Paley, a fellow firefighter with the Bouchi Lake Volunteer Fire Department, and he stopped and got out of his car. That’s when Davies saw the sinkhole he described as six feet wide, nine feet long and nine feet deep taking up most of the lane he had been traveling in.

“When I came around the blind corner (Paley) was there and lucky he was there because I would have gone right into it and my car would have been buried inside,” said the 48-year-old Davies. “That’s how big it was.

“It was a surprise. I’m glad someone was there because I would have lost my car. I have a little Ford Fiesta and the size of the hole, it would have fit in it perfectly, and you wouldn’t have seen me. Thank God for Doug. He had his truck parked across the road with his pylons out.”

The road connects Prince George to Quesnel and the section of Blackwater where it happened is just before the Rawlings Road turnoff, about 20 minutes northwest of downtown Quesnel.

Paley works on a road crew for Emcon Services, the highway maintenance contractor that serves the Quesnel area, and it was later discovered there were two culverts running under that section of the road and one of which had collapsed, allowing all the material holding the road in place to wash away. The hole was filled with a load of blast rock and topped with pit run and crushed rock to provide a temporary fix that will be repaved later.

“They actually fixed it pretty quick,” said Davies. “On the way to work this morning at 7 o’clock they’d filled it in with dirt and they had a front-end loader just sitting there because they knew it would start compacting.

Davies posted a video of the sinkhole on his Facebook site and one of the comments it drew was from someone who knows of another driver who hit the hole Friday, just before it completely collapsed.

Hunters join forces with conservationists to call for fish and wildlife habitat protection
Jun 12, 2021 5:42 AM
Comments