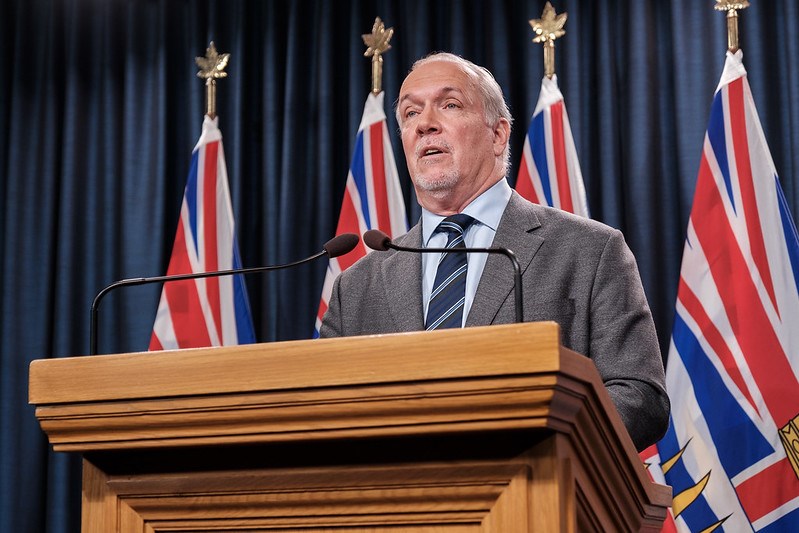 Premier John Horgan speaks to the media on Nov. 18, 2020. Horgan addressed the issue of a B.C.-wide travel ban, in light of a recent surge in coronavirus (COVID-19) cases across the province. (via Flickr/Province of B.C.)

B.C. Premier John Horgan's new cabinet relies on some familiar faces in key positions with Adrian Dix remaining in health, while giving the task of guiding the economy through the COVID-19 pandemic to Selina Robinson with her appointment as finance minister.

Robinson was previously the minister of municipal affairs and housing.

The premier has kept some of his most senior ministers in their previous cabinet posts, including Mike Farnworth as solicitor general and David Eby as attorney general, but with the added responsibility of housing.

Three former MPs were handed cabinet posts, with Murray Rankin being named Indigenous relations and reconciliation minister; Nathan Cullen as minister of state for lands, natural resource operations; and Sheila Malcolmson, who served in the last legislature after leaving federal politics, becoming the minister of mental health and addictions.

Among the other newcomers to cabinet are Mitzi Dean as children and family development minister; former Tofino mayor Josie Osbourne at municipal affairs; and Jennifer Whiteside in education.

Horgan was with Lt.-Gov. Janet Austin at the University of Victoria for the swearing-in ceremony, while all ministers, except Eby, were sworn in virtually.

“Those sworn in today reflect the diversity and dynamism and resilience of B.C. Joining me at the cabinet table are 24 individuals, 12 men and 12 women. Each one of them committed to making sure we leave B.C. better than we found it by focusing on the enormous potential of all British Columbians."

The premier said families across B.C. are struggling with the burdens of a pandemic now in its ninth month with little chance of that receding in the short term.

"But we are buoyed by the good news of vaccines on the way, but until then, we have to continue to do our level best to keep the second wave of COVID-19 under control and prepare for the new year."

Horgan's cabinet unveiling comes after the NDP won a majority government in last month's election, capturing 57 of the 87 seats in B.C.'s legislature.

Horgan has recalled the legislature for a brief session with a throne speech Dec. 7.