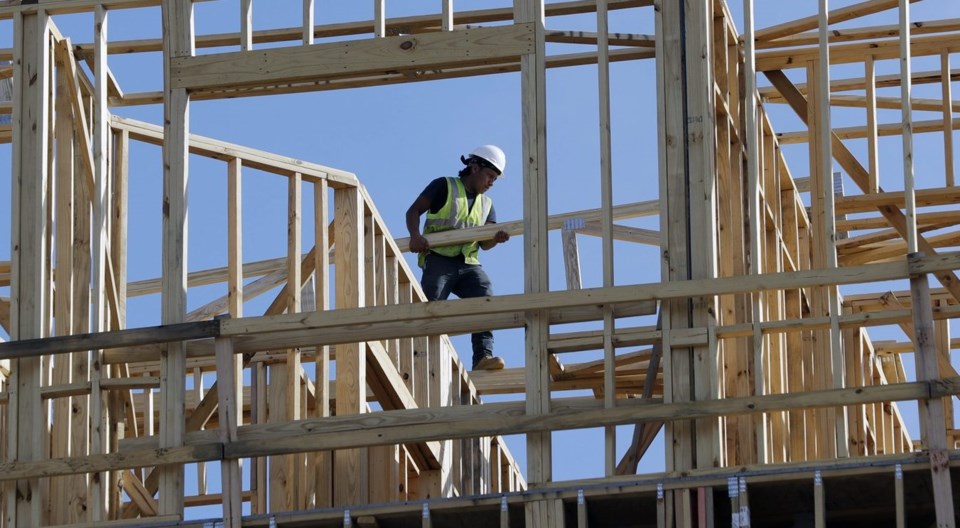 British Columbia employment grew by nearly 55,000 in September, up 2.3 per cent from a month earlier for the fifth consecutive monthly increase, but construction workers did not share in the uplift, according to Statistics Canada.

Construction employment slumped sharply by 6.8 per cent or 14,600 persons from August and was down 17 per cent from pre-pandemic February.

A key reason is a steep decline in B.C. housing start. Annualized urban-area housing starts fell to 30,670 in September, compared to a pace of 41,530 units in August, Canada Mortgage and Housing Corp. (CMHC) reports.

Housing starts declined about 25 per cent in Metro Vancouver and Abbotsford-Mission, 60 per cent in Kelowna and 14 per cent in Victoria, the federal housing agency noted, compared to a month earlier.

However, units under construction remain elevated with 60,270 units at various stages of completion. This is down 3.4 per cent from a year ago, but marks a historically high level due to the complexity of multi-family projects being built and strong pace of starts last year, according to CMHC. Nearly three quarters of units being built are in Metro Vancouver.

Construction aside, B.C.’s labour market performance was surprisingly strong in September, according to Central 1 Credit Union, and led all western provinces.

September’s job growth followed a 0.6 per cent gain in August and outpaced the national increase of 2.1 per cent

“With the latest gain, the gap from pre-pandemic February employment narrowed to 3.7 per cent or fewer than 100,000 persons. At the height of pandemic-induced economic restrictions, nearly 400,000 jobs were lost,” said Bryan Yu, deputy chief economist at Central 1 Credit Union.

B.C.’s unemployment rate fell sharply by 2.3 percentage points from 10.7 per cent in August to 8.4 per cent in September.

“Despite the better-than-expected rebound, a slower phase of hiring is expected if not an outright stall. Hospitality sectors face an uncertain fall as the weather turns, and a lack of events and conferences will further impact this sector. Rising COVID-19 caseloads could also scale back return to work and a broader economic recovery,” Yu noted.

Saskatchewan’s unemployment rate in September was 6.8 per cent, down 1.1 per cent from a month earlier.

In Manitoba, employment increased for the fifth consecutive month, up 15,000 in September, while the unemployment rate fell 1.1 percentage point from August to seven per cent, Statistics Canada reports.