Bausch Health Companies Inc. is preparing to spin off its eyecare business this fall while also considering suitable alternatives including a sale of the business, the company's CEO said Tuesday. "We have a value in our mind for that business.
May 4, 2021 11:24 AM By: The Canadian Press 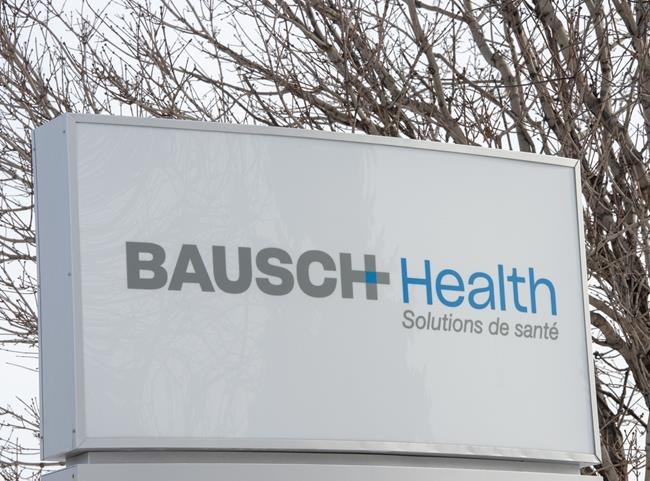 Bausch Health Companies Inc. is preparing to spin off its eyecare business this fall while also considering suitable alternatives including a sale of the business, the company's CEO said Tuesday.

"We have a value in our mind for that business. But if there are others that want to pay a price that is equivalent to that value, we're always going to do what we believe is the right thing to do for our shareholders and evaluate that those types of offers," chairman and CEO Joseph Papa told analysts during a conference call about Bausch Health's first quarter report.

He added that the company has a pathway to spin off Bausch and Lomb sometime after October but will always be open to other alternatives or pathways that create value for shareholders.

The Quebec-based company announced that Papa will head the new eyecare business while Sam Eldessouky will become chief financial officer with Paul Herendeen's departure from the role on May 31 to become special adviser to the chairman.

A new leadership team will be selected in the coming couple of months to run the remaining part of the business, referred to as Bausch Pharma until it is rebranded.

Both companies will remain domiciled in Canada and will have corporate offices in Bridgewater, N.J. It also plans to apply to list Bausch and Lomb on the Toronto and New York stock exchanges, where the overall company is currently listed.

"We believe that both B&L and Bausch Pharma have the ability to grow revenue organically in the mid-single digits for a number of years," Herendeen said.

"Looking ahead, our process remains on execution, growth and positioning these two strong but dissimilar businesses for attractive growth and opportunities in the markets they serve."

Bausch reported a first-quarter loss of US$610 million compared with a loss of US$152 million a year earlier.

Revenue for the quarter totalled nearly US$2.03 billion compared with US$2.01 billion in the first quarter of 2020. It sustained a negative impact from COVID-19 of about US$100 million.

"Overall, our team has been able to adapt to the pandemic related challenges and despite a few pockets of variability, recovery is in progress across our business," Papa said.

The eyecare business accounted to 44 per cent of overall revenues of US$881 million, up from US$875 million a year ago.

The company was expected to report an adjusted profit of US$337.9 million on US$2.06 billion of revenues, according the financial data firm Refinitiv.

Bausch Health says excluding the US$33-million favourable impact of foreign exchange and the $10-million impact of divestitures and discontinuations, revenue fell US$8 million compared with a year ago.

"We entered 2021 with strong momentum, and our first quarter results demonstrate that the recovery is in progress. Our business is generating strong cash flows, and our leading products are poised for growth in key markets," added Papa.

The spinoff eyecare business is expected to have net leverage of less than 2.5 times capital invested while the remaining pharma business will have a targeted 6.5 to 6.7 times.

Moody's Investors Service said the target for Bausch Pharma resulting from the spinoff of eyecare is "credit negative for the remaining business" compared to the previous target of 5.5 times.

"Previously, Moody's envisioned that a spinoff represented a more substantial deleveraging opportunity for the remaining business," it said in a news release.

This report by The Canadian Press was first published May 4, 2021.

Companies in this story: (TSX:BHC)

Queen's cousin accused of willingness to sell Kremlin access
May 9, 2021 8:55 AM

Companies offer vaccinated customers freebies and discounts in marketing push
May 9, 2021 7:00 AM