Semiahmoo First Nations chief Harley Chappell says childhood past – including his father being a former member of the Hells Angels – does not define him
Dec 10, 2020 1:16 PM By: Graeme Wood 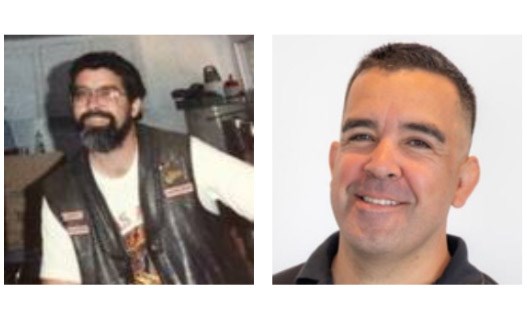 Phillip Chappell as a young man, left, and Harley Chappell. Photo via Facebook

How did B.C. Minister of Public Safety and Solicitor General Mike Farnworth appoint the son of a former Hells Angel to the Surrey Police Board?

That’s the question being asked in Surrey Thursday, after provincially appointed police board member Harley Chappell’s connections to the criminal organization surfaced on social media.

“It makes you wonder about the vetting process when they chose the board,” said Surrey city councillor Jack Hundial, speaking to the provincial government.

“I think it needs to be investigated how close those ties are and that needs to be the determining factor,” said Hundial, who notes the gang controls part of the drug market in the city and had its clubhouse raided last month by Surrey RCMP.

Neither Farnworth nor Chappell have responded to Glacier Media’s inquiries on the matter; however, Chappell provided a statement to the Vancouver Sun Wednesday evening, saying he has “no relationship or association with the Hells Angel club in any way,” and that his father Phillip Chappell left the gang in 1992.

“My childhood experiences do not define me as an adult,” said Chappell, a Semiahmoo First Nations chief. “I have used my life experiences to become the person I am today: a father, a husband, a community leader.”

Chappell attended the funeral of Carla Newman, the mom of his childhood friend, and is photographed with several Hells Angels members, an August 30, 2018, Facebook post shows. The Sun reported one of those members is a convicted drug trafficker.

Chappell also has a photo posted on his Facebook page of his father as a young man in a club leather vest and t-shirt.

It is the attendance of the funeral that most worries Hundial. “So those ties still exist,” he said, adding public perception needs to be factored into any review.

The board did not respond to Glacier Media and only told the Sun that it was the provincial government that appointed Chappell.

Hundial has previously been critical of Farnworth for allowing the city to transition from the Surrey RCMP to the SPS in what he calls a non-transparent and poorly budgeted manner.

Hundial has also questioned whether Farnworth is fulfilling the Police Act by allowing Surrey council to freeze the Surrey RCMP for a third straight year.

The Auditor General of B.C. is an independent body tasked to report on how well government is “managing its responsibilities and resources.”

Hundial said the auditor ought to investigate the entire police transition.

“I think there’s a big responsibility; you’re creating what could be the biggest police force in the province,” Hundial said. “You need to be clearly transparent. Our own premier called it a ‘hornets’ nest.’

“This whole process has been rushed along, so this is just another example. The public has been questioning this process from the onset.”

The board chose Delta Deputy Chief Norm Lipinski as SPS chief last month. At the outset of the formation of SPS, Chappell was to play a significant role in drafting an Indigenous police strategy as the board’s chair of the governance committee, which oversees the board’s governing “philosophies, structures, policies, and processes as well as legal and compliance matters.”

Chappell, according to his online board profile, was a traditional counselor with the Fraser Valley Aboriginal Child and Family Services Society from 2006-16, a justice worker with the Qwiqwestom Alternative Justice Program and an Aboriginal support worker with the Chilliwack school district.