When Bruce Germyn first heard a bang he knew something serious had happened. A then six-year employee, Germyn was working the edger on the west side of the main floor at Lakeland Mills sawmill when, just after the 9:30 p.m.
Mar 5, 2015 10:26 PM By: Mark Nielsen 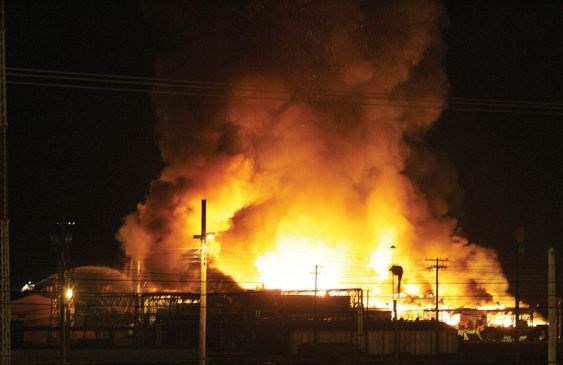 When Bruce Germyn first heard a bang he knew something serious had happened.

A then six-year employee, Germyn was working the edger on the west side of the main floor at Lakeland Mills sawmill when, just after the 9:30 p.m. lunch horn went on the night of April 23, 2012, a massive explosion ripped through the operation.

"I could feel the whole floor and building shaking," Germyn said.

He looked up and saw "curtains of sawdust" raining down from the beams and sprinkler system above.

Then he looked back and saw a fireball coming towards him.

"The only way I can describe it was I went into slow motion and I literally could see the flames flickering and dancing," Germyn told a coroner's inquest on Thursday.

"It was rolling like a ball, it was eating and chewing up the curtains as it was making its way through the mill."

Germyn did not remember what happened after the fire reached him, only that he picked himself up, checked to see if he was on fire - he ended up with burns to roughly 40 per cent of his body - and then got his bearings.

Everything was pitch black and he couldn't figure out which direction to go. But then "it was like a vacuum sucked the smoke" and he saw a route to a crossover conveyor on the plant's south side.

He crawled under it and after some hesitancy about which way to go, took some stairs down to the welders' shop in the basement.

That was where he met up with Greg Chayko, a saw filer who was also on the main floor when the blast occurred.

Chayko had been getting ready to change the saws on the mill's large headrig - used to saw the larger logs into more manageable dimensions - and was waiting for a fellow saw filer.

He was looking south towards some open doors when he heard an odd whoosh, "like some kind of wind."

Chayko turned towards the sound and was facing the mill's northeast corner and the headrig, several feet away.

"Then there was a wall of fire coming towards me," Chayko told the inquest.

Over what seemed like 20 seconds but was probably much shorter, Chayko tried to turn the other way, fall to the ground and cover himself. But he was too late and the fire hit him. Like Germyn, Chayko suffered burns to about 40 per cent of his body.

"It got very windy, very hot, the fire passed and I finally hit the ground," Chayko said.

The lights had gone out and it was pitch black, but after 31 years at Lakeland, Chayko was so familiar with the building he "could almost exit in the dark."

There were also spot fires throughout the mill and he could see his exit. Rather than using the doors he had been looking at, Chayko ran around the fires and went down to the basement level where he met up with Germyn.

They found the walls along the plant's south side had blown out and were laying on top of some lumber piles. So they ran under the walls and made their way to a mustering station between the sawmill and planer, then decided reaching the planer mill would be a safer option.

Apparently among the first to show up at the location, they got some looks of shock from the workers in the planer mill.

The lights soon went out there, so Chayko went over to the mill's energy system where he met up with a few others who made it out but were quite severely burnt.

Germyn, meanwhile, found himself at the main office from where, as the only first aid attendant on the scene, he guided two co-workers out to the ambulance parked on River Road. Chayko and two others also made their way out to River Road.

As Chayko and Germyn were going south, Curtis Ducharme was making his way along the building's north side looking for a route out.

One of Ducharme's responsibilities was to crawl under the large headrig and clean out the log bunks, sweeping debris into a conveyor to a chipper below, while Glenn Roche, one of the two men who died in the explosion, would use a blower to clean dust off the machinery up above.

For Ducharme, the first sign of trouble was a loud noise, like a jet engine starting up.

"It was just loud and fast and for whatever reason, I closed my eyes and went down to the floor," Ducharme said.

Unaware of just how big the conflagration turned out to be, Ducharme remained there, expecting someone would come to his rescue as he screamed for help although there were signs of serious trouble.

"I could see flames rolling over top and by me, the metal was hot, pretty red," Ducharme said.

His safety glasses started to heat up his face and his plastic earmuffs were melted to his ears, he threw them off but the heavy, work-style jacket he was wearing seemed to protect him from the flames.

Finally, "survival mode" kicked in and Ducharme started crawling, at first towards a row of motor control panels along the north wall but then away after he burned a wrist on some hot metal.

He took a new direction and squeezed through some bars and underneath the main machinery.

From there he crawled out onto a deck and moved towards an open door on the north side but because he was on the main floor he would have had to jump.

Ducharme searched for a new route, letting the sprinkler system wet him as much as possible before he went any further. He made his way to the basement level where he checked various doors before finding a room with lights on and found Roche who turned out to be so badly burned, Ducharme thought he was wearing coveralls.

As Ducharme was considering his next steps, Donald Zwozdesky, an electrician at the sawmill, popped his head through small opening that had blown out and told him and Roche to get out. They did and, while Zwozdesky stayed behind with Roche, Ducharme joined a group near the planer mill where he received oxygen and hopped in a pickup truck for a short trip out to River Road.

Ducharme, who also received extensive burns and now deals with post-traumatic stress disorder, returned to work just three weeks ago and is on vocational rehabilitation.

Neither Germyn, who also has tinnitus or ringing in the ears, nor Chayko have returned to work.

As a United Steelworkers local 1-424 vice president, it was only the second time Brian Croy had been in Lakeland's sawmill although he had often been in the main office for meetings with management.

He and Myrte Turner, a Prince George human resources specialist, were there to talk to employees about a training program.

Just before the lunch whistle blew, they made their way into the lunchroom and were waiting for employees to file in.

As they stood off to one side, Croy heard a loud bang, "like a metal lid slam."

Because he had talked to workers who went through the explosion at Babine Forest Products three months before, Croy "instantly knew the mill had blown up."

A "flash and roar" followed and Croy hit the floor as quickly as he could, "and then it was really quiet."

The walls had fallen in and thick black smoke filled the air. As Croy began choking, he heard a voice saying "put your face in your coat," which he did and it worked.

A gagging Turner then followed his advice and she seemed to recover.

Then suddenly, just as it was so dark and black only moments before, the air cleared and they could see their way. He and Turner had to climb over a pop machine that Croy thought saved them from being crushed by the walls and, after hearing a small explosion off in the distance, decided it would be best to get out.

Croy left with some reluctance because he was worried another employee was trapped underneath one of the walls. He had called for him five or six times but there was no response.

They couldn't use the route they took to reach the lunchroom in the first place, and finding another direction was not easy. At one point they came across wiring hooked up to the larger motors that started shorting out, snapping and throwing sparks onto the sawdust.

They changed direction and came across a motor that shorted out in front of them and blew up.

So they went back the other way and just kept walking and finally found an opening where the wall had blown out. Once outside, they joined a group of employees who were making their way to a muster station. To Croy's relief, upon reaching the station, he found everyone who had been in the lunchroom got out.

Like Croy, Germyn quickly knew something major had happened.

Through an in-law, he heard stories about the state of Babine and what had happened and became convinced Lakeland would be next.

The day before that incident, there was a major fire at the large headrig that Germyn said sent a plume of dust-fueled flame up into the air. Germyn, who was the one who "rained extinguisher" on Roche and small headrig operator Brian Primrose as they used their own extinguishers down below to knock out the flame, told others that if both headrigs had been operating, it would have been worse.

"We were one machine away from blowing up," Germyn said.

In January, Greg Stewart, president of Sinclar Group Forest Products which owns Lakeland, held a meeting in January with workers in the sawmill and planer mill and told them they have the right to refuse unsafe work.

"And if you see something unsafe, report it to your supervisor," Germyn said when asked about the meeting.

Germyn said he did as much, as many as 11 times, but said he was not taken seriously. He also talked to a union representative and was told the issue had been raised with management.

The inquest continues today, 8:30 a.m. start at the Prince George courthouse. B.C. Safety Authority official Jeff Coleman is scheduled to testify and the session is scheduled to last a half day.