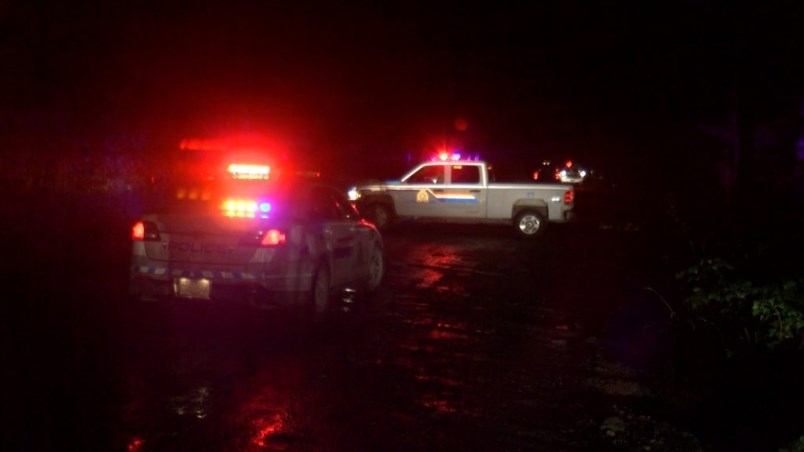 RCMP at the scene of a serious bus crash near Bamfield. The crash occurred on Sept. 13, 2019. (via CHEK NEWS)

Two University of Victoria students died and three others were taken to hospital in critical or serious condition after a bus rolled over between Bamfield and Port Alberni on Friday night.

The university's administration was informed last night that two students died and several were injured as a result of the crash. The bus was travelling to the Bamfield Marine Sciences Centre, on the west coast of the Island. The university is not identifying the students who died.

Jamie Cassels, president of the University of Victoria, said the university is deeply saddened.

“Our heartfelt thoughts go out to the students’ families and loved ones, to whom we offer our sincerest condolences,” Cassels said an emailed statement. "We also thinking of those injured in the crash.”

The university is offering counselling and other support to the students and others in the university community who might be affected, he said.

The bus rolled over on a gravel road near the Carmanah Main Junction on Bamfield Main, and went down a 20-foot embankment, landing on its side.

It's not clear how many people were on the bus. Reports from authorities range from about 40 to 48.

Wilson’s Group, the owners of Wilson’s Transportation, confirmed it was their bus in the crash.

“Our immediate concern is with the passengers, the driver and their families,” said Samantha Wilson in an emailed statement. “Management is working with authorities and the University of Victoria to address those immediate concerns.”

Capt. David Berneau of the Joint Rescue Co-ordination Centre in Victoria said they were contacted about 10 p.m. to assist with the rescue.

"There were two deceased on scene and three airlifted to Victoria General Hospital," he said. "There were lots of other folks with minor injuries and they were transported to Port Alberni Hospital."

Burneau said there were about 40 people on the bus, all of them believed to be adults.

Andrea Visscher of B.C. Emergency Health Services, said three people in critical or serious condition were taken to Port Alberni Hospital. They were flown out “in the early morning” to Victoria General Hospital, she said.

“Any time that youth are involved it compounds the severity of the incident for responders from that aspect and the tragic outcome of the two individuals pronounced dead at the scene made this a really heartbreaking event for the responders,” said Owens.

Port Alberni Fire received a call about the rollover crash at 9:45 p.m. It sent two rescue trucks and eight firefighters.

“The two individuals were pronounced dead fairly quickly at the scene,” Owens said. Firefighters used a rope to reach one critically injured student, who was then extricated from the bus, he said. The remaining passengers were able to scramble out of the bus and get up the embankment themselves.

Cellphone reception is “spotty” in the area, making the rescue all the more difficult.

Owens said it’s the only time he can recall that a 19 Wing Comox Cormorant aircraft has been sent to a vehicle crash to assist.

The cause of the crash is under investigation by the RCMP.

The City of Port Alberni opened a reception centre at the Echo Centre for all of those who were not injured but involved in the crash. They were later moved to a hotel, Owens said.

Students who need support on the weekend can contact UVic’s campus security services at 250-721-7599 for counselling services. Faculty and staff in need of support can contact the employee and family assistance program at 844-880-9142.

BC Wildfire Service warns online fire maps may be inaccurate
Aug 1, 2021 9:16 AM